Over the last several years, I’ve knit a lot of socks. Like, a lot of socks. Over 30 pairs since June 2010, and more before that. As I knit them, I blogged about them, and gave some opinions on the yarns I was using. (You can see most of these posts and socks if you look in the category “Self-Imposed Sock Club.” Or just say you did, so I can feel like there was a point to making categories on this blog.)

First: I only included the socks I kept; many were given as Christmas presents. Second: I’ve only included those made with yarns that you might encounter; In other words, I’ve excluded anything discontinued or intensely local yarns.

You should also know that I’m pretty hard on my socks: I put them through the washing machine on handwash or gentle cycle, and I lay them flat to dry, but I Do Not Handwash. It just doesn’t ever happen. These pictures are all taken after a fresh wash and dry, and were taken on my phone, so you see them rather at their worst, but I think that’ll give you a more accurate idea of what to expect after years of wear. All of these sock patterns, with a single exception, are by Nancy Bush. Pattern name links to my previous review; yarn name links to ravelry page.

So I give you, A Few Reviews, in No Particular Order.

Socks: “Unst” from Knitting on the Road by Nancy Bush
Yarn: Socks that Rock Lightweight by Blue Moon Fiber Arts 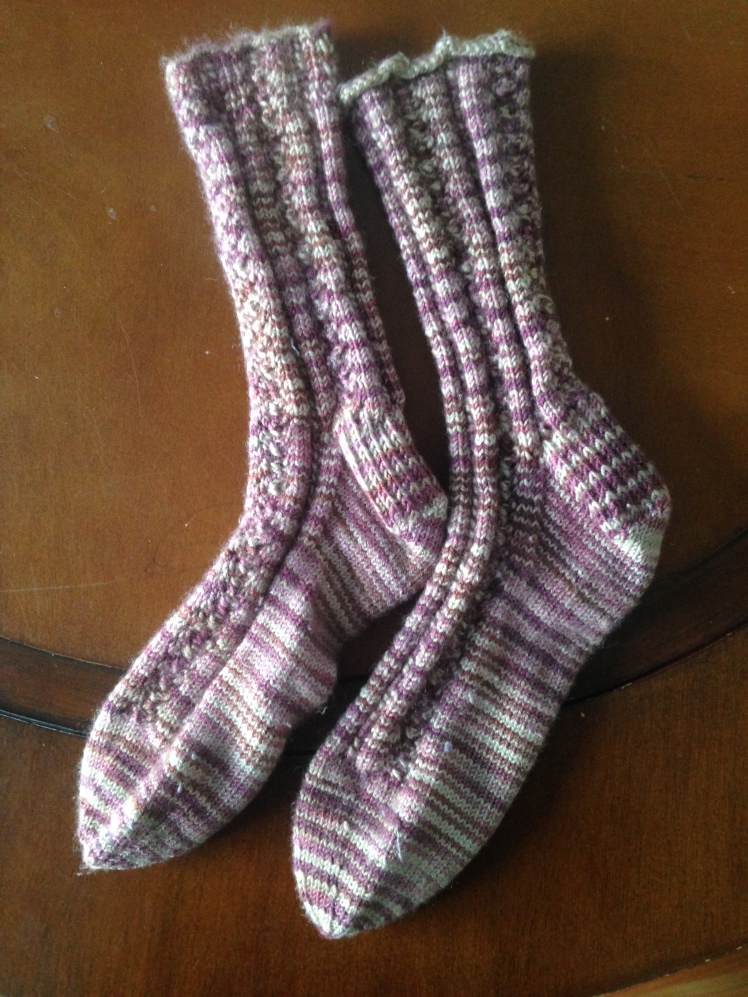 Years Worn: 1 (yes I knit them in 2013. I didn’t wear any of the Knitting on the Road socks ’till last winter. Don’t judge me; I’m neurotic.)
Opinion: I don’t wear these a lot because I knit them too small, but they’ve gotten a fair number of washings, and the yarn seems to hold up like steel. It was a slight pain to knit with since the yarn seemed overtwisted, but even the stockinette doesn’t seem to have a skew to it (maybe it was offset by the lace?). Maybe the overtwist makes it a more sturdy yarn. It has a bit of a halo to it, but next to no pilling. Two thumbs up. I’d buy it again.

Come back for the next one tomorrow!