February’s socks were knit in the first week of February. Then there was a baby. March’s socks were started, back when Naomi slept most of the time, was highly portable, and I was under the delusion that parenthood was a manageable add-on to normal life. Then March happened. Then April happened. Then May.

When actual life starts happened, the over-achiever discovers that her self-imposed goals are suddenly highly flexible. When it becomes wise to start ignoring other people’s deadlines for more important things, ignoring one’s own goals becomes unquestioned second nature. Still, when the end of May was a few days away, I decided these could at least be May socks. So I finished them a few days into June. I’m sure you aren’t fussed about it! 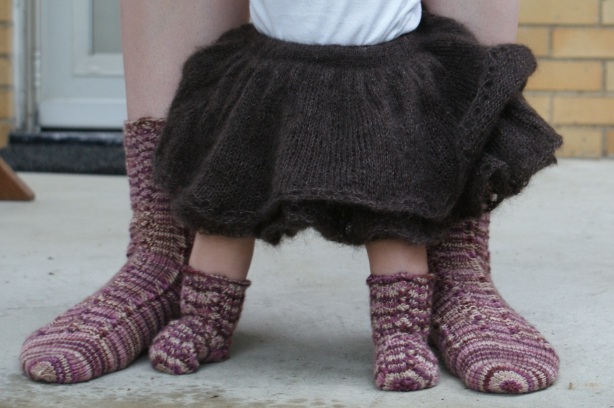 Pattern Review: “Unst” from Knitting on the Road by Nancy Bush is a pleasant enough little lace knit, if you make good decisions about gauge. I didn’t. I thought a lacy pattern would compensate for a small stitch count around the leg (56 stitches). It didn’t. I believed that Socks That Rock lightweight yarn would go well with my usual choice of Addi 1s (US 1.5). They didn’t. This isn’t really Nancy’s fault, or at least it is now apparent that for this book as well I will have to make my own judgment calls about gauge and ignore her directions about yarn and needle size. The end result is that I have a pair of socks that will be perfect to wear on long plane trips, because they will almost certainly prevent deep-vein thrombosis. If I can get them on again.

Those weren’t the only mistakes I made on these socks. I completely forgot the subtle little ribbing at the top of the second sock, and somewhere halfway down the second leg I completely lost a stitch. I’m still not sure where it went. But at that point you couldn’t have paid me to rip and re-knit. I re-positioned the inadvertently narrower column on the back of the leg, which was a little annoying, since it put the beginning of the round on the top of the foot, but I’m sure I won’t even notice.

I’ll be too busy looking at Naomi’s little feetsies. 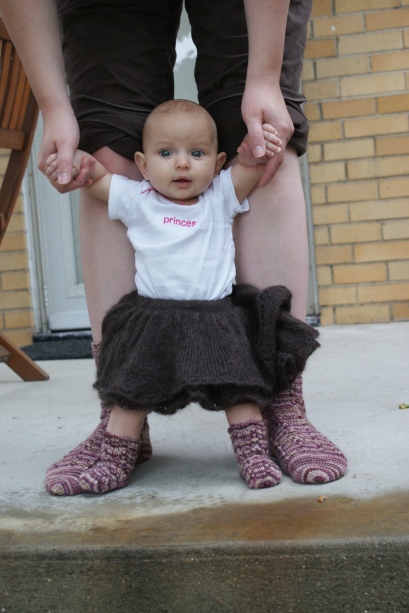 I almost didn’t knit a matching pair for the Nomes, since it isn’t a very baby-ish color, and I didn’t enjoy the pattern that much. I also didn’t want to knit tight socks for her, since her inexplicably sticky feet are already hard to get socks on. But I landed on a good solution – remember that ribbing I forgot at the top of the second sock? I decided to run it all the way down her socks, and I did only the more fun of the two lace stitches. I switched out the flap heel for a short-row heel, then felt very pleased with myself when I came up with a clever way to incorporate the toe decreases into the lace pattern. The result is very pleasing, and even goes with some of her outfits. They should fit her for at least another five minutes.

Speaking of outfits, around the same time I finally finished Naomi’s Little Brown Tutu. As predicted, I LOVE it, and she looks aDORBS. Okay, so the original idea was to match the little sweaters that my friends made for her, which she has almost outgrown and which is it too warm now to wear. But the tutu will fit her for a while (I made the elastic waistband easily adjustable), and now I have an excuse to knit her more little rose-colored sweaters! The pattern is Tutu, a very well written thing with sizes from newborn to tween, and several options for pretty hems. It takes an ungodly amount of expensive kid mohair/silk blend yarn, and requires an ungodly amount of very plain knitting, but I still deceive myself that I’ll make more of these as she grows older. How can I not when she looks so cute? (And how many babies can look like champions of girl power in a tutu?) 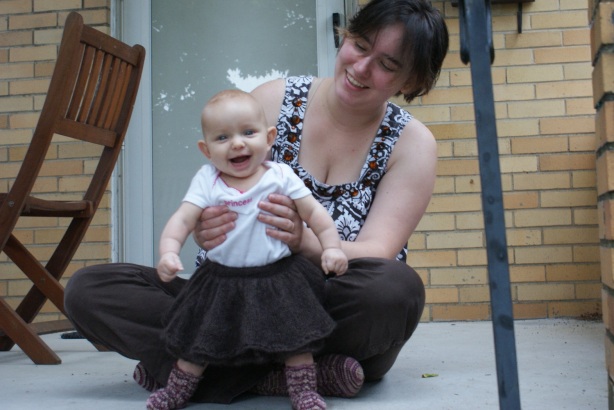 Yarn Review the First: Socks that Rock Lightweight is one of those yarns that I’ve heard about for ages, but never got around to using. I think it probably gained popularity during the years when psychadelic multi-colored sock yarns were all the rage, and the company retains a pretty intense cult following. (It helps that Tina, the head dyer, is BFFs with the Yarn Harlot.) So when I was up in Canada, visiting the YH’s local yarn store, it seemed appropriate that I buy a skein, in a color named after Oma Desala, an obscure piece of our mutual fandom. I felt like a meta-fangirl; it was a little uncomfortable. Anyway, about the yarn itself – the dyer remains committed to long repeats, which I don’t totally understand, but it worked out for both pairs that the yarn didn’t pool at all. So I really can’t complain. The yarn is intensely tightly coiled – almost overplied – which makes it not the most pleasant to work with, but it makes very comfortable (and probably very hard-wearing) socks. Would I buy it again? Probably not until I am independently wealthy, as its a little overpriced, but yes. Tina’s ways are very different from my own intuitions as a dyer, but she is much more experienced and successful than I, so I would gladly be her pupil, even if only by being her customer. 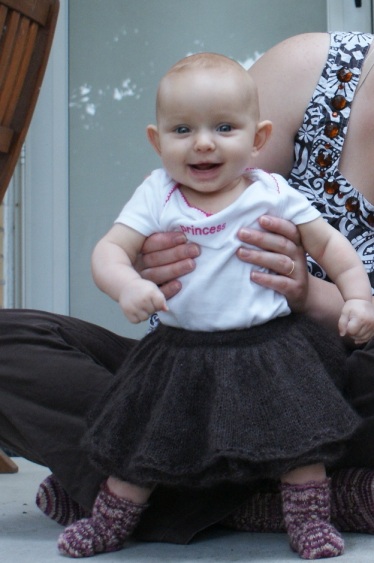 Yarn Review the Second: For the Tutu, I used Angel by Debbie Bliss. This is more or less a shameless knockoff of Rowan’s veteran Kidsilk Haze, but golly it’s soft. It’s not as bad to work with as I thought it would be, as a blend of kid mohair and silk. In three luxuriously fluffy layers of stockinette, I’m sure it feels to Nomey like sitting on a cloud. 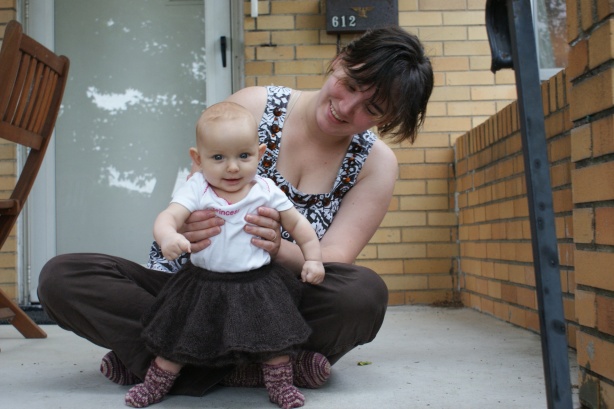 What is the verdict of the Nomes herself? She’s going through a pretty intense fabric phase, so she judged it like she judges most things: by putting them in her mouth.

So I think this passes.

2 thoughts on “March-April-May Socks, with a Bonus!”