Foosh. What a weekend. It was one of those crazy wedding weekends, in which I was about as involved as one could be without being a bridesmaid or an immediate relative, and it was so fun. Bethany, of shawl fame, tied the knot on Saturday in high Catholic fashion, and it was a good time. My pictures of the actual wedding are pitiful, but the morning before, the bride and a few other friends from undergrad went flower picking. Did you know that there are flower farms? Where nothing grows but flowers? And you can just pick what you want and pay by the bouquet? I did not know this. The results were heart-stoppingly beautiful. 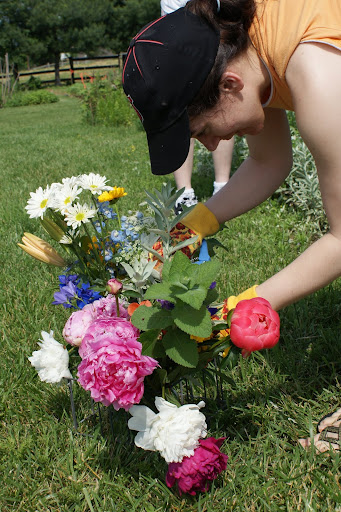 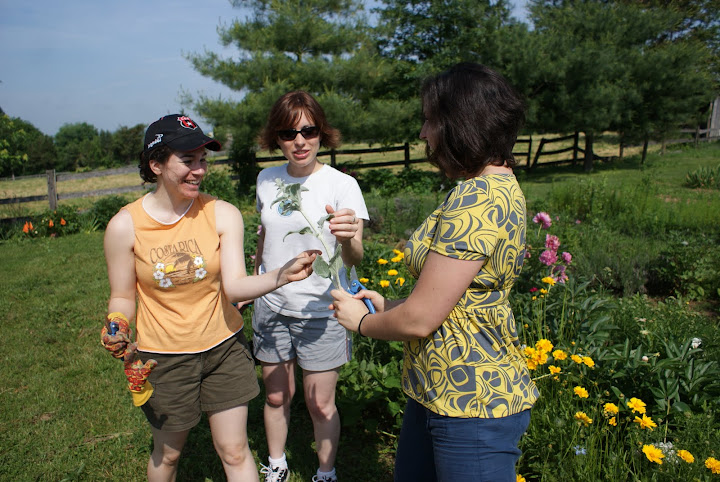 The bride is the one on the left, looking unquenchably cheerful.

Here’s the foreshadowing: I have a sweater pattern rather seriously in the works. It doesn’t have a name, and I can’t tell you much about it except this: 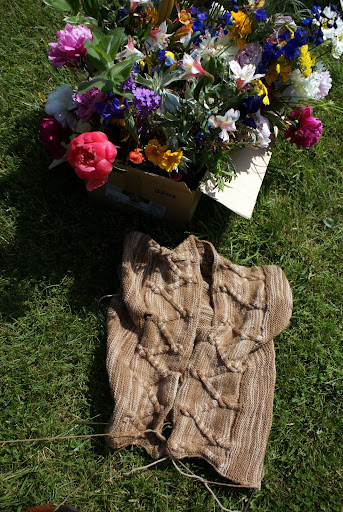 In front, it looks like a sweater knit sideways. 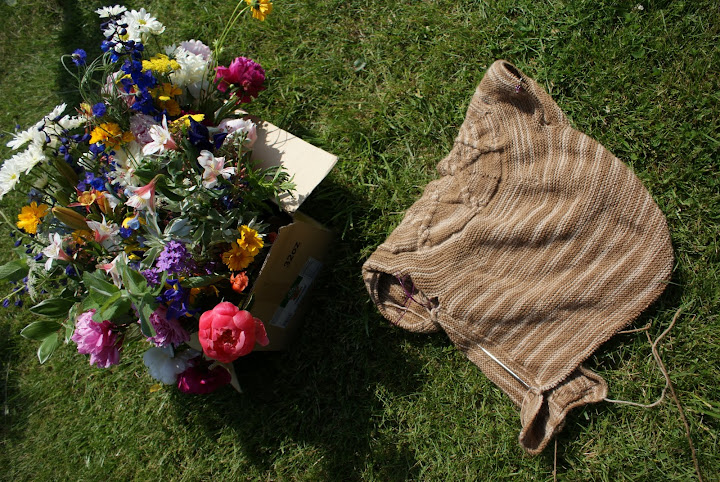 But in back, it looks like a top-down sweater with a yoke. Can you work it out?

Jared and I DJ-ed and MC-ed (no idea of the proper verbal form of those words) the reception, which was a total blast. The sweater made an appearance, 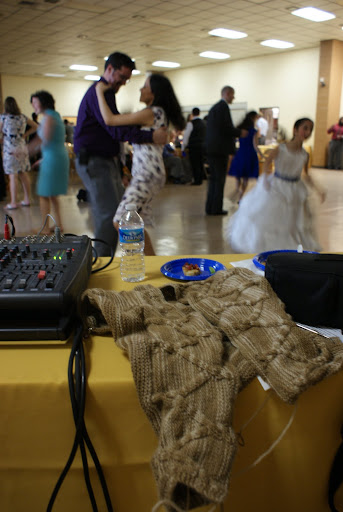 But it was not at all knitted upon, because it turns out this is a very intense job. It was so fun though – I can see how you could get a bug for this sort of thing. Jared made the music go, and I did the talking into the microphone. I like this arrangement very much.

Also, the sweater didn’t get touched because, during otherwise inactive moments, I was knitting feverishly on a Totoro hat for a sweet babe in attendance. I had neither the foresight to finish the hat before the attendance, nor the wisdom to realize that it didn’t really matter if I didn’t finish the hat right then, as it will be many months before she has any use for a wool hat. Being blessed with neither wisdom nor foresight, I finished it anyway. Unsurprisingly, said babe did not appreciate having a wool hat put on her head in an auditorium filled with sweaty bodies. She is normally very cute, so cute that posting the clearer pictures I took would be an unmerciful injustice to cute babies everywhere, and to this one in particular. So we will settle for this very blurry one, in which you get the general idea for the hat and the cute baby. 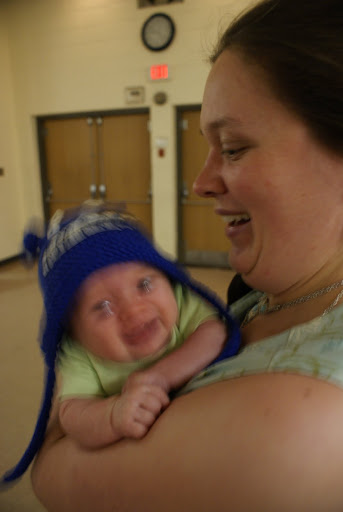 Seriously, she’s gorgeous, and it was so nice to finally meet her. Great work, CC & B-Zimmy!

While the bride and groom whisked themselves away to their honeymoon in ROME (seriously, Cathotastic) we flitted away to my undergraduate stomping grounds. We visited, we slept an inordinate amount, and we looked at more flowers. I took a buzillion pictures, as I am learning that design must be influenced by more than obsessing over the work of one fellow artist. I do not want to become a lousy knockoff of Susan Pandorf, so I am trying to stare more at nature – birds, flowers, whatever – as well as other fiber artists’ stuff. Anyway, I give you a sampling: 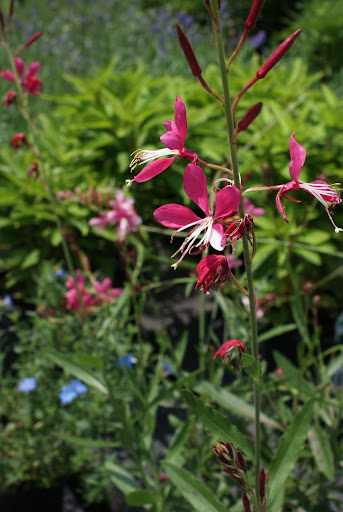 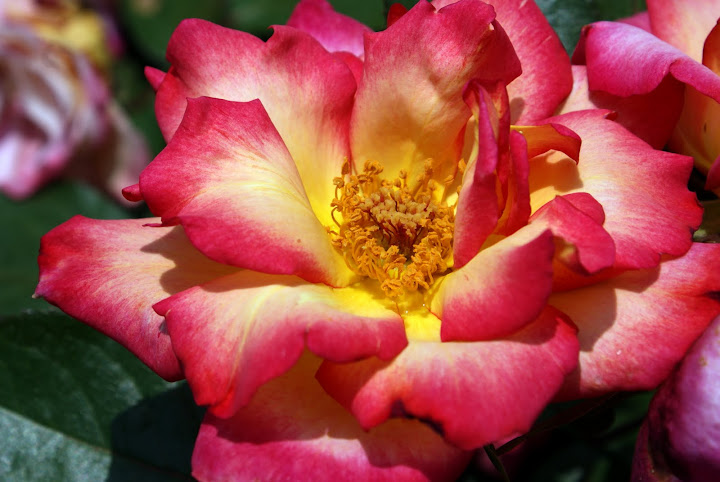 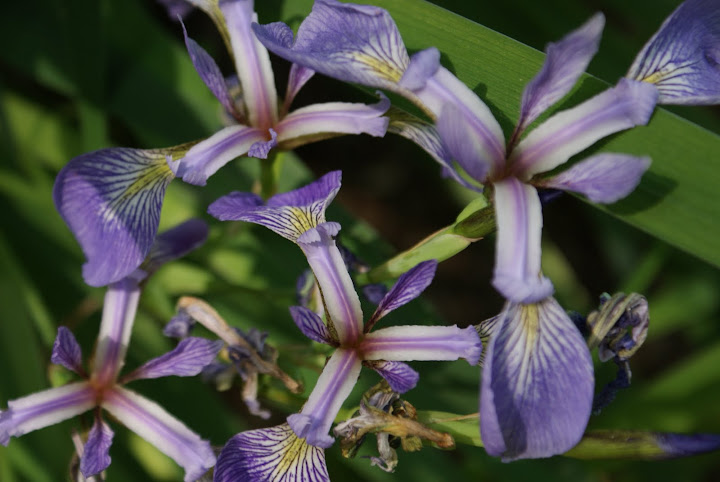 Flowers and birds are my favorite inspiration at the moment. They make so many suggestions about color combinations, sillouettes, shapes, structure, flow, and patterns. I don’t necessarily see a project in every image, but if I focus on the details I get impressions – a delicate arch here, a tiny flourish there, a spray of contrast, whatever. It doesn’t have to become anything specific, but it’s like bathing in potential energy. It’s throwing spaghetti against the wall to see what sticks, except the spaghetti glows and smells fantastic.

If flowers were my visual inspiration this weekend, then the wedding event was spiritual inspiration. A wedding should do that – draw you into the love of the Trinity extended to humanity through Jesus’ life, death, and resurrection. The community from which this marriage sprang is so replete with devotion, with active engagement in a cruciform life, that I had to stop and check myself. Where is my hope? Where is my confidence in the faithfulness of God? Seeing simple, profound faith modeled so joyfully allowed me to start floating out of a rut that I didn’t even fully know I was in.

Inspiration is everywhere, though I don’t usually have eyes to stop and see it. Task-oriented, time-conscious, efficiency-obsessed me has to be forcefully arrested by beauty sometimes. All the new life bursting forth so resplendently all around me this weekend did just that, and I am praying that it sticks.

One thought on “Flowers and Foreshadowing”