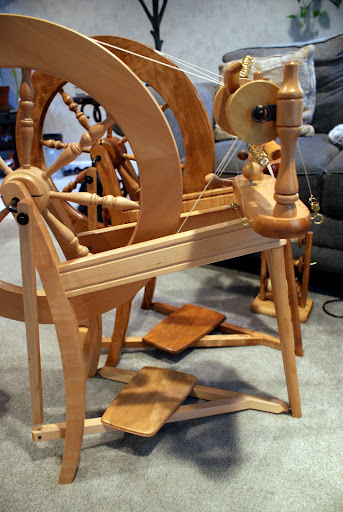 We are calling them Blondie and Redwood (Red for short). Hopefully this won’t be too offensive to anyone with red or blond hair, as both of their spinners are brunettes. 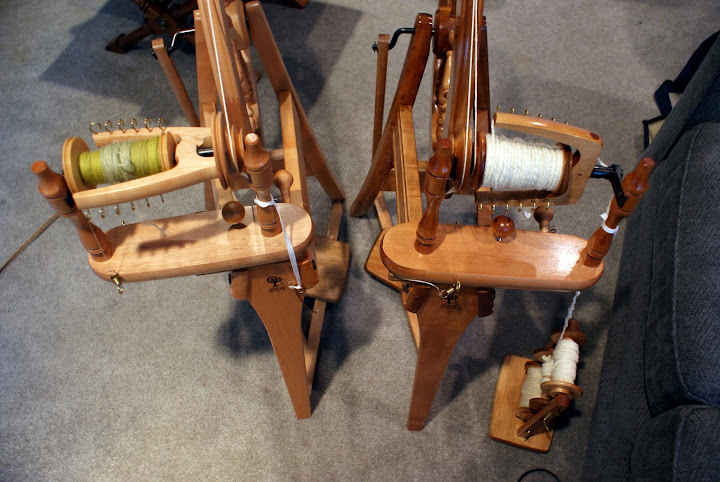 Setting them side by side is the easiest way to tell the difference between the two flier types. For starters, Blondie (single drive only) has the whorl attached to the flier, and the whorl is closer to the spinner. Red (double drive) has a removable whorl at the back of the flier, because the drive band has to be able to attach both to the whorl and the bobbin.

The way spinning works is fairly simple: the drive band (the white string) goes around the drive wheel (the big wheel) and the flier (the thing with all the hooks). The yarn-in-progress feeds through an orifice at the front of the flier, allowing it to be spun around without getting tangled. The yarn is wound onto the bobbin by virtue of the fact that the bobbin is spinning at a different rate from the flier. This speed differential can be accomplished different ways, which is why you have different kinds of wheels. 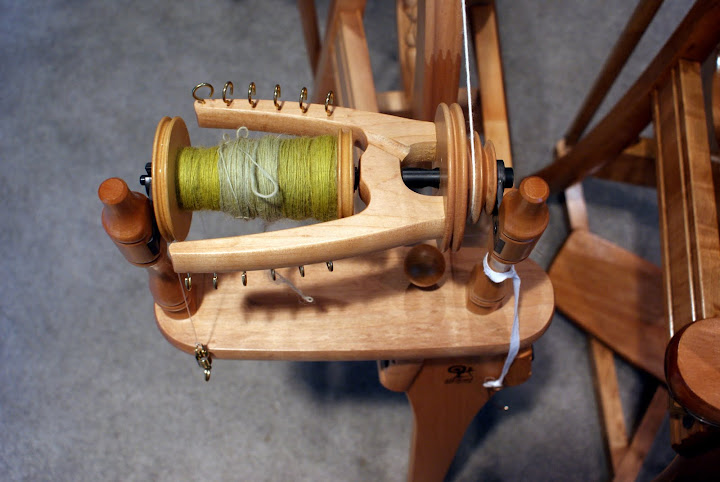 Observe Blondie. She’s a scotch-drive-only setup. The drive band spins the flier, and the bobbin is made to go slower than the flier by a brake: the brake is a little plastic cord you can see going over the back of the bobbin, attached to a hook. On the other side of this assemblage, there’s a spring and a handle which allows the brake to be tightened or loosened, increasing or decreasing how hard the bobbin pulls on the yarn in progress. This set-up – drive band on whorl, brake on bobbin – is called “scotch tension,” and is one of two ways to do single drive. 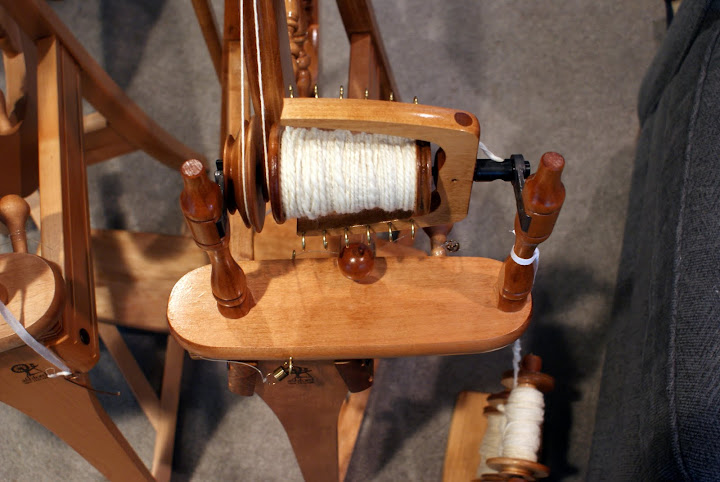 This post is sweet revenge, brought to you by all my friendships with engineers. 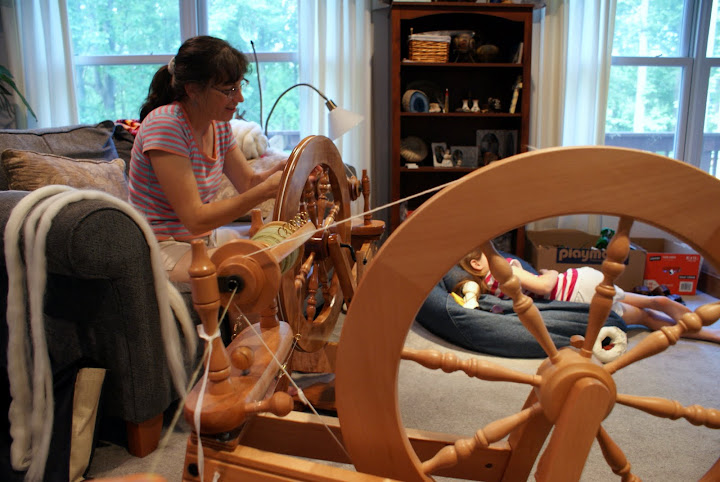 Mom and I spent yesterday afternoon geeking out about spinning. I got to see all mum’s new handspun, and discuss drafting techniques and wheel setup. I filled a bobbin through Avatar, mostly spinning like this: 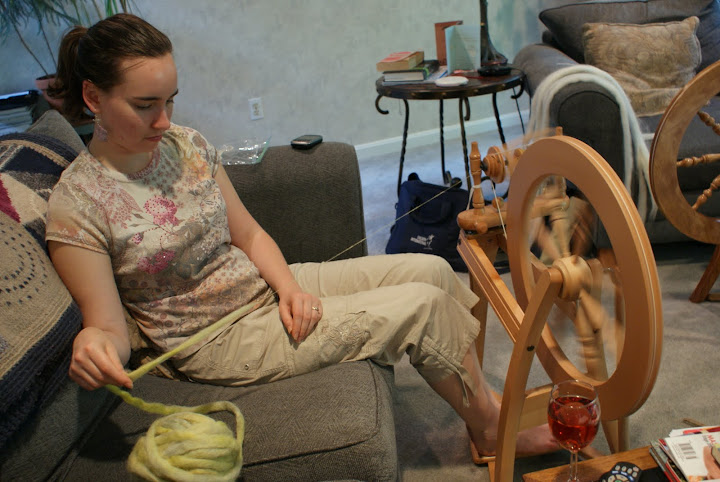 This is my first attempt at woolen spinning, and I’m pretty proud of myself for figuring it out. I need a real class, though, because it’s rare that I could entirely let go of it. Really, I mostly did a semi-supported thing like this. 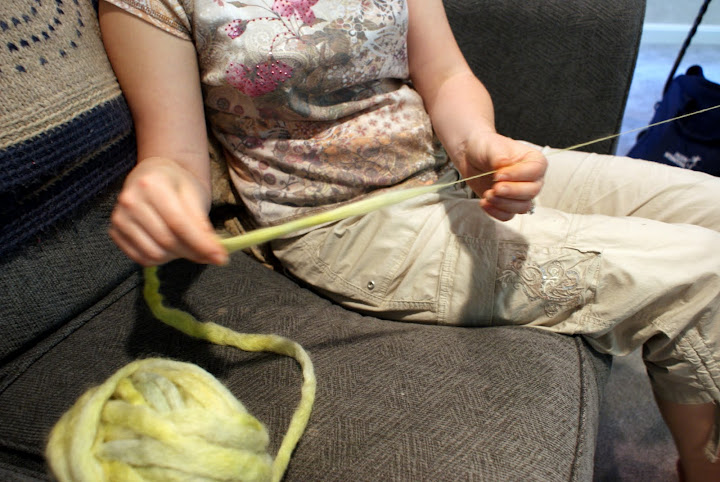 Sometimes my left hand doesn’t have to do anything, an I’m more or less woolen spinning. But it’s handy for my hand to be there, so I can smooth or pick out nupps and VM, and do a little drafting when I run into felty bits.

We do still have a brunette in the family. Doris came to mum’s house to live for a while, and Bethany learned to treadle. 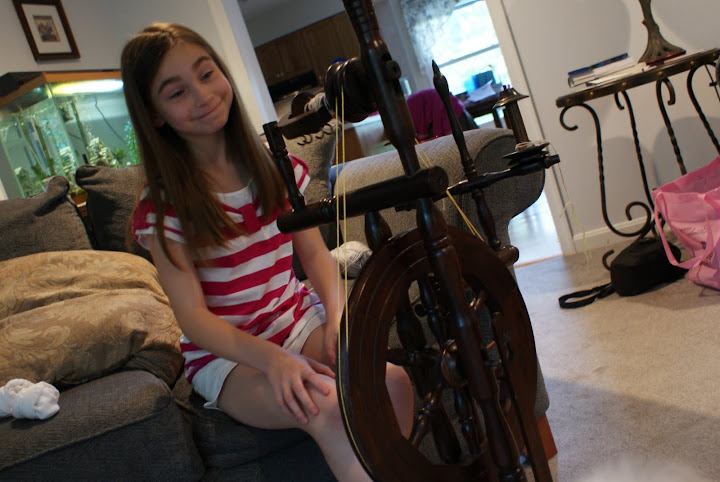