It’s New Year’s Eve, and I’m blowing my nose. I have the rare gift of a bit of time to work while it’s still light out. The sky is hovering between pastels and that dark periwinkle I’ve come to love. A new year is coming.

One of my Wool n’ Spinning compadres, Becca, inspired me to take a little time to reflect on a couple of questions. Mine are: What have I learned about my crafts this year? What have I accomplished? And what do I hope for the next year?

At this point, I have four crafts: Knitting, Spinning, Sewing with skins, and Writing/Vlogging.

This year, all of my crafts have taught me:
* There is great reward in being slow and attentive, in ripping and redoing, in sampling before starting. There is a trade off between speed and excellence. It’s OK to choose speed, but really, I’d prefer excellence most of the time.
* My time is precious. These are the best years of my life. I don’t have a lot of crafting time, because I am with small children, at a unique stage of their lives to be loved. I look at hundreds and hundreds of patterns and projects per year, but no matter how I deceive myself, I will only complete a few. When I start a new project, I need to always be asking myself: How do I want to have spent these years? What do I want to make this year, in which many big things will happen in our family? Which leads to:
*It’s OK not to finish. A couple times this year I have started things that I realized were just not good fits for this time in my life. I have just left them on the needles/on the wheel/in a draft/in the freezer. I’ve never intentionally hibernated anything before, but now that I’m understanding the real life/real people reasons why I am hibernating a thing, there’s no threat of guilt. There’s no reason I ought to finish my Fantoosh. There’s a very good set of reasons why I want to sew my husband new boots.
*I work in seasons. There is a time for sewing and a time for spinning, a time for stockinette and a time for fair isle, a time for vlogging and a time for banging out a post on my phone. This is not a hindrance; it’s an invitation to be creative with what is possible.

I broke my plan down like this. Totally copied what Becca did last year, btw. 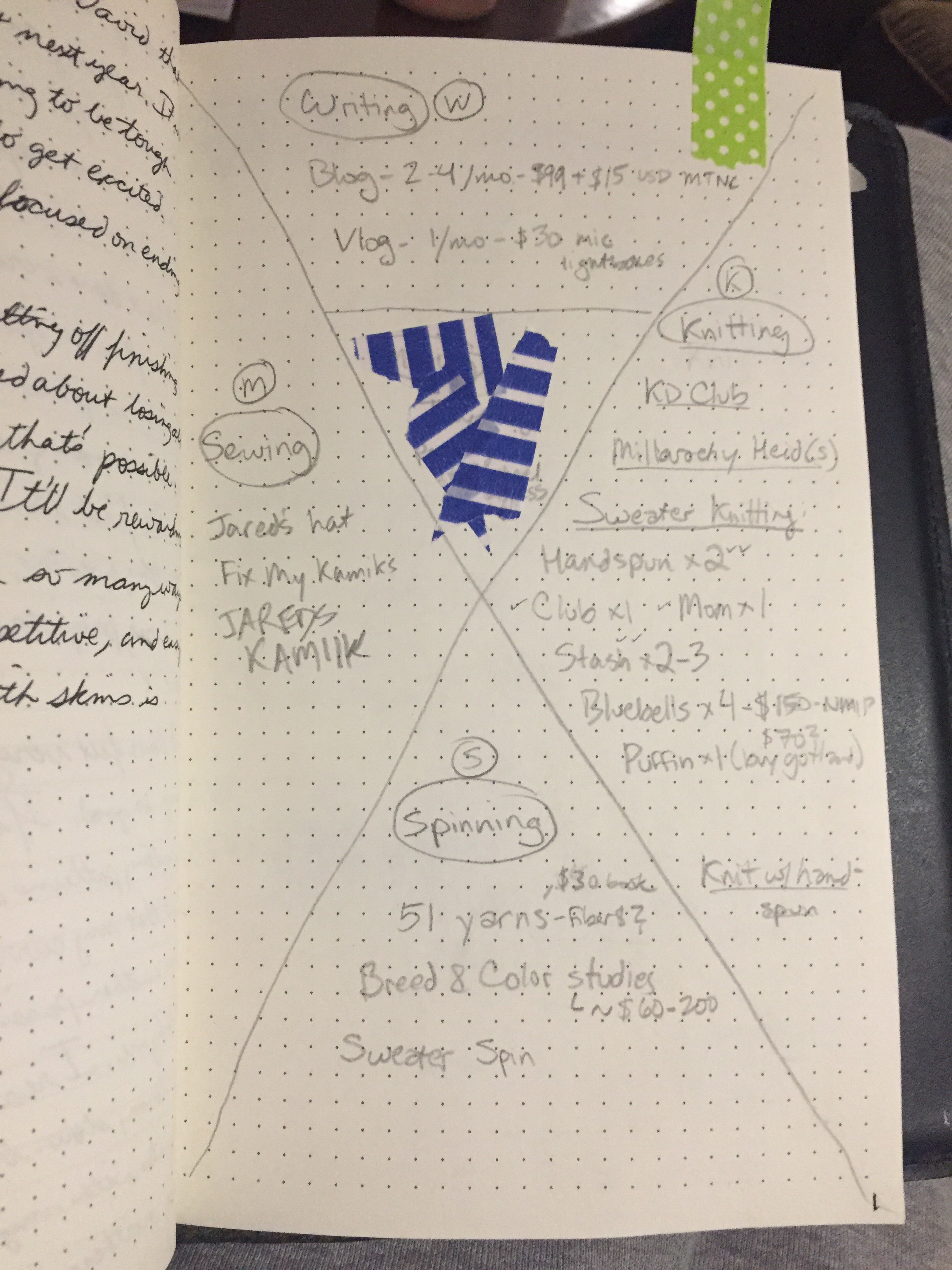 I put this first because it’s going to be a top priority for the first part of the year.

This year I accomplished:

This year I learned:

This year I wish to accomplish:

This year I accomplished:

According to my Rav notes, I finished 3,850 yards of yarn this year. This is more than I have spun any year to date, even though that was heavily weighted to the first half of the year. I learned so much:

This year, according to my Ravelry page, I have accomplished:

This year I learned:

With that in mind, this is what I would like to accomplish this year:

This year has been so nuts! This year I have:

Leading to a few learnings:

Which leads into my goals:

It seems like a lot. It was a lot to write. But one thing I’ve noticed recently is what a gift it is when we share our creative processes with each other. I’ve certainly learned a lot from the creative processes of others, as you can tell. A year is a long time. These goals came out of a sort of creative budget I made for the year, looking at how the wishes and intentions I have might map out on this year. There’s room to fill in details. I kept it all in pencil, so I can adjust. If new opportunities arise, hopefully I can look here and decide what to let go. 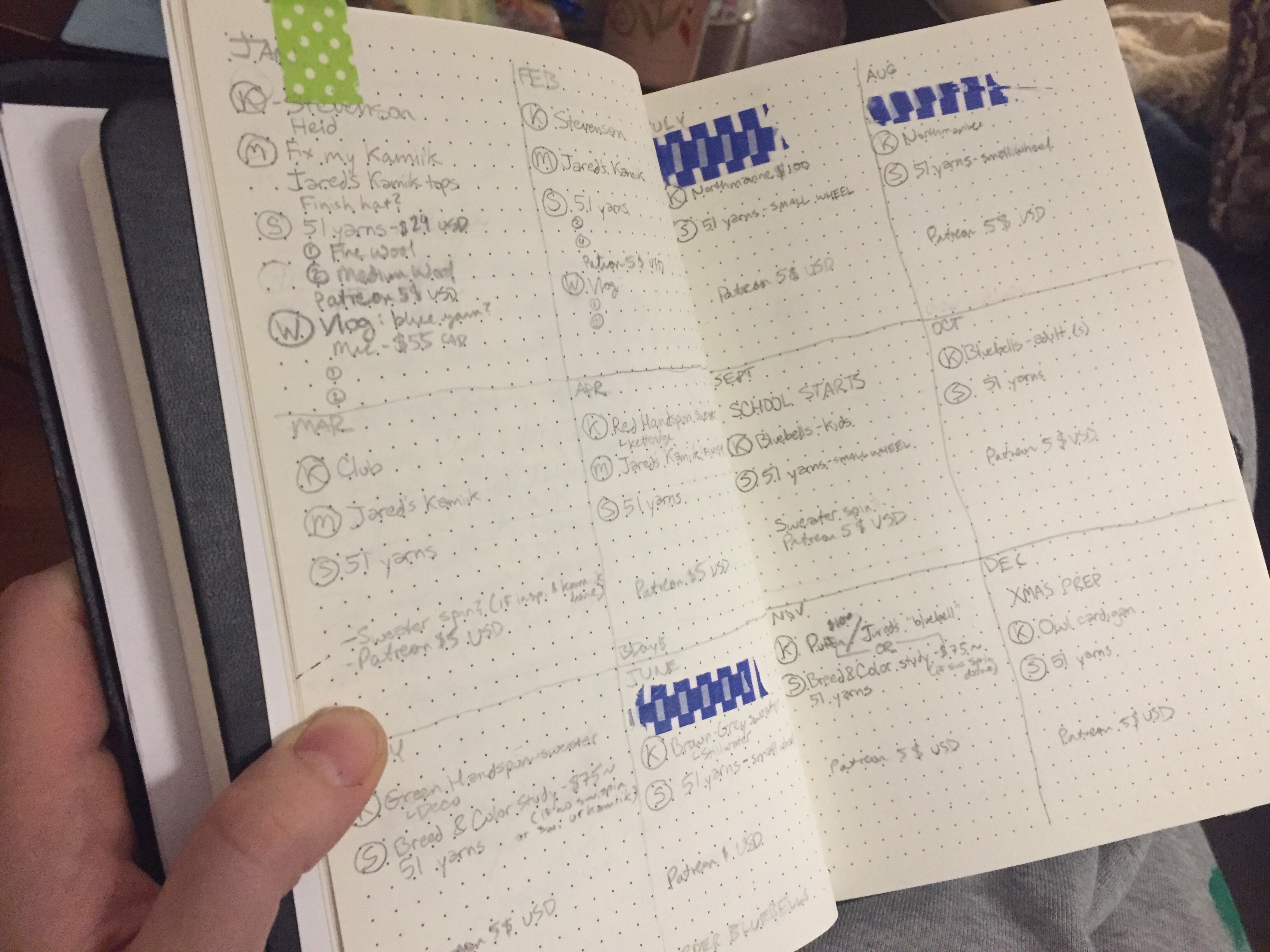 This is not a list I’m going to check off. It’s a starting point. The fun part in December will be seeing how 2019 surprises me. Thanks for reading. If you made it this far, what are you looking at for 2019? Do you have an end of year reflection traditions?