After posting a pretty intense set of goals at the beginning of the year, I thought I’d let you know how things are going. 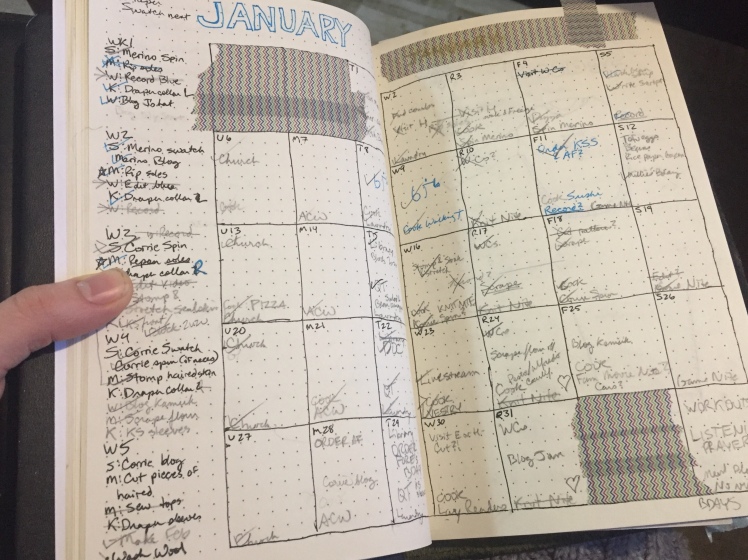 I’ve tried bullet journaling before with limited success. I had another go this time, making a monthly spread with weekly goals on the left side. Then I made daily lists when I felt like I needed to.

I had a gorgeous surprise in my kamiik getting done really quickly. After that I turned my attention right away to starting Jared’s kamiik. The work this month has been softening the haired sealskin so it’s ready to be worked. That’s what I’ll use to make the legs.

It was already clean when I received it. Softening it involved making into a ball and stepping on it, working it by hand with a special tool, spreading it with a flour paste with dawn and chlorox, then scraping it off when dry. It went from being about as stiff as a thick piece of food grade plastic, to soft enough to be rumpled in my hand. I had a lot of guidance through this, as usual. I got permission to and pointers for cutting the pieces out this week, and I’m hoping to start sewing soon – though I still have to figure out what I’m making the top part of the foot out of.

One step – and one visit with my friends – at a time. I’d love to have these done by Jared’s birthday at the end of April. I have to be patient this time.

See my two posts about my two first 51 Yarns samples: fine and medium wool. I’m very pleased with how quick these went; makes me think I’ll stick with it. I might not always get to swatching or blogging them all, but if I can spin them at least I’ll be happy enough.

So you know how I wanted to knit a sweater a month? I thought that was going to be the first goal to get dropped. But then the first pattern for Kate Davies Knitting Season club came out, and I cast it on right away. It’s done now! Expect a post on it soon!

The first thing to get dropped, it turns out, was the Vlog. I spent the first couple weeks of the month struggling with it, and running into so many roadblocks that it was getting frustrating. I realized eventually that it’s just too many learning curves for right now, and at this time, I’m not doing it for the right reasons. I may have a good vision for what I want to do, but this isn’t the time. So, bye for now, A Priest Crafts! I may have just bought the microphone, but frankly, I’ve made more expensive mistakes.

I’m not setting specific writing goals now, so I won’t write more about this category for the time being. Posting about projects happens an average of once a week, and I’ve been journaling a little every day, so that keeps me in enough practice.

As I started plugging away at these bigger goals, learned so much about how those goals have to interact with the normal stuff I have to do every day: the care and feeding of self and family. There are some things, like cooking, that I feel pretty in the swing of, and I can work meal planning in pretty straight-forwardly. I know I can’t work on a project Tuesday nights because I fold laundry then.

Other daily habits I’m not in a great pattern with right now, and to integrate them I have to raise them to the brain awareness of a hobby. For me right now that’s exercise and prayer: basic physical and spiritual fitness that makes everything else go so much better. I have to think about them every day, plan how I’m going to fit them in, and give up other things to do them. So far, I’m very thankful, as it’s very worth it.

The planner is not meant to take over my life; it’s meant to interact with it in a mutual back and forth kind of way. It helps keep me focused on what I’ve said I want to do, while facilitating regular reflection on whether the goals I’ve set need to shift.

February is a clean slate right now. But this is the calm before the storm. Bring on birthday season!

How has this month surprised you? Have your resolutions/goals/vague hopes about how the year would go materialized? Why or why not? Where do you find yourself shifting?