The first Lord of the Rings film came out fifteen years ago. Let that sink in. I saw it right around when I got my learner’s permit, and the film is now old enough to get a learner’s permit. Half my life ago. I read The Fellowship of the Rings right before the movie came out, too, and read the latter two volumes right after. These books – and the films that did so much to paint them in my imagination – have been a huge influence over my imagination for half my life. That just stopped sounding scary and started sounding cool.

I still remember sitting in the theatre during the fellowship’s trek through Moria, during that incredible moment when they step into the ancient hall of Dwarrowdelf. The massive pillars stretch off in every direction, flickering torchlight suggesting an infinite cavern. Looking back to that moment, I realize I was like Legolas many years later in Aglarond, raised in a forest, but shocked to find I was leaving a piece of my heart in a cave.

When I first saw Susan Pandorf’s Dwarrowdelf pattern, I was brought right back to that moment. There’s nothing shocking or novel about chevron shapes, but Alan Lee’s designs were so perfectly echoed in those lace columns that I was sold instantly. That was the pattern I had to have, and one of the reasons I bought that first pattern series.

That was six years ago.

Soon after we first moved to Pittsburgh, we had family visiting for Thanksgiving, and for a touristy outing, decided to go to the Carnegie Museum of Natural History. A few of us got distracted in the hall of gems, and one exhibit captured my attention completely. I’ve shared this picture before; I snapped it with for reference because the inspiration was that instantaneous. Pure white cloudy sparkling rock, with giant crystals of rose and sage rising out of it. A stone, dead as my fingernail shavings, but looking as alive as a flower. 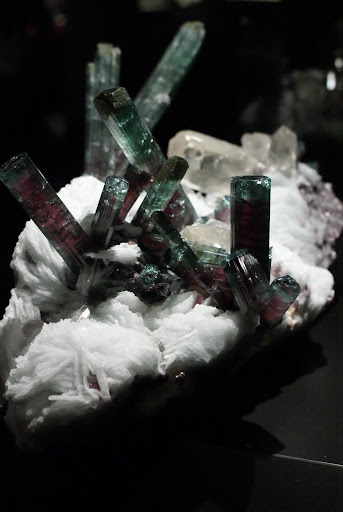 I knew instantly that I wanted those colors for Dwarrowdelf, though conceptually, the stone is much more suggestive of the flowering caves of Aglarond, the Glittering Caves behind Helm’s Deep. From my first reading, I was moved by Gimli’s heart-bursting description of the beauties he found there. The vow he took with Legolas, that if they survived the war, they would take each other to Aglarond and Faragorn, and see them through each other’s eyes, is one of the most thorough moments of friendship I’ve ever read. To love and respect and trust someone, who is so different from you, so much that you will behold something that repels you through their eyes, and learn to love it too: I have had friendship like that. That moment, then, from a cave on the other end of the map of Middle Earth, in a different chain of mountains, would be planted in my Dwarrowdelf.

That was five and a half years ago.

I had those colors in my head, such that when the yarn appeared in Yarns Unlimited a few months later, I snapped it up right away. Madelinetosh Tosh Merino Light, in Water Lily.

I finally started this insane project, knitting through all the Fellowship patterns in such a way that matched them to their place in the story, about two and a half years ago. This slow, meandering journey has finally arrived in the depths of Moria. It’s also the moment when the pace of the book suddenly dramatically accelerates.

The fellowship has tried twice to cross the Misty Mountains, and only this terrible path remains to them. Geography and Saruman unite against them to prevent a southern path or a crossing of the pass. They know that mysterious unnamed horrors await them, and it takes the Watcher’s attack sealing the gate behind them to commit them to the underground way. A week-long trek in oppressive darkness ends with the revelation of the ancient glories of an impossibly powerful old Dwarven civilization, fallen from grace, awakening a longing for what was once possible. But the horror uncovered by ancient pride is re-awakened too. Then the confrontation with the Balrog, the fallen Maiar, is Gandalf’s match: these angelic powers fall, and the fellowship’s successfully passing the mountains comes with their greatest loss. That loss, too, will lead to rebirth, but they don’t know that yet. They just have to pick up and run, streaming tears along the way.

In what I am sure is no coincidence, I bound off this six-year-long journey on Sunday night: the day before I was ordained a priest.

Ancient halls, seeming-doomed. Ancient glory, whispered and obscure, but alive in dwarf that walks there. Ancient strength, achingly beautiful even in by the faintest light, stretching out into the ancient distance. Present friendship, hardship, darkness, love, loss, sacrifice. Future rebirth, unknown but secure, and hope in a quiet sovereignty greater than any present and visible evil.

This is my world.

I am only at the beginning of learning what it is to be a priest. I understand it theologically and have accepted the calling in confidence, but in actually taking vows and accepting hands laid on me, I am now taking my first step into a larger world. A world everyone inhabits, but for weak and small and selfish little me, this is the path God had to draw me on to make me see. An ancient lineage of priests is now mine, a stream within a wider lineage of saints. Small, scared, lost, honored, humbled, hopeful, confident, curious, open. I am all those things and more.

And because I am still me, I find all these things and I stitch them. Or rather, I look at what I have stitched, and reflect on what I have read, and find that I have knit what I have lived. Story and song, image and craft, stop my thoughtless consumption and make life a thing realized.

And now, for the details: because this blogging craftspriest can’t help it. I made this pattern my own in a few little ways.

1. The center panel is not bi-directional. I just didn’t like this aspect of the pattern. I didn’t think it was necessary to interrupt the central column to make the center panel symmetrical (after all, when you look at the stone columns, you only see them pointing one way). Also, there was just no way to graft the two halves to look seamless, at least not without much wailing and gnashing of teeth. Not worth it. So I just knit the whole center panel straight up.

2. I took advantage of this mono-directionality to block that center panel, and determine exactly what my row and stitch gauge would be. I noticed online that folks were having trouble with the side panels not blocking quite as wide as the center was long. Since I was knitting the center panel more simply, I could predict exactly how wide my side panels would come out, then very easily (if only slightly) adjust the length to match. Can I tell I felt very clever about this?

3. Not a pattern change, but a change in my plans: I did not notice the color difference between my skeins until the first one ran out. Thank God I did not start with the darkest, or not notice it until last! As it was, discovering the odd skein second gave me a chance to at least make it symmetrical. The gradient technique did not do much to reduce the offending difference, and it looks hopelessly striped. But at least it’s the same. I’m holding onto that.

4. Most obviously, I added beads! These were leftover from Mithril, and were exactly what I had always imagined to match the cloud-like rock from which my sage-rose crystals emerged. This idea was so firmly implanted in my mind for years that I actually thought the pattern had beads! By the time I discovered it didn’t, it was too late. I was married to the plan. I sketched and tested and fiddled, and changed the pattern stitch ever-so-slightly so the beads would nestle just right in the column bases, but in the end I’m perfectly pleased with how they came out.

The pattern is brilliant. At first I was not thrilled with the construction; I wanted infinite columns stretching their long legs from shoulder to shoulder! But this structure means that the symmetrical architectural effect is created when you actually wear it. Additionally, breaking it up into three phases made it loads more interesting to actually knit.

Maybe one of these days I will bring Dwarrowdelf back to Pittsburgh with me, and take it to visit the stone that was so instrumental in its long road to creation. In the meantime, I have it draped around my shoulders right now, and I will wear it and think of beautiful underground spaces, ancient wisdom, present adventure, and future glory.

One thought on “Dwarrowdelf”