For the remaining Blendlings, I wanted larger quantities, and I wanted to push the color experimentation as far as I could. For a treat, late one quiet night before a big day, I finished Deb Menz’s color theory chapter in Color in Spinning, examined her color study exercises on pp. 48-50, and picked a few that I could do from the fiber I had left.

The first was experimenting with gradations in saturation. 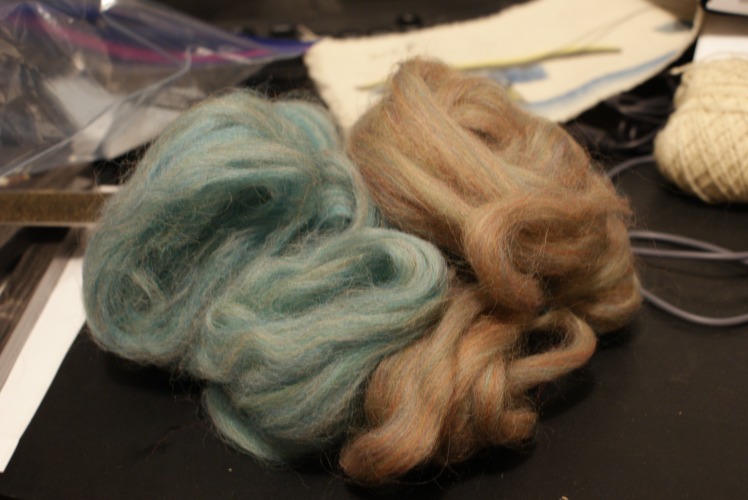 I had lots of beige left. These pictures make it look very tan, but it looks quite greyish in natural light, so I thought it would work mix it in with another color to desaturate it. I picked the teal that was closest in value to the beige. 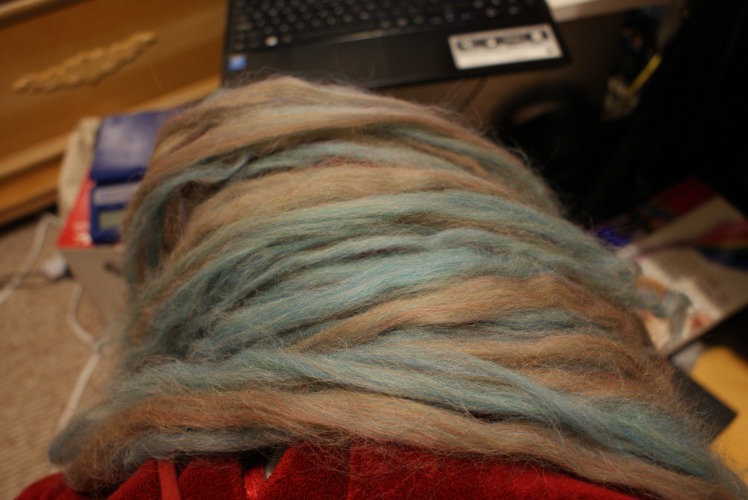 I then took each strip of color and broke it down into short lengths, combining them into mixes that slowly included more beige and less teal, in the following combinations: 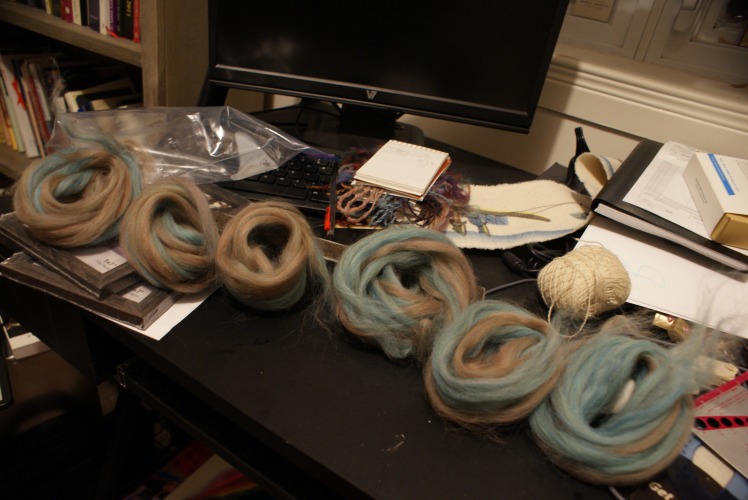 A clever plan, yes? It had two flaws: (1) the strips of color I was combining were not consistent in width. A proper experiment would change the mix by weight, and my scale is just not sensitive enough to even try with these small amounts. (2) I prepped late at night, shoved it kinda-carefully in a bag, then spun it at the end of that big day, when I was really tired. You guessed it: I mixed up some of the carefully ordered bundles. At least the last two; I may have mixed up others. 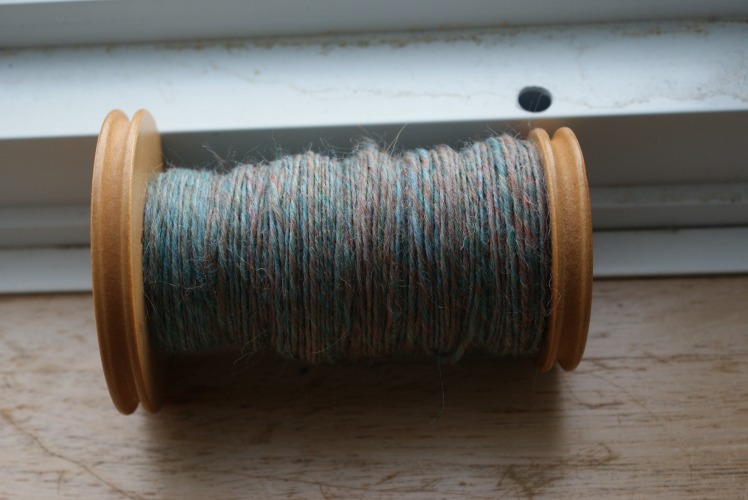 I filled up the bobbin intentionally from one end to the other, so we could see the change on the bobbin. And… you can’t see much. You can see the mostly-teal on the left, but the rest just looks like mud. 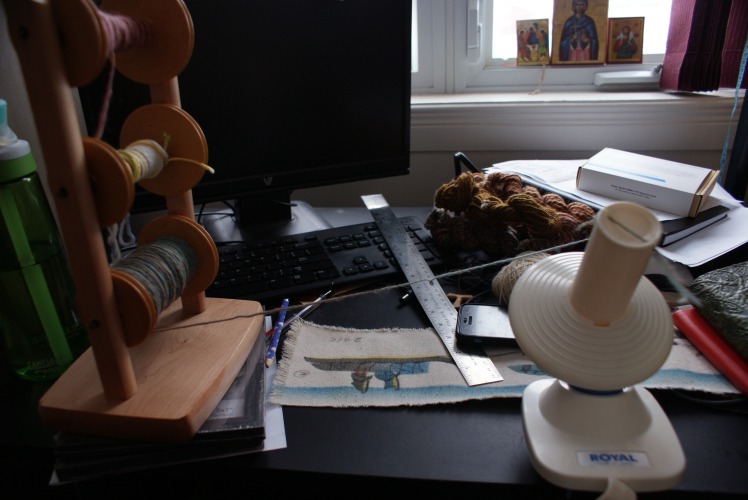 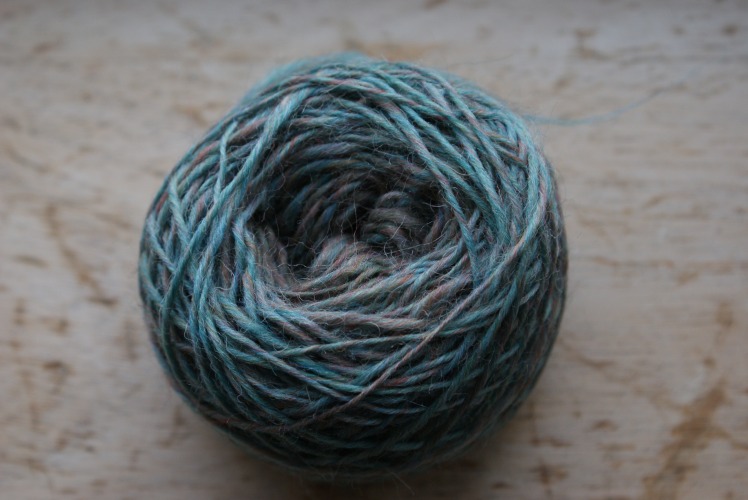 I had planned all along for the gradation to only be visible on the bobbin, and to ply from a center-pull ball, which would totally fold the gradient in half and almost erase the effect. That’s because I want to use this color with the others I am making, and a gradient would kinda stand out. It’s a good thing this was my plan, because it would have happened anyway. 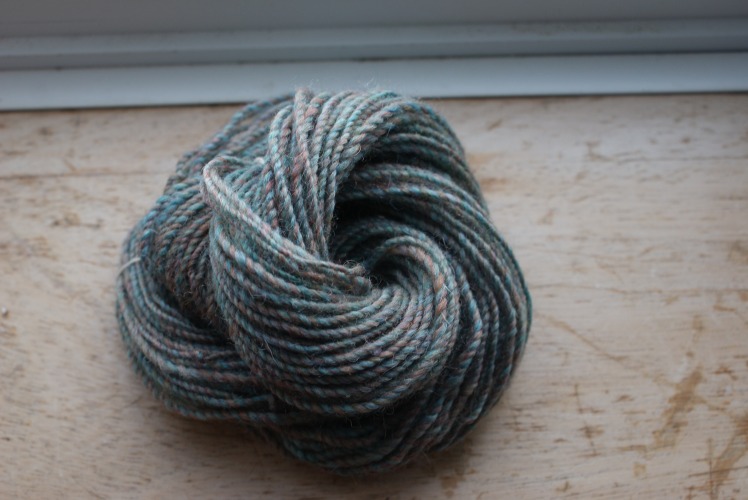 It reminds me a lot of the water lily colorway that I made Dwarrowdelf with. It’s a nice color… we’ll call it “sandy” instead of “muddy.” And it does seem kinda desaturated, don’t you think? Though more in a brownish direction than a greyish one.

For the spinning, again it was late at night, but I did my best to emulate the style I used with #10: soft singles, lots of ply twist. It ended up a little thinner than I wanted, but not too much. I wanted something fun; as I’ve mentioned twice already, it had been a long day. 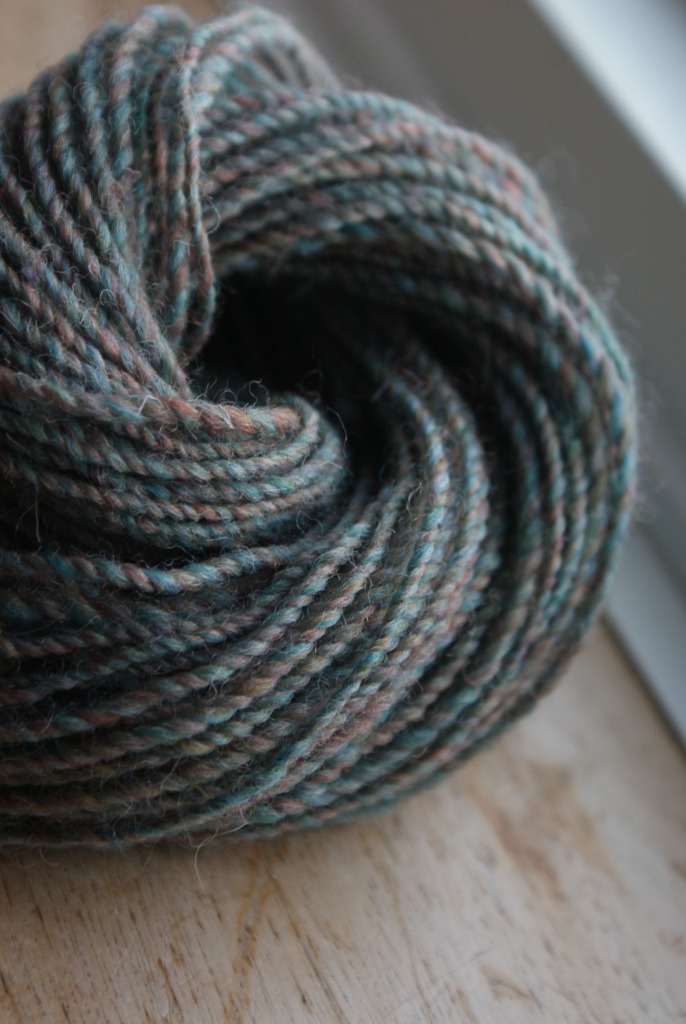