For Mother’s Day, my children gave me the best gift children can give: that is, they were healthy, affectionate, happy offspring.

Then they gave me the second best Mother’s Day gift children can give: time to myself.

Down in the land of my birth, Mother’s Day weekend is also Maryland Sheep and Wool weekend. This is providential for my mother, who, due to a series of unfortunate events, went to the festival as a layperson, and not as a vendor, for the first time in years. She emailed me a play-by-play of her Saturday shopping (oh, the shopping!) and we face-timed on Sunday during a sheepdog trial.

I tried not to turn as green as the trees in the background of the video, and channeled my envy into inspiration. After all, I have years worth of prior Sheep and Wool purchases to shop from in my own cedar trunk!

In fact, I have with me a beautiful art batt that I bought from Wae four years ago, before she rebranded, partnered with another artist, and they bought Cloverhill. I had pulled it out when I finally got my wheel assembled a couple months ago (a story in itself, believe me), just to make sure I remembered how to spin. Now, I decided, was the time to pull it out and spin in earnest.

Unfolding the batt revealed the wonderful spread of stuff carded in, in a blocky way. I knew I was going for a fairly thick (worsted-to-bulky) two ply, something I could spin up fast. I wanted variety in the way the colors mixed, but relative consistency in the texture – artsy, but not too artsy, you know what I mean?

I unfolded it to reveal a layer of rose-pink merino underneath. I don’t know anything about carding art batts; is that normal, to have a consistent layer on one side, or maybe sandwiched in the middle? I’m just curious; it’s useful to me in this case to have a plain material to keep coming back to. 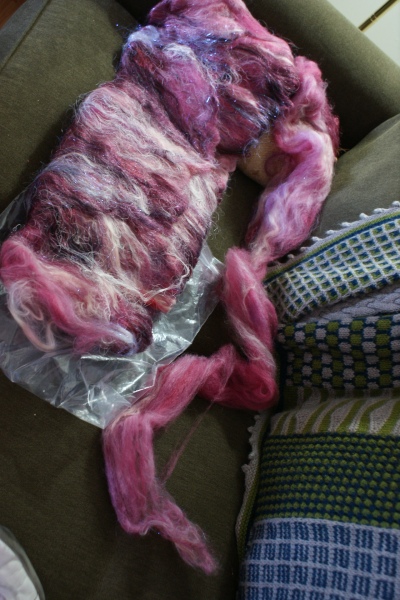 I started pulling it into strips and pre-drafting them a little. Did I need to pre-draft? The internet didn’t seem to think so, but (1) this batt has sat in my possession for four years, so a little aerating wouldn’t hurt, (2) I do want some control, since I’m going for some consistency, and (3) I love pre-drafting. Almost more than the actual spinning. I got about halfway through this process before my helper got a little too helpful.

That’s when daddy swooped in and provided some preoccupation.

I wasn’t about to waste precious spinning time trying to get my phone to play an audiobook or something, so I spun with just my thoughts to keep me company. What a novelty.

After a year’s hiatus, I got the feel of spinning back fairly quickly. That is, to spin as well as ever I did. I reflected, as the fiber flowed from my fingers, that my relationship with spinning is completely opposite to my relationship with sewing. I am pretty mediocre at both crafts. On the one hand, I sew when I absolutely have to, when it’s the only way to get some product I need, or to get it at a reasonable price, and I don’t really enjoy it. (Sorry, seamstresses.) On the other hand, spinning is an utterly superfluous activity for someone who owns as much yarn as I do. It makes a unique yarn that I couldn’t get any other way, but I do it mostly for the process – for the joy of touching the fluff and the rhythmic meditation of hands and feet as I spin.

Spinning makes me want to be a better spinner: to take classes, to craft specific yarns, to devote real time to it, but this point, I’m just a casual spinner. Right now, among my hobbies, spinning ranks a little below video games and a little above that little metal model of an X-wing I finally finished last week. It’s my fault; my own voracious curiosity  has landed me with so many avocational interests! Only I can answer the question of whether to be content being a Jaqueline-of-all-trades.

I’m obviously not getting any better, as I popped off and bought a sealskin a few weeks ago, dyed the same color family as this batt. Hm… could these two materials go together? … NO. Stop, Rebecca. This is not the time to get ambitious for some new project way beyond your skill set! Stop planning; just spin and be happy!

An hour’s work yielded the beginning of some lovely singles. My work was smooth, but inconsistent, just as planned. Hopefully it’s consistently inconsistent. You know, like my parenting.