It’s the feast of the Annunciation today. I’m still pregnant, though who knows if I will still be pregnant by the end of the day. Yesterday, our due date, came and went without much fanfare. I did find out I’ve been accepted as a postulant for ordination in the Anglican Diocese of Pittsburgh – a big landmark on a still-long journey, and one I’ve been working and discerning toward for over three years. We celebrated with ice cream sandwiches and went to bed at 9:30.

So there’s not much to do except wait. Here’s one of the things I’ve been working on while I wait.

Back in October, I posted about my current spinning project – at the time already twenty-eight months in. I told the story of the project’s inception, showed you pictures of my progress, and I showed you this picture of my beginning on the last of four 4-oz bobbins, which will be combined into (God willing) 1000 yards of cable-plied DK gradient.

My exact words were, “I am determined to finish this spinning project before my next baby shows up.”

I don’t know why I bother saying things like that. Because four and a half months later, that bobbin looked exactly like this:

That’s right. Bloggy declarations of intent aside, I hadn’t touched it since I posted that post.

For whatever reason, that changed dramatically a couple weeks ago. Maybe it was avoiding working on Evenstar. Maybe it was the desire to work on something different without starting something new. But, quite suddenly, I am now 2.5 oz into this braid, and proceeding at a fair clip. Here is about 1.5 oz in: 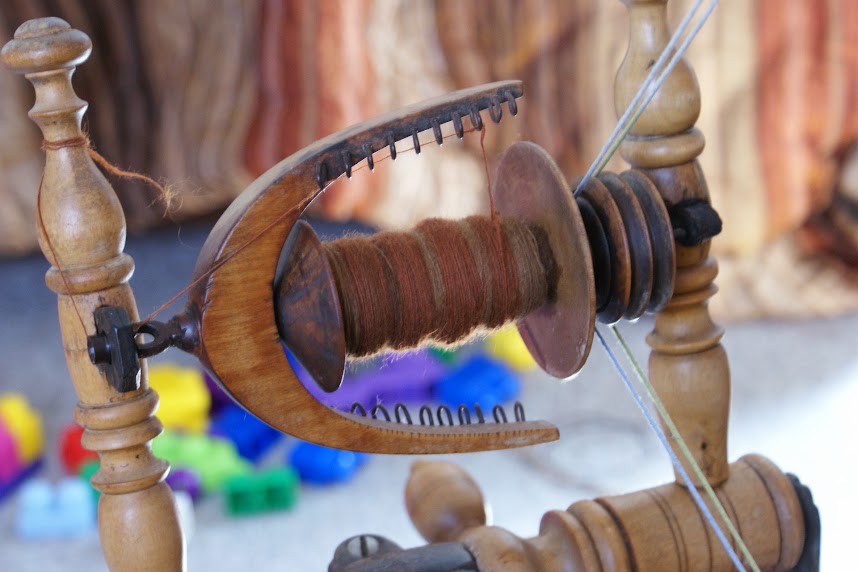 Part of my speed is that I have committed myself to be much more thorough about pre-drafting. This has made for much more pleasant spinning overall. The wool, for whatever reason, is in really bad shape. I had always tried to pre-draft some, but nothing could compensate for the constant pulling and breaking I was encountering. Now I am super-thorough, taking nearly as long to pre-draft as to spin. I pull the sliver out width-wise first, then attenuate it into a thinner piece, even trying to pull apart nupps into the cloud of fiber.

Here you can see the compressed, unhappy sliver sitting up next to the wheel’s center, and the happy pre-drafted cloud closer to the camera. 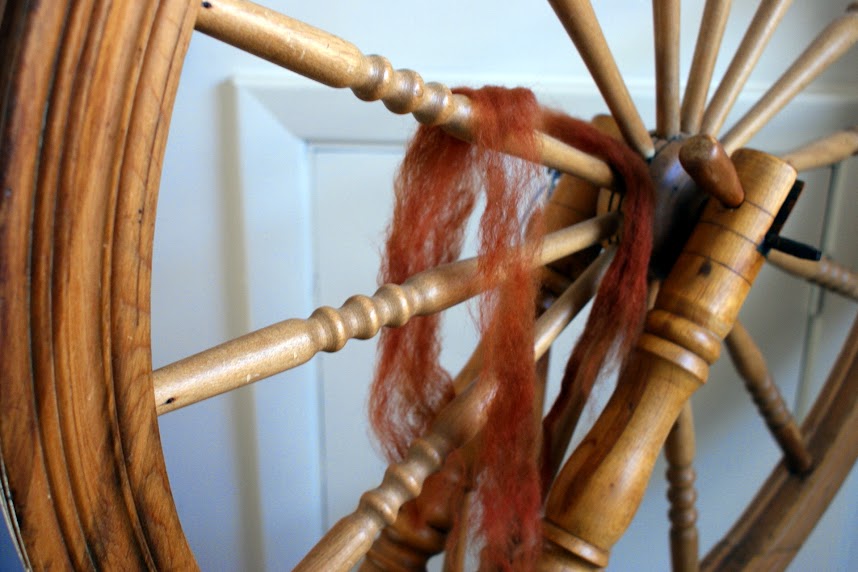 This has not only made for nicer spinning, but more convenient processing generally. I daresay N feels a little more attended to her when I am sitting by her, making little pre-drafted nests, helping her with blocks or reading her books, than hunched over the wheel stifling curses every time my thread breaks. 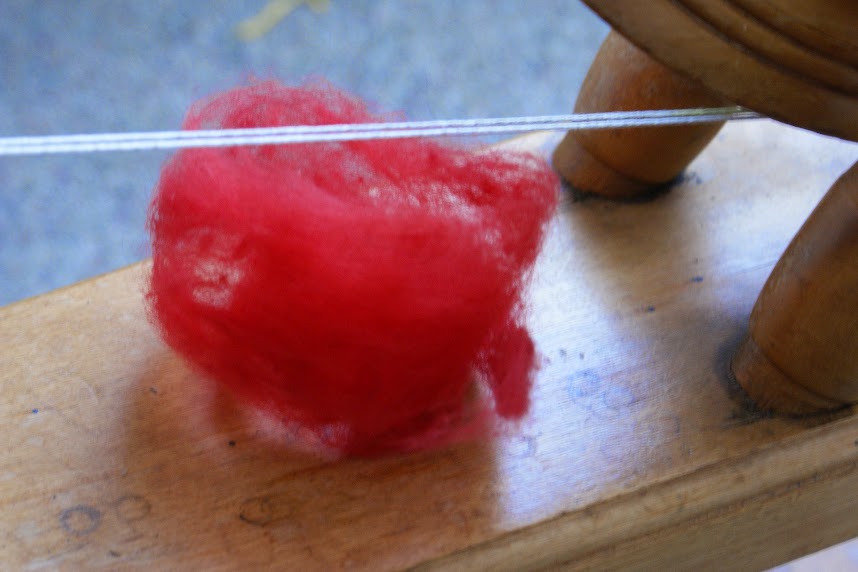 The other decision that has made this easier is that I am just accepting the yarn the way it is. More often than not, when nupps persist, I am spinning them right into the yarn, flatting them into my fingers as much as possible, but just letting them be. I’ve done my best, and there’s no point in trying to make this yarn be something it’s not. I’m just hoping that the finished yarn is in decent shape when I put the strands together, trusting the dubious aphorism that “any yarn can be balanced if it has enough plies.” 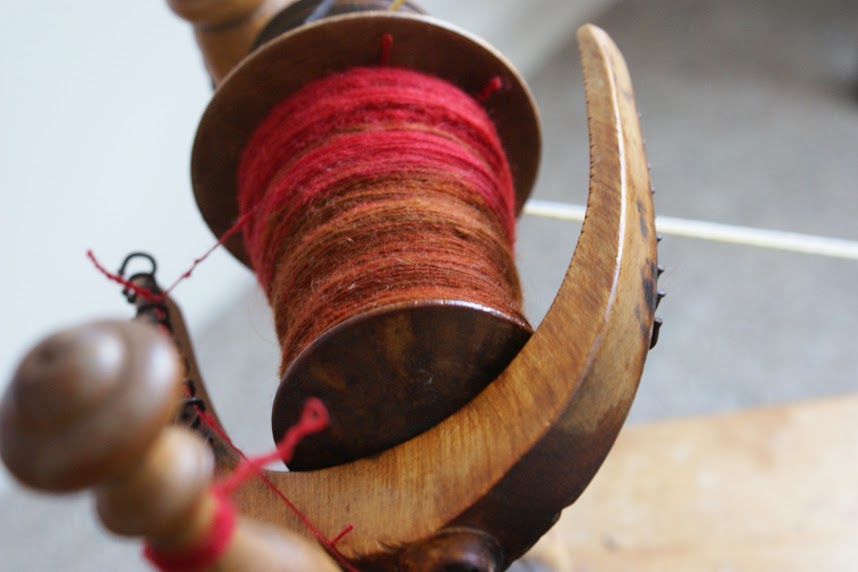 Extra pre-drafting aside, if I’m going to spin while N is awake, she has to be entertaining herself somehow. That’s where this little gadget comes in: 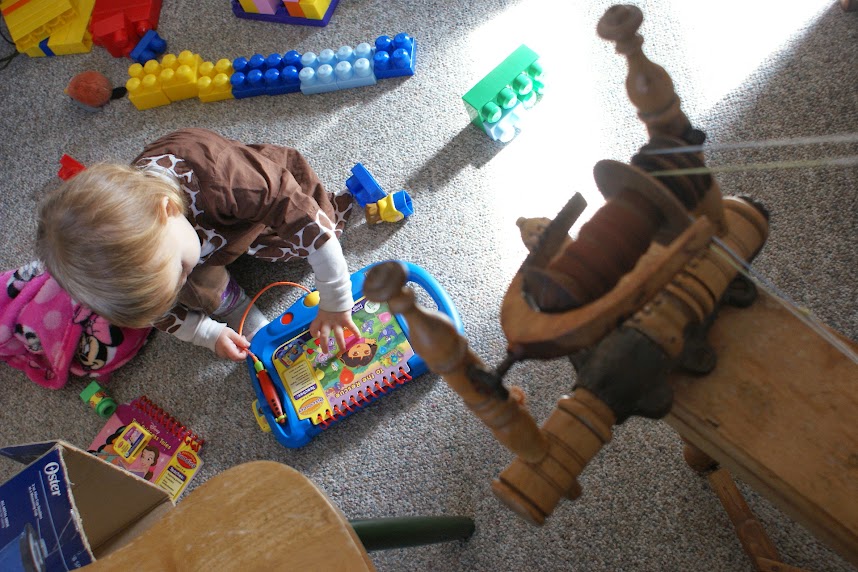 The LeapPad. This is the equivalent of today’s giving your toddler an iPad to shut them up, but the 2003 version. It’s the very same LeapPad that my now-13-year-old sister played with when she was a toddler and I was a teenager. I have vivid memories of having to ride in the rear of our minivan with her pressing the same button over and over again, not actually playing the games, just making intolerable shrill noises – memories which made me absolutely sure that my children would have no electronic toys whatsoever. Then, when N was born, and I got this exact artifact with a shipment of duplos and blocks handed down from my sister to our 7-year-old cousin and on to N, a shudder of horror went through me. I put it in the back of the attic and was sure I’d never turn it on.

But it turns out that when I’m the parent, and the noise pollution comes in exchange for a few minutes to do something I want? I can tolerate a lot. She presses the same button over and over again. Her favorite is Dora, that fabulously feminist, but impossibly shrill, little character.

Which leads me to the question – is there any good reason to give a toddler fancy technology, aside from getting them to leave us alone?

I’ll let that one hang. I comfort myself that we only use it when she brings it up, rarely for more than fifteen minutes at a time, and it doesn’t actually have a glowing screen.

In the meantime, will I finish this spinning project before baby #2 comes? I rather hope not, but I’ll keep at it. Even a tiny ounce and a half of spinning seems like an impossible amount at this point – much like waiting up to another 13 days seems like the rest of my life.

2 thoughts on “Still Spinning My Wheels – Proverbially and Figuratively”