I’m writing this post on Wednesday and scheduling it to go off on Thursday, as I have a one-post-a-day policy, but I don’t know when I’ll have time to finish this one. So I might be in labor right now while you read this. Or not! Or in a quantum state of both! Schroedinger labor!

Sometime after my “Don’t Get Me Started” post, I realized I was going about things exactly backwards. I might want to get projects out of the way, but babies? Aren’t they famously inconvenient? What I should really be doing is starting every new project I have yarn for, and she’ll show up right when I get to UFOBLE. (I just made that up. You’ve heard of SABLE – Stash Acquisition Beyond Life Expectancy. I.e. having more yarn than you could knit in your life time. I should try to get to the point of having more unfinished objects than I could possibly finish knitting in my lifetime.)

So I’m not really going to do that. Though it isn’t as if I hadn’t had the itch; I’ve been on ravelry faving as many sweaters as ever. Always a weird activity for someone who knits about a sweater a year. I got daring yesterday and started some yogurt, but that got finished, no luck. Maybe tomorrow I’ll start the laundry…

I did, however, finally start my next pair of socks on Monday. 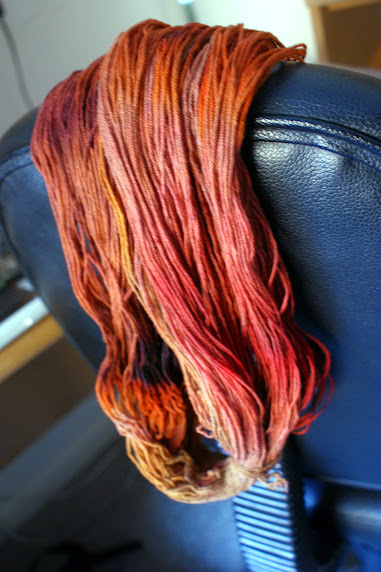 This yarn is called “Freshwater,” and it’s from a Welsh dyer called Cariad Yarn. I’ve owned this skein for nearly six years. I bought it on our first anniversary, when Jared and I took advantage of a long layover in London to do a little yarn crawling. We found a shop called “Socktopus” that carried nothing but sock yarn, and I fell hard for this one autumnal skein. It’s rather different, with a bunch of plies and a little cashmere, but seems still quite sturdy.

It’s weird, winding up a beautiful yarn that I’ve owned this long. It feels like opening an old bottle of wine. The way the handpainted colors lie in the skein is so perfect, and once I wind it up, that’s gone forever. The colors will combine quite differently in the socks, maybe in a way I don’t like as much. Would I enjoy it more, I wondered, if I left it this way forever?

I got over it.

But as soon as I wound up this pretty cake of sock, I left it to sit for two weeks. I couldn’t bring myself to cast on, as I said before, and instead blasted through my green sweater.

Then, when I finally cast the sock on, I made a little boo-boo. Preamble: I have all of Nancy Bush’s Knitting on the Road scanned into PDFs on my computer and kindle for easy access, but didn’t also scan the picture of the sock at the beginning. Also, I had particularly picked this pair of socks of the final two because it was very very plain.

I got through the ribbing, turned the page on the pattern, and saw instructions and a chart for allover cable patterning.

Out of two patterns, I had managed to cast on the wrong one. Very wrong. Despite the fact that the name of the correct pattern was written on the bag the project was still living in.

Disgusted, I ripped the sock out and ignored it. For a couple days of doldrums, I had but one project on the needles. But when I only succeeded in doing two repeats of border and nearly strained my neck, I sucked it up and cast on “Dalarna.” 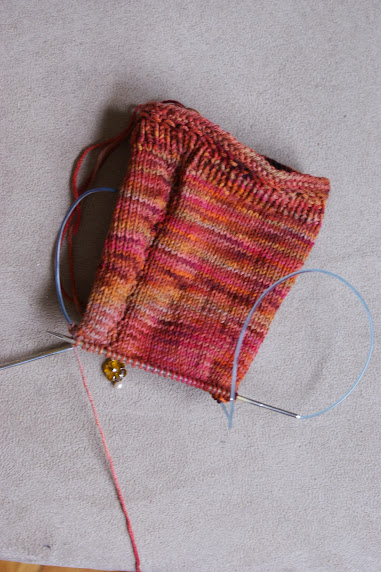 I got through the fiddly little braid at the top, and the calf decreases, enjoying the blending of these colors that I had so long admired in the skein. But as soon as finished decreasing, and was down to the main circumference of the sock, the pooling started. Terrible, horrible pooling! The fall colors I loved turning to vomit!

Does it look as bad on the other side?

Worse. UGH. I have not owned this skein for six years to knit up five inches of puke to adorn my leg.

So I ripped out the last pair of decreases (it seemed like too many anyway) and continued. There’s still a bit of spiraling, but I can live with that. 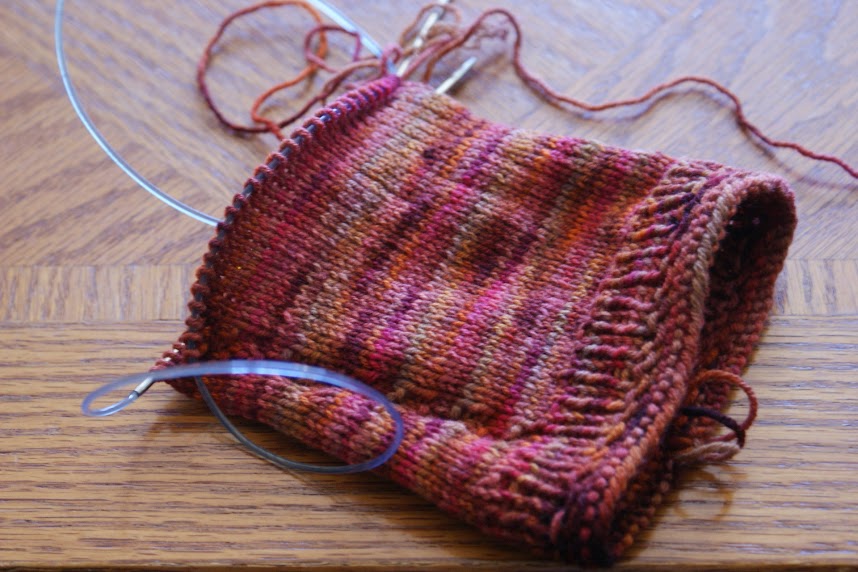 A few years ago, I would have blasted through socks like these without even noticing whether there was pooling, then shrugging it off when it appeared.

But if baby comes in the middle of this pair? I’m going to be staring at them for a while. I should make sure we can be friends.