I have been working on the same spinning project for over two years now.

It all started with this grand plan, associated with the Lothlorien cape designed by Susan Pandorf. I loved the gradient the sample was made in, but I did not want to pay out the nose for the yarn suggested. (Over two years later, I am starting to regret my stinginess.)

“Of course,” I thought, with the naivite only possible in a woman with no idea she was about to become a mother, “I’ll just dye and spin a gradient!”

I had some lovely wool of unknown provenance, given to me by a friend. It might have some mohair in it, I don’t know. In a fit of thoughtfulness highly unusual for that phase in my life, I did some sampling, and recorded the results. I spun at what seemed my most comfortable thickness for that wool, knowing that comfort would be the key to consistency, and tried different plies to see what would come up with a DK weight.

Forgive the blurry pictures; I think I was making due with a hand-me-down iPhone 3 while my DSLR was in the shop.

Here are the singles I was most happy with: 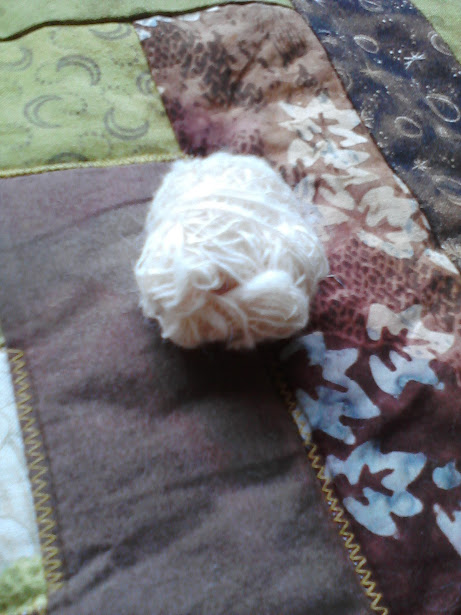 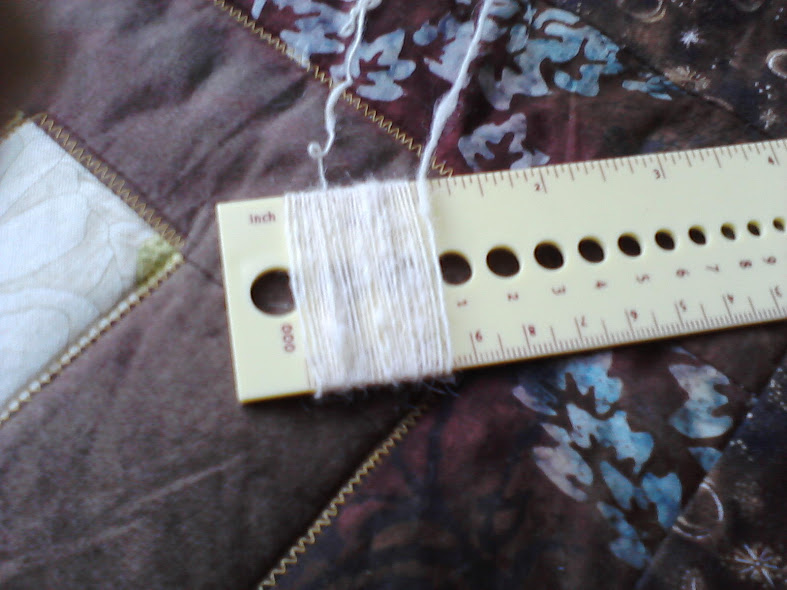 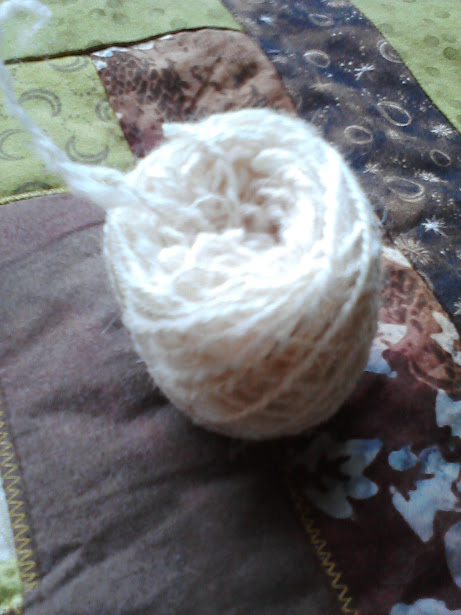 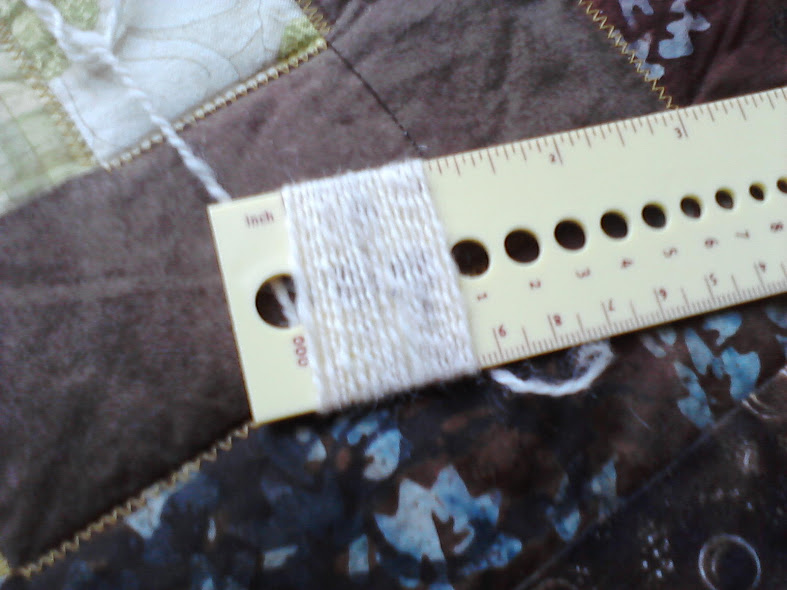 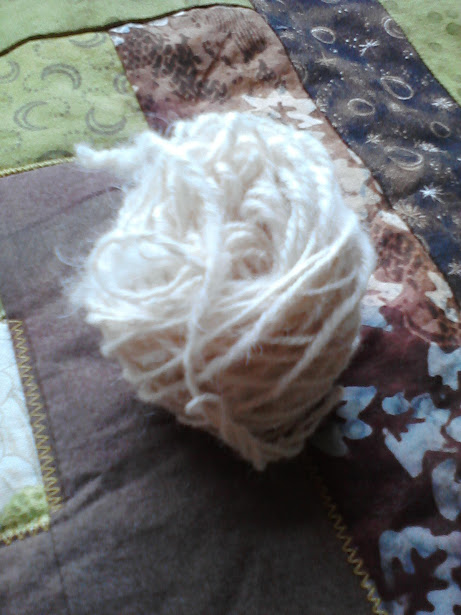 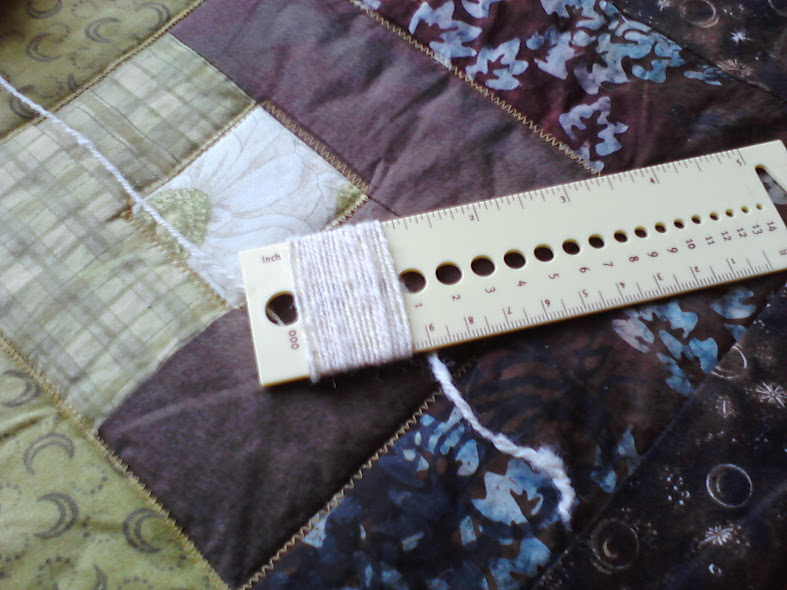 And finally, feeling adventurous, a cable-plied yarn of four strands: 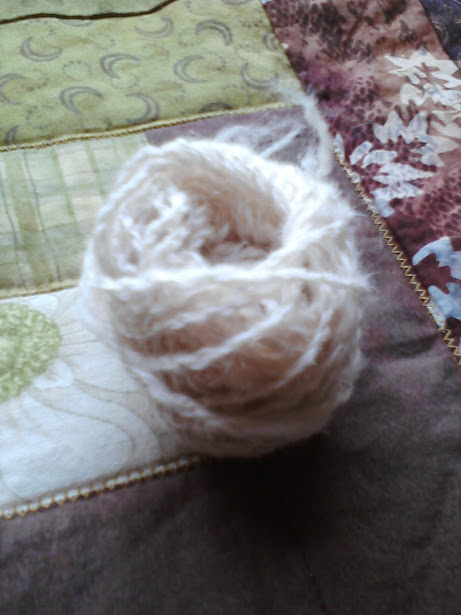 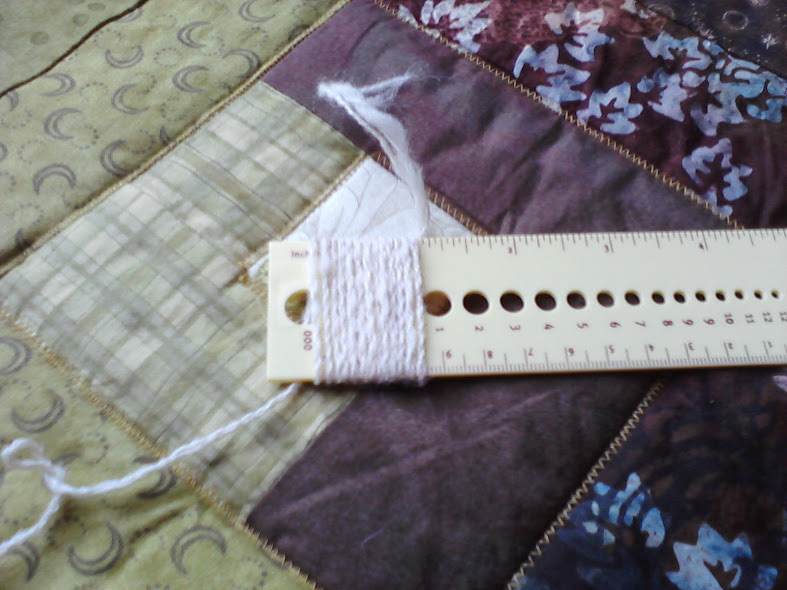 Only because I am a fool, my favorite sample was the cable-ply. It was the right thickness out of those soft, easy singles, and I was intrigued by the unusual texture of the cable structure.

Yes, I committed myself in that moment to spinning 1000 yards of 4-ply DK.

I found out I was pregnant with Naomi a week later.

I was already phasing out of dyeing, and being pregnant again, I was terrified of doing anything with chemicals. But, my mom was getting more and more into dyeing, and I felt clear enough on what I wanted that I could ask her to execute my dye plan for me. I carefully braided the big bag of roving into 4-oz braids, and gave my mom instructions on what to do with four of them. Soon afterward, she returned to me with four of these: 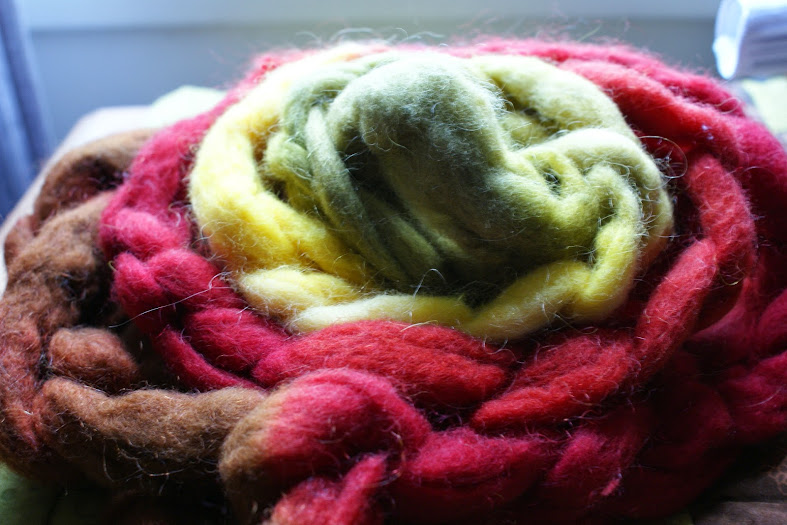 Just what I wanted: the transition of leaves through fall into winter, from green through red into brown.

No less than twenty-eight months after spinning those first samples, I am now three quarters of the way finished spinning the singles. I got through the first two braids relatively fast (only a year for both of them together! So speedy!) and started the third at least year’s Erntefest. When at this year’s Erntefest I still had half the third braid left – meaning I had spun exactly two ounces of wool in a year – I knew I had to get serious. I finished that braid in another month. 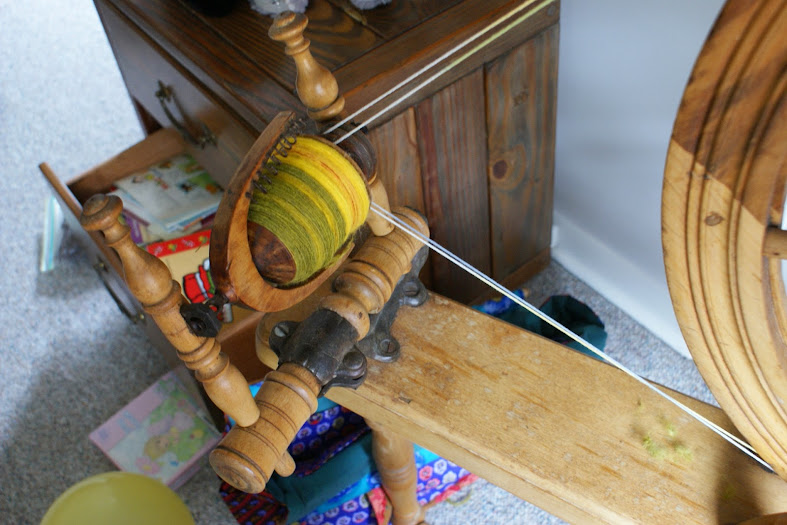 I now have three balls of singles, of various vintages. If they are consistent, it is only because I have been very faithful to spin in that instinctive sweet spot of “kinda thin.” Never mind that my instincts might have evolved over such a long span of time. 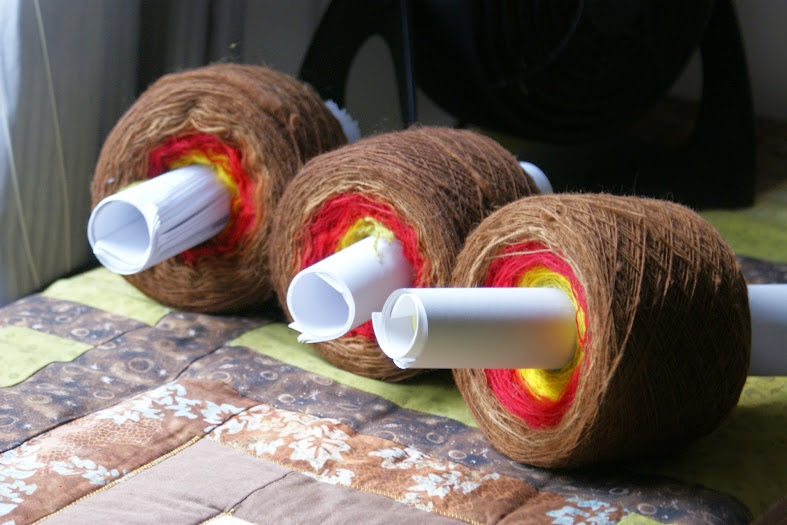 I am determined to finish this spinning project before my next baby shows up, because at that point I expect all major spinning projects to be out the window for a while. Not because I won’t take time to myself, but because I expect that time to be spent huddled in a corner knitting garter stitch and trying not to talk to myself.

The reason you haven’t heard about this project until now, is because at first I imagined having this grand post about the whole process from beginning to end. This Big Reveal. Now, I think that was probably just cover for being lazy.

Anyway, if I can make myself, I’d like to track a little more closely what it’s like to spin this last 4 oz. It’s quite a distinct experience, more emotionally than anything else, and after three goes, it feels pretty familiar.

A quick test has already started to show me why.

Using a postal scale, I divided up my last braid into four 1-oz strips. I just wanted to see how the color was spread out proportionately through the braid. 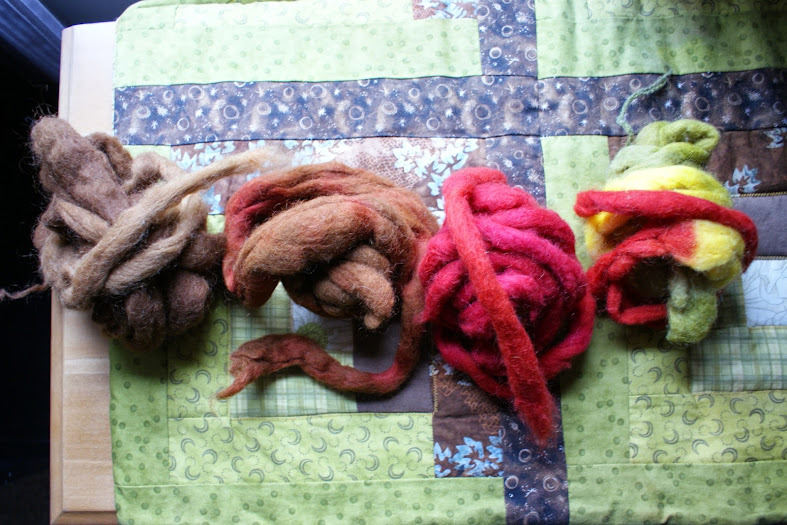 I knew there was a disproportionate amount of brown, but what surprised me is that almost the entire second ounce is given to the brown turning into red. So I’ve been spinning brown forever, sure that I must have made grand progress to start seeing red, since it must mean that pure red is just around the corner… when it turns out I have a whole ounce to go before I really start spinning only red. Oh and that green and yellow? No wonder they go so fast, there’s less than half an ounce of each! 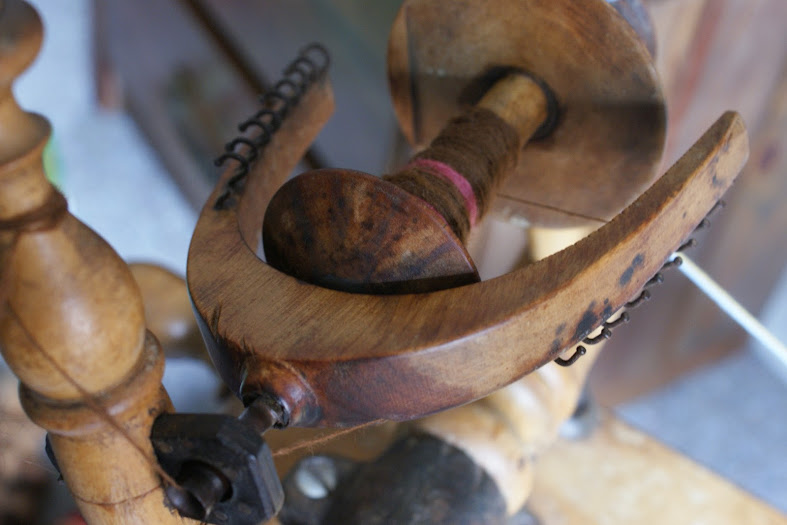 I started last week, hoping that, as has been my pattern, the excitement of starting a new braid would help me power through the Long Brown Bit. But the despair seems to have caught up to me already, as after a week I only have this much more.

I am going to finish this. I have let go of finishing a lot of things, and lots of stuff I am trying to hold in a more open hand… but this one… this one will not defeat me.

2 thoughts on “The Long Spin”