So way in the heck back in May, when school had just gotten out and I had a brief window of time and energy to try out all the projects and that had been brewing in my head all that busy semester, I started an experiment. I had been gluten-free since January 1, with pretty glorious success. I lost weight, I felt better, and eventually, I got pregnant. Win!

But for a variety of reasons, I don’t want to be gluten free forever if there’s a way I can avoid it.

One week late last winter, I had a bowl of Crispix for breakfast every morning, not realizing it had wheat in it (in the form of malt flavoring). After a week, my psoriasis started coming back very clearly, and when I stopped eating Crispix, it went right back away again. So apparently, I have a very handy litmus test on my palms.

(Though wouldn’t it be funny if, after all this, I was just sensitive malt flavoring?)

I made a plan to reintroduce gluten in the most controlled way possible, to rule out factors one by one.

The plan as it stood in May

I had determined, by mid-may, that I could have sprouted wheat. That means that almost anything in the “Nourishing Traditions” tradition is open to me – anything which involves soaking grains ahead of time. I started soaking our baked oatmeal for good measure, though I don’t go as far as soaking my rice or anything.

(Oh, and I also had a week of drinking conventional beer, which has gluten in it. I discovered that beer does not trigger my psoriasis. I also discovered that drinking a beer every night does not make me feel good.)

I was ready for the next stage: sourdough. That’s what I executed in late May and never got around to telling you about: traditional whole wheat sourdough bread, with organic non-irradiated wheat.

By “traditional sourdough,” I mean very traditional: like without added yeast, just starter. This means the dough still ends up soaking overnight, so it’s not really a departure from the soaking party. It’s certainly not a departure from NT itself, as the base recipe I used for making sourdough came right out of the Sally Fallon Bible itself. Here’s a little before-and-after rise for you:

My first batches were still very dense. More edible than the rustic sprouted breads I had been making, but you wouldn’t make a sandwich out of it.

This is attributable to my using entirely red spring wheat, to the lack of yeast, to my own inexperience, to my oven (I need to just go buy an oven thermometer), and to NT’s bizarre cooking times.

But I had room to experiment. Most of all, because for graduation, my mom got me a wheat grinder. Yay and hooray and huzzah! 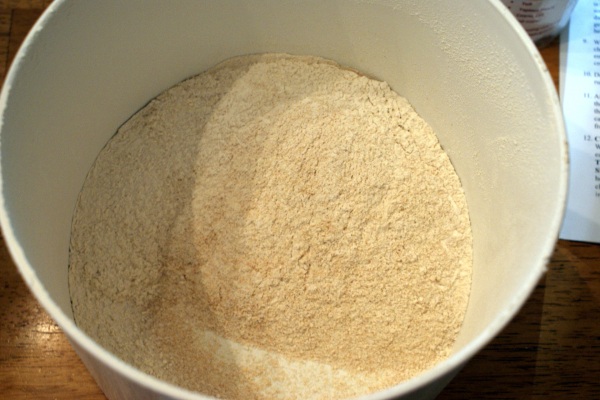 I am always very slow to adopt new appliances – especially bulky and expensive ones – but this was a major door opened. I no longer had to choose between super-expensive hard-to-source flour and grinding my own flour by hand in our coffee grinder. (That was horrible.) I could make bread. It was a pretty normal process. I could bring a loaf to a party to share without being precious about it. I may not have wanted to eat two pieces at a time, but it was (and is) great just toasted with PB&J, or baked with cheese on top, or with soup, or as breadcrumbs. And checking off sourdough opened the world of sourdough recipes to me: sourdough pancakes! Sourdough english muffins! Anything made with starter was available, I just had to make it myself!

Then I got pregnant. Seeing as a big part of the point of going GF was to stabilize my progesterone levels, with the hope of keeping a pregnancy without taking progesterone, you can understand why I stopped introducing new things.

So now, with a grinder and some time on my hands, I could play around a little bit. I started getting organic non-IR wheat in bulk, from a farm not too far away. I tried different varieties of wheat, and found that a lower-protein wheat berry like soft winter white, when it made up all or part of the flour, improved the bread dramatically.

Still, I felt really limited. Having to let the dough rise overnight meant that I really had to make the dough after Naomi went to bed, and by that time, I was often way too exhausted to think about kneading for fifteen minutes. The bread wasn’t fabulous or easy enough to motivate me to make it more than once every few weeks. (Though I have made a lot of sourdough pancakes.)

But now I’m well past the safety mark, hormone-wise, in this pregnancy (or at least past the point that I had to keep taking progesterone supplements for Naomi). So I’m feeling like I have a little wiggle room. I don’t know if my psoriasis will still be an indicator, as I didn’t get that until after Naomi was born, and who knows what effects pregnancy hormones have on relatively small gluten sensitivity issues like mine? So I’m not going to go crazy.

I have options for where to go next. I have the grinder, so I’m going to stick with organic non-IR wheat for now, although I would like to introduce conventional flour at a later date (when not pregnant). But I could try a normal yeast bread, like my mom used to make. I could try sourdough with yeast. I could try a low- or no-knead bread.

Because hey, if I can have all those things… I can, like, make normal pizza dough. Sweet rolls. I can eat at fellow crunchy-mom’s houses. I might even be able to eat an organic loaf of bread bought from the store!

Spam me with ideas. (Not literally. I get a lot of spam as it is.) I’ll keep you posted.