The week before Thanksgiving marked the receipt of our last regular CSA box from Penn’s Corner. Now it’s almost halfway through December, and I’m still catching up with food from before Halloween! So go the holidays. Forgive me for not remembering much of what happened to earlier foods; to spare you a lot of “I think”s and “probably”s I’m just going to lie and pretend I’m sure. If you want to skip the details and just read my reflections on the experience, scroll to the bottom.

October 22nd (Week #28): I’m not sure what made this week so busy that I cooked nothing and took no pictures. Probably I was stressing about something that I have since gotten over or repressed. 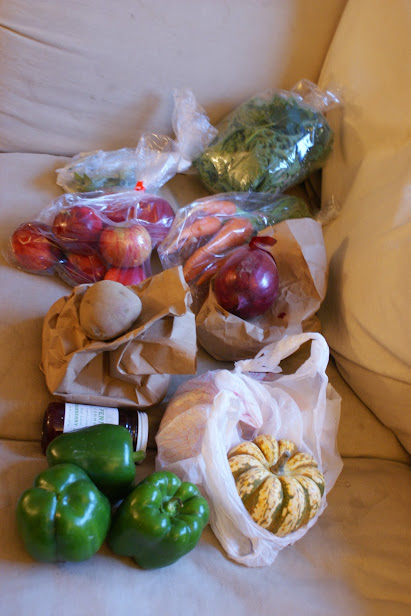 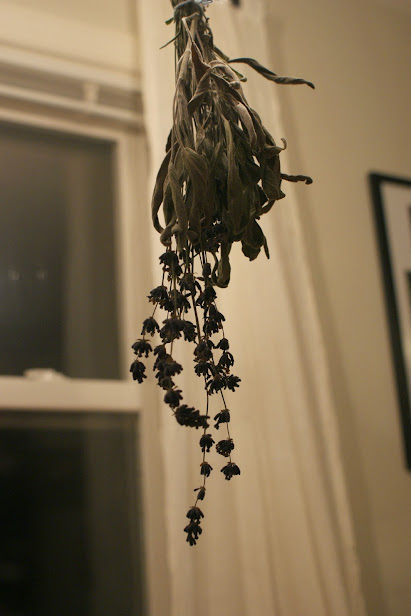 I was determined that this pretty batch of sage wouldn’t go to waste. I found a bunch of recipes with fresh sage, I thought about making sage butter. But time and occasion just didn’t materialize; larger things needed to be used up in main dishes. So one day, while out on a walk, I “borrowed” a few springs of lavender from a friend’s front yard who had just moved away (figured you wouldn’t miss it, Lauren! At least not anymore than you were missing it already, sorry), and strung it up with the sage from the kitchen light. It didn’t smell like much, but it was pretty, and felt very Pinterest-y. Even when hanging over my perpetually-cluttered kitchen table. Now that it’s dried out, I’m going to have to move it before the next Advent candle sets it on fire.

October 29th (Week #29): Halloween week! Including trick or treating for our silly fairy, and a party at our next-door-neighbor’s.

Made this salad almost exactly, with the cheese thrown on top. (There are radishes in there too, though I think from the previous month.) I even went out and bought an avocado and an orange for it, which felt horribly extravagant in late October.

Now for the Cauliflower of Magnificence.

This recipe had been making the rounds on Pinterest a few months prior. I wasn’t too moved by it, figuring it was one of those things that looked easy but was either not at all easy, or just poorly explained. I am suspicious of Pinterest spectacles.

But when weeks went by, and I still hadn’t worked out what I was going to do with this big cauliflower, I found the recipe again. It looked like a pretty hardcore Indian recipe, and I wasn’t sure I’d be up for making it. But I love Indian food, and I have a lot of obscure Indian spices around from when an Indian friend moved to Mauritius to become a missionary (the sorts of things that happen in a seminary community). When potty training week rolled around, and I was starting to get a little twitchy from staying at home watching my pantsless toddler for days upon days, I decided we would do it. It was about the only thing we did all day, but we did it.

Ginger and a red onion from the store, CSA garlic and tomatoes. (I knew very well these would be the last tomatoes of the year, so I was determined to use them too. Another point in favor of this recipe.)

So this recipe is out of this world. You start by boiling the cauliflower with a few spices, and just that was incredible. Next time I get a cauliflower I’m just going to do that to it; no big deal.

This picture was taken after the cauliflower had been cooked and cooled, and we were starting on the sauce. Immediately after taking it, I realized her hand was WAY too close to that stove, so I moved her over next to the cool pyrex of cauliflower. Which she immediately started shoveling into her mouth. I may have joined her.

But the sauce, man. The sauce took this from a side dish to a whole meal. It was everything curry and wonderful. I de-veganized the recipe slightly, and ommitted the chopped cashews. But had I left in the cashews, and maybe served with some quinoa or rice, it could have been an entree for three days. It was a lot of trouble with all the steps, too much work for a side dish, but not for a whole meal.

Clearly I need more cauliflower. Alas for the wait until summer comes again!

November 5th (Week #30): Potty training week. Little miss in a dress and nothing else, house at 75 degrees. It was a long week. There was definitely some comfort eating. 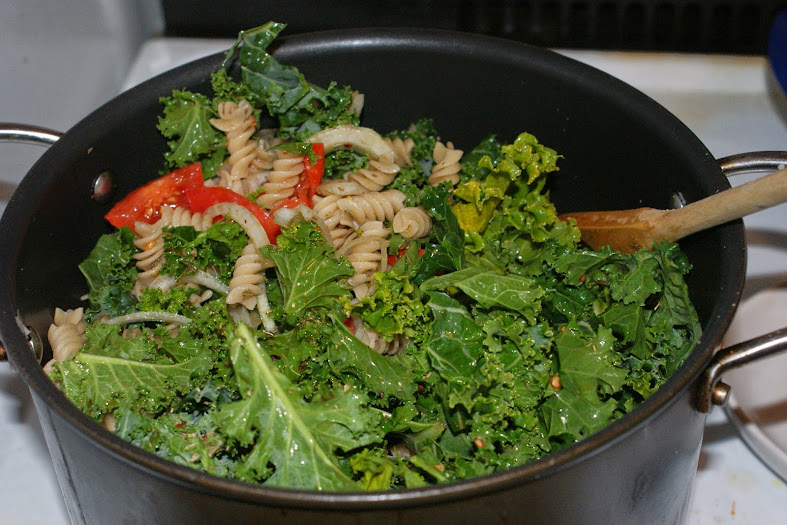 Pinterest photos are ridiculous, and this is my parody of one. I though those one-pot pasta dishes sounded way too good to be true, but when a friend said he’d made this one and liked it, I decided to try. I had some of the garden’s last tomatoes to use up, plenty of basil and onions and garlic, and what the heck – I’d throw in some kale. A lot of kale, actually. And it was scrumptious. Wouldn’t have been hurt by some chicken or a white sauce, but this way was probably healthier. 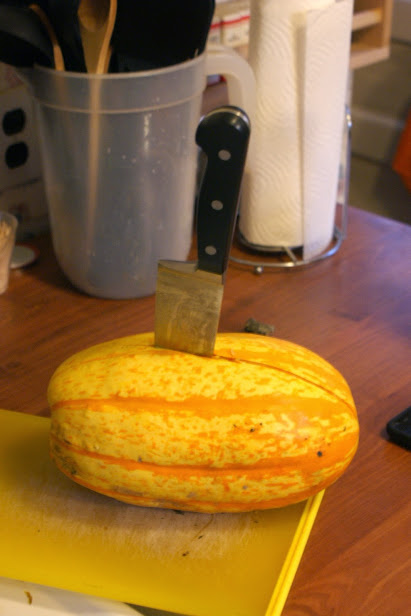 Oh, spaghetti squash! I was so ready to love you. I had this recipe just waiting in the wings, and when I got leeks the following week, it was clearly destiny. I carved out your innards one quiet afternoon naptime, while listening placidly to an audiobook about locavorism. I even took the time to clean off your seeds to make my favorite spicy roasted seed recipe.

Our relationship was destroyed not by your deficiency, by my not knowing at all what I was doing. I somehow expected that, if I roasted you enough, your strands would just fall apart into happy spaghetti-like form. I kept trying to pull the strands out horizontally, and they kept breaking. Finally I just tried cutting off the skin and breaking the flesh into pieces, and I had a real mess on my hands.

Belatedly, I fled to facebook for help. I realized I had been barking up the wrong tree when a friend said, “You formed the strands with a fork, right?” Um… formed? You mean the spaghetti-ness doesn’t just happen?

It took about half an hour of scraping little pieces with a fork to rescue some semblance of fake pasta. The final dish, with leeks and kale (instead of spinach, of course), was kind of strange, and I rescued the leftovers with generous helpings of gluten-free bechamel sauce.

This is the wordiest week, I promise. 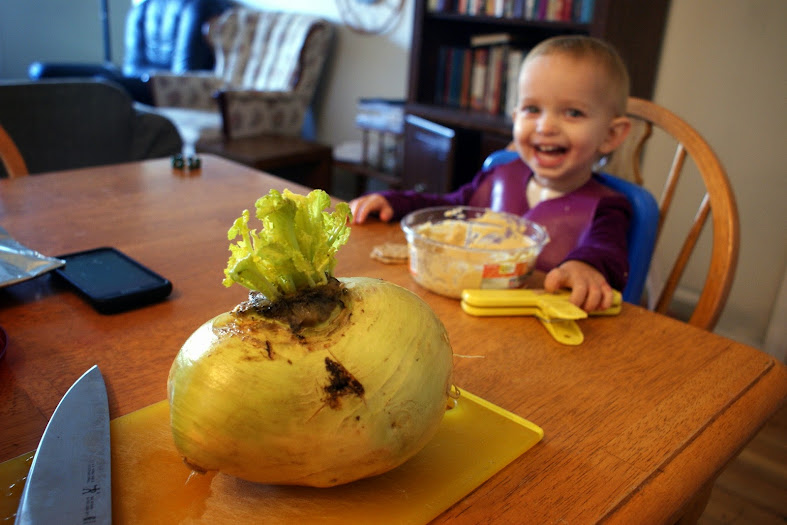 Okay, so is this turnip not hilarious? Naomi thinks so. Diced, it was no less than five cups. Five cups! I didn’t look very hard at my recipe before I started chopping, and I had thrown in a few potatoes for good measure, before I saw that I only needed two cups. Still hilarious! Kinda!

Feeling clever, I scooped most of the turnip out of the crockpot and put it in a pyrex with some olive oil and herbs. It had been morning prep for a crockpot meal, so I had plenty of time to roast these up in the oven, add some cheese and eggs over easy, and feel we were having a very hearty lunch.

Naomi would have nothing to do with the turnip. Which is funny, because that night when she tried the stew, the turnip was the only thing she would eat in the stew. I’d make some knowing comment about toddlers, but it did taste very turnip-y when roasted, while in stew it just tasted like… stew. 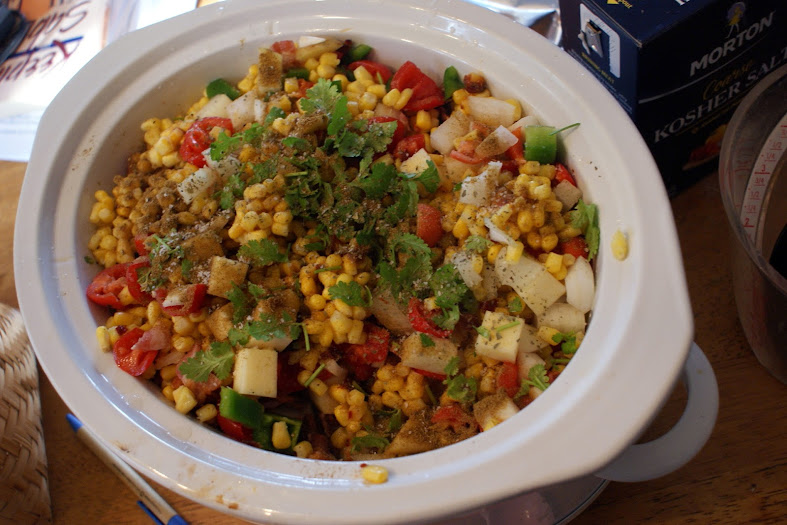 I, on the other hand, was less happy with the stew. Okay not stew, “Southwestern Corn and Potato Chowder,” but I feel like that fancy name is giving it more credit than it deserves. Never mind that it was probably weird because I altered the recipe too much, didn’t add enough extra cooking time for a doubled recipe in which I’d added too much frozen corn. Never mind that everyone else who ate it really like it. Never mind that my opinion is probably colored by the fact that I cooked it for a big small group gathering to which no one came because every single family got sick. Oh well. It was a blessing to one of the sick families, at least!

November 12th (Week #31): Jared traveled this week, which was an interesting challenge. The days were long, but it did mean I got the car and evenings to myself.

Did you know you can sneak kale into mac n’ cheese? You totally can. And I did, like this, but with a massively larger ratio of kale to everything else. Used GF pasta and made buttery toasted breadcrumbs from my sourdough.

This pan only lasted two days. And it got Naomi liking kale. She thinks all greens are kale now. I’m not about to correct her, when mistaken identity inspires her to reach for my salad greens and try earnestly to choke them down.

November 19th (Week #32): The final week! Received right before we left for our Turkey-Day-Vacation.

So now that it’s over, what do I think?

Having a CSA share, this time around, was an adventure, and a transformative one. I really fell in love with food, generally speaking, in a new way over this season. I learned how to pay much more attention to what’s in my fridge. I learned how to use Pinterest (if you haven’t noticed) to collect and organize ideas, since it is the perfect search engine for unusual ingredients and combinations, and special dietary requirements.

That said, it was a lot of work, and this was the first point in my life that I was both willing and able to make that kind of commitment. I’d understand if it isn’t for everyone, and there might be years that we choose not to: not because the food isn’t great, but because I know I won’t have time to do it justice. And this route is only economical if you would buy and use all this organic veg. That’s part of why it was such a growing experience: it forced me to buy and use the sorts of things – from the local sources and of the high quality – that I would normally only fantasize about getting. But the trouble is, once you have it, you gotta use it or lose it.

Would I do it again? Definitely. We decided to go for the winter share, even though there’ll be more value-added stuff and not quite as much straight veg. Partially because, its winter, and there’s no farmers’ market or garden to be a convenient alternative source for what’s still good when local. And hey, we’ve got a toddler and one car; convenience matters. But also, next summer we might be traveling a lot, so a CSA may well be out of the cards.

So we’ll enjoy a whole year of local produce, via the auspices of Penn’s Corner. I’m not going to keep doing these big detailed monthly posts (this one took me about three hours when I should be ruddy well be working on Christmas knitting), but I’m still collecting pictures of each box, which I may post at the end of the winter just to give you an idea of the sorts of things we got. I’m sure I’ll post random recipes when they go well, but I tend to do that on facebook more often than here.

I hope you enjoyed the ride, and that you got some ideas for what you’d like to make next year when things come back around! What about you? Do you CSA? How do you make it work for your lifestyle?