I hate to bring it up, but Christmas is in fourteen days. December is in the double digits, and things are getting serious.

Our Christmas responsibilities are pretty minimal this year. We aren’t doing cards; instead we’ll do a baby announcement/family update letter in April. We’re not bothering with a tree ’till Advent 4. And we aren’t a part of a cookie-baking tradition, and being mostly-gluten-free and no-sugar isn’t the best time to start. (Though I want to really badly. This baby wants sugar.)

But there is the knitting.

Because this thing happens to me. Every year I think “I’m not going to knit things for people this year.” But then around this time, I start thinking, “but I could make something simple for the ladies in the family,” or “so and so would really like a little this and that handmade,” or “Naomi really needs something handknit,” or “I knit Jared something every year; it’d be a pity to stop now…” And then it’s two weeks before Christmas and I am losing my mind, pulling all nighters, and generally getting caught up in the madness.

(Maybe I am a little attached to the madness.)

Anyway, this year I decided to be more proactive. With plenty of time to spare, I charted out everyone I could make gifts for, for whom it would be meaningful, I prioritized them by time and importance, I acquired patterns, and I found stash yarn and needles for each project.

And I showed you this picture. 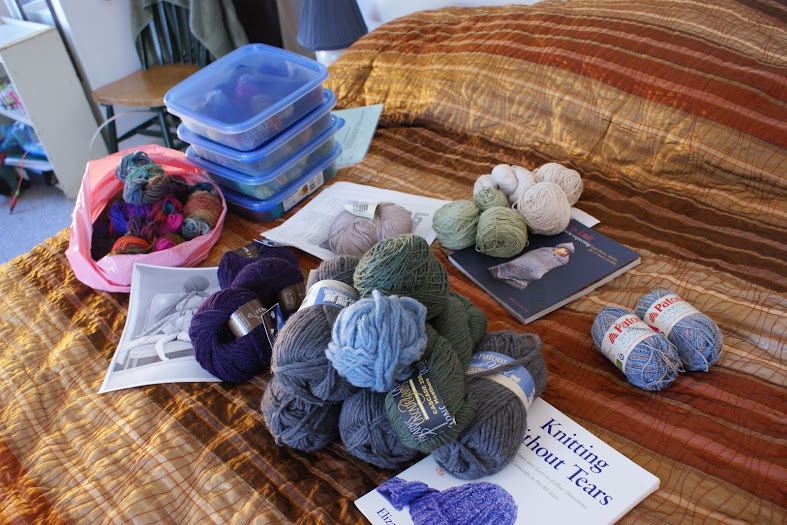 The picture is a little deceptive, since one thing doesn’t really need to be done for Christmas, one thing was a placeholder to be sneaky, something else is a placeholder because I hadn’t quite picked a yarn yet, and I really don’t think I’ll need that entire pile of grey yarn near the front. But it’s more or less representative of what I wanted to get knit: Six patterns, technically twelve projects, in a total of in what was at that time about six weeks.

Now I have two weeks left, and only one thing is crossed off the list.

That thing was the highest priority and the biggest time investment, so I focused and cranked it out with a month to spare.

Four of the remaining projects are cast on. I have one in my office, one in the TV room, and one in the living room, so I can get a few rows in whenever Naomi decides to entertain herself for a few minutes. Plus one I’m hiding from Naomi, that I sneak in during naptime.

Some people might be getting a box with some yarn and needles in it. Or a book.

How’s your holiday prep going? Or if you don’t want to talk about it, I get that too…