Here I give you stage 1 of the Gluten Reintroduction Experiment. The Grand Plan: make a loaf of bread a week, and eat a slice or two a day. Start with the most allegedly easy-to-digest options, then work my way back to commercial whole wheat bread, seeing if symptoms recur at any point. (For me, it’s psoriasis.)

Please note, this isn’t a recipe… this is documentation of an experiment! I’ll give you some references if you want to do your own research, but I am a first-timer, sharing my mistakes and my ignorance as much as my experience. Because I am incurably curious, and I suspect you might be too.

Why Farro? Farro is an ancient grain. We do not actually have any GMO wheat on the market, but the wheat we do have is mutanogenic, which might be worse. (Honestly, I think GMOs are probably fine, but that is another conversation.) The point is to isolate possible variables, and ancient vs. modern wheat is one.

Now, I can’t vouch for the sourcing of this grain; I got it from the bulk bins at Market District, which means it is subject to all kinds of cross-contamination. Also, I realized after the fact that this is pearled farro. That means that this is not strictly as whole a grain as if it were hulled, but oh well. They still sprouted.

I did a lot of googling on sprouting techniques; the ones I followed were here, here, and here. That first one had some recipes for what to do with sprouted grain or soaked flour.

I soaked these guys just in a bowl on my counter, covered with two inches of water, for 24 hours. Then I dumped the lot into a nice fine-mesh colander, and let it live in the sink, rinsing and stirring gently by hand three times a day. The grains seemed incredibly soft and fragile; I’m guessing that with part of the hard outer layer removed, they were not as, well… hardy. Still, after two and a half days, they had tiny little sprouts pricing out from the end of nearly all the grains. Can you see them?

In order to be milled into flour, the grains then had to be dehydrated. So I spread them on cookie sheets, put the oven on warm, and left them for about nine hours.

My oven doesn’t tell me how warm “warm” is, but I had read that most ovens put this around 170 degrees – a little too warm for just dehydrating. So I opened the oven for a few seconds every half an hour. I have no idea if it made any difference. It did definitely seem like the grains were drying faster than I’d read they should, so they probably cooked or toasted a good bit.

This is what they looked like after a few hours; I scraped them together and spread them back out to mix them up, as they were sticking to the sheet.

At the end of nine hours, I had just under three cups of sprouted, dehydrated (and probably toasted) grains.

The next step, definitely the most annoying of all, was grinding the stuff. This is an experiment, not something I know I’ll be doing every week for the rest of my life, so I am not willing to sink hundreds of dollars into new equipment into this venture – it had to be done with stuff we already had. So I cleaned our little hand-crank coffee grinder and re-set it to the finest setting.

What seemed like hours later, I had all the grain ground into something that I hoped was flour. It looked a little chunky to me yet. I had no idea how to tell the difference between flour and not-flour! Would grinding it all over again help? I set the grinder even finer, and put a little through. It took even longer than grinding the grains had, and was distressingly effective.

Mercifully, I realized that I do have a good tool for determining the flour-ness of flour: a sifter. I put all my flour through the sifter, and the chunky stuff that stayed on top, I put back through the grinder. Thus, at the end of three quarters of forever, I had about 2.5 cups of what could definitely pass for bread flour.

Now, 2.5 cups isn’t very much. I eyeballed about 2 cups of grains at the store, thinking “oh, I’ll only be making one loaf, so I won’t need much.” Without pausing to consider the relationship between the amount of flour required for “one loaf” and my imprecise conception of “not much.” The recipe I used called for 4 cups, most of which was bread flour. I knew vaguely that whole wheat flour required more liquid than white flour, and that sprouted flour required more liquid than regular whole wheat flour, so I rashly dumped the amount of liquid for a whole loaf into my unsuspecting bowl of flour. Thus, I was left with the wettest bowl of bread flour I’ve ever seen staring up at me from under saran wrap.

My first taste of gluten after over four months was licking my fingers.

But God smiled down on my little loaf and had mercy.

I used a recipe that I cannot now find online; Jared got it in an email from some earthy restaurant in Dayton whose updates he subscribed to forever ago. We hung onto the printout for years, because it makes a rustic, no-knead, almost fool-proof loaf of artisan bread. Basically, you mix flour, yeast, warm water, and honey together, leave them over night, then make it into a ball, let it rise again, and bake it.

This stuff sure didn’t seem to rise much, at either stage. The recipe called for it to be baked in a stockpot; I baked mine in my smallest saucepan instead. It was with much trepidation that I put that pot in the oven.

(That white stuff on top is a little bit of all-purpose GF flour. I had completely forgotten to save a little flour for sprinkling on top. The GF flour was singularly ineffective for this.)

Imagine my surprise when the bread came out really, really yummy. It’s dense, but still soft after several days of careful storage. It’s dark, and chewy, and ridiculously flavorful, and has that springiness and cohesion that only gluten (or a lot of butter) can provide. After all my guessing and mishaps and improper equipment, I’m thrilled to have something not just edible, but delicious. Though this also means I am unlikely to get more careful.

I’ve been having a couple little slices each day with my friend Anne’s cultured butter, and so far no outbreaks (though it’s only been a few days). My success has the next experiment soaking already. 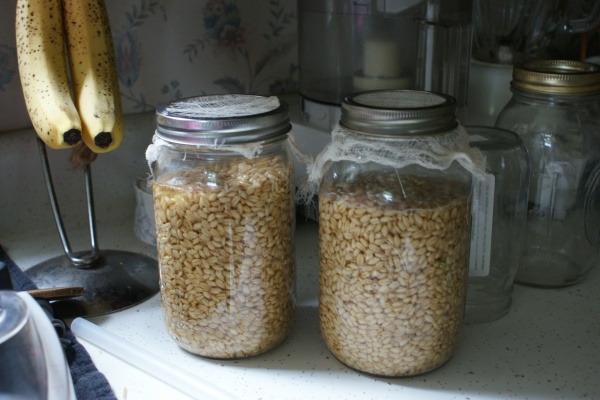 My friends who are actually bakers – I welcome your input! My knowledge of the science behind the many-faceted process of bread-making is gappy and hazy at best. Did I cook the grains? Would that make any difference? What do you think about these no-knead recipes?

2 thoughts on “Sprouting Experiment the First”