I might not be a farmer. Not quite. One farmer I read recently said that if you have dirt you are responsible for, you are a farmer. In which case, my three pots of peas on the back porch are my membership card in the farmers’ club. But in the meantime, joining a CSA might be the most effective way to participate in my food production.

Without a doubt, the most difficult thing about being in a CSA is making sure you don’t waste anything. When I worked for a share at Breezy Willow back in the day, there was not a week in the summer that something wasn’t getting raunchy in the fridge. Making sure you use what you have takes planning, intentionality, and regular observation.

Jared and I joined Penn’s Corner, which started mid-April with its early-bird program. To help me use as much of it as I can, I am recording every share by camera, and using Pinterest to collect recipes when I find out a few days in advance what’s coming. I’m sharing the results here, partly because food is fun, and partly because you might get some ideas for what to do with things you can find at the farmers’ market right now. And partly because you’ll get a glimpse of things getting real in my cluttered, beloved little kitchen. 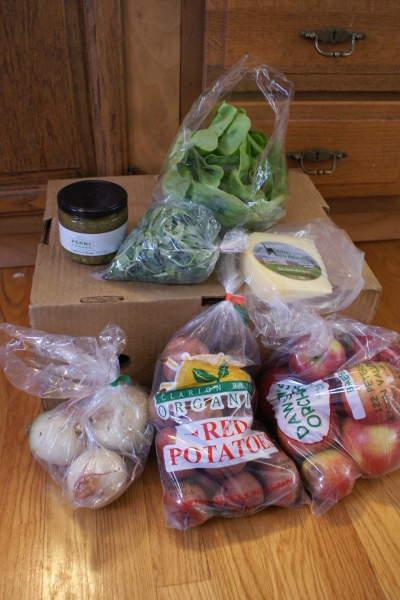 What are watermelon radishes,  you ask? They are like a regular radish, except huge, and turned inside out. And gorgeous.

Radishes are a little much for me in a salad; I was tasting them for two days afterwards. But roasting them into little chips was easy and quick, and they were so sweet and delicious. (This may have been the second time I successfully used our mandolin slicer. Jury is still out on whether it is earning its shelf footprint.) 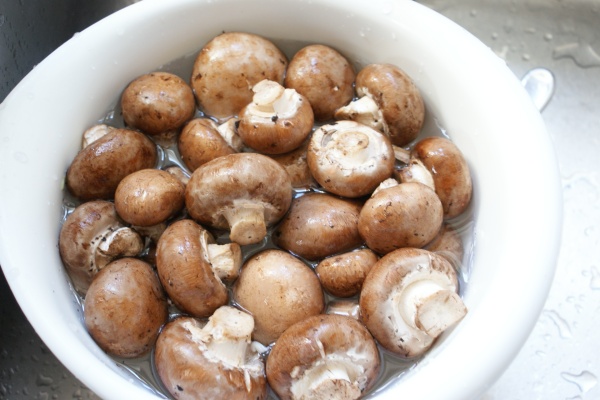 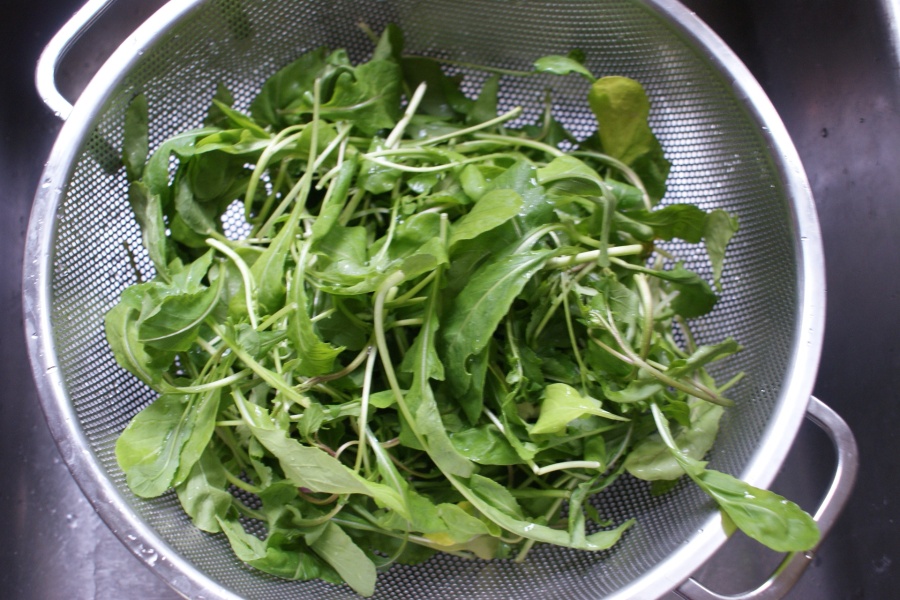 Arugula, a.k.a. “rocket,” ready to be de-stemmed and blenderized.

Ramps are like, the new scapes. Which were the new truffles. You know, that hard-to-find gourmet spring food that fancy restaurants and foodie blogs start going on about, and now they’re overharvested. We actually found a big patch of them in a local park last weekend, deep in a streambed on a rarely-used path. (We didn’t pick any, since we knew we were getting some, and picking them in a park is kinda illegal and unethical. Still, tempting.)

Penn’s corner has done due diligence on harvesting sustainably, so these are guilt-free, extra-smug ramps. I tried a couple of them straight, and they tasted like a mild, garlic-y chive. (I guess they are like leeks? I love leeks, but I am leek-inexperienced.) Gently sauteed, they are very sweet. We are getting another batch this week; I might do something with them raw.

OH and this crazy thing happened when I sauteed them! I did not cut them up at all, as the recipe directed. When they went into the pan, after they wilted a little, the leaves started to inflate like balloons! If you have ramps, do not cut them up if you want to see this weird little display.

So there you have it, CSA month #1! I aim for pretty pictures, but not too pretty – This is just a food diary of sorts, and is in no way glamorous. I’ve spent enough time envying other people’s blog lives to have no wish to excite that emotion here. (Some of you are saying, too late!) Life is occasionally delicious, but mostly it is just hard work. I am learning to enjoy that more and more. But what makes it enjoyable is just that it is my own, what I have been given, and I do best when I am present to what is actually in my life. That’s still harder than it should be, but we all go one day at a time. Do my chores, play with my baby, and eat good food.