Naomi will be twenty months old in a week. In two months, she’s gone from a handful of words to a storm of continual vocabulary expansion. As a casual linguist (having studied linguistics as part of my anthropology degree, and spending eight years of my life basically planning to be a linguist), this is a source of endless entertainment. So I will attempt here, for my own amusement, and I hope yours, a collection of observations at this initial stage of language learning. (My recollection of IPA is completely out the window, so I’ll be winging it with the terms of English primers. My apologies to any real linguists who might be reading this.) Here we go… 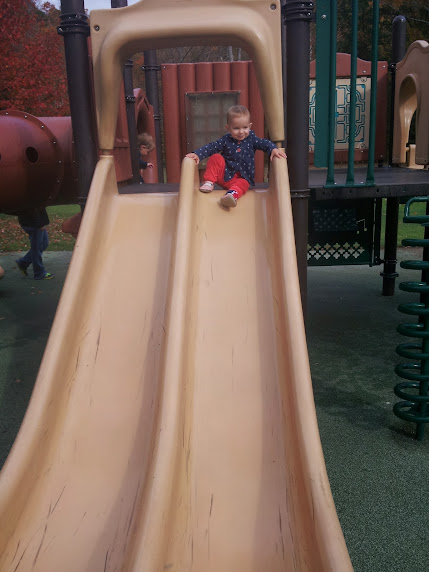 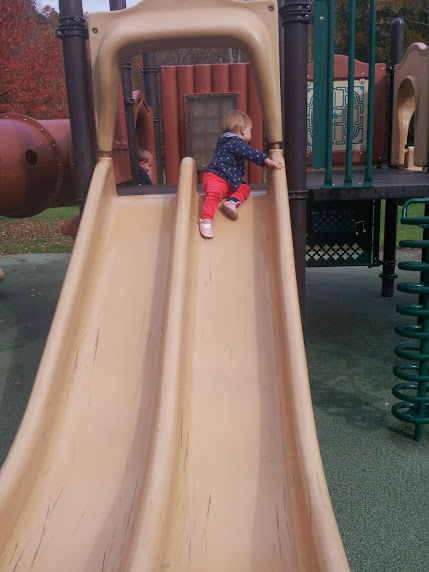 Amazingly – because she loves ABC books so much – she knows pretty much all her letters. This is pretty funny, because she can’t even make the sounds required to say some of the consonants, and vowels are a bit of a crap shoot.

She has real trouble with G and J. This kinda makes sense for the J sound, which I vaguely recall is actually a compound in IPA, but it’s weird to me that she can’t say G as in, like, goose. (Is a stereotypical baby saying “gagaga” just made up?) She usually changes G to a D. No dice with K either (she uses a T instead). Thus, she also says the letter Q as “tiu,” and X as “ets,” which is adorable. L and R are out, predictably; I don’t expect her to pallate those for a while, but she approximates.

That said, she has her share of consonantal morphemes that fall outside English letters, like ch. “Choochoo” was an early word, and means anything with wheels, from a car to a walker to a stroller to a semi truck! It makes it confusing when she asks for a “choochoo wide.”

She can certainly make most vowel sounds, though she sometimes applies them in ways I can’t always predict. She calls the color “white” “wheat”, not because she can’t say the “ai” dipthong, but maybe because she doesn’t quite do final consonants, and “whee” means swing. Final consonants aren’t all out though; she seems to have a glottal stop as a solid morpheme. She’ll also do a final S, sometimes a final TS, e.g. “watch” is “wats.”

Overall, though, it seems like the number of words she knows exceeds the possible combinations of the sounds she can make. I seriously thought about creating a vocabulary list, then decided that was going too far.

When we get to two-syllable words, things really get interesting. Because then I start to see not just what sounds she can make, but what rules she is learning, or making up, about putting them together.

Most of her two-syllable words are repeats of the same syllable twice, but there are plenty of exceptions. She’ll change the vowel between syllables most readily, like “wawo” (water). In most of the two-syllable words with different consonants, the second syllable is a soft one like H, S, W, or Y, e.g. “ap-hai” (up high). The rest of the time, she’ll just redouble a consonant… though not necessarily the first one. For instance, “doggie” is “daw-dee,” but “coffee” is “fawfee.” Then there’s the laziness of just replicating the vowels of a word she adopts, but replacing all the consonants with D or T. “tah-too” means a variety of things, including “crackers,” “vacuum,” and “chocolate.” I have to pay a lot of attention to context, and play the odd guessing game.

She’ll sometimes do this funny thing with words involving the W or M sound (or at least, words for which she uses the W sound), adding an extra reduplication to the end. For instance, the sound a cat makes was “meow-me” for the longest time, and my sister Leah is “we-ah-we.” Oatmeal is “ah-meah-me,” which is suspiciously similar to how she says her auntie Emily’s name. Puzzle that one out; is this baby pig latin? She says just “meow” now, though. Then there are fledgling attempts at other consonant combinations; like “bless” is sort of “behls,” trying to say that S with her tongue sticking out.

She’s started to put words together, every now and again. Usually it’s just a noun modified by a color adjective. Her parents’ favorite is “pah-poo moo,” referring to the carton of half and half, which has a purple cow on it. She has some sense of possession, or at least association of objects with one of us. For example, when Jared’s at work, I’ll sometimes wear his down booties around the house, which makes Nomes happy for some reason. So she’ll drag them to me saying “dada boo’s!” Then there’s the ambiguous but frequent “choochoo wide?” The closest she’s come to a sentence is “dada home!”

I am conscious of the fact that I am only able to be this attentive to her because she is my oldest. And that is also why I think she’s the smartest little thing in the world. I always thought parents’ gushing over their kids every ability was silly. But I think I just never had reason before to pay attention to how amazing kids are in general. How amazing the learning process is. To be involved so up-close. How can you not think any kid is amazing, when you have a chance to pour into them and love them and see them thrive?