In random baby news, Naomi is the stairmaster. She has mastered the stairs. 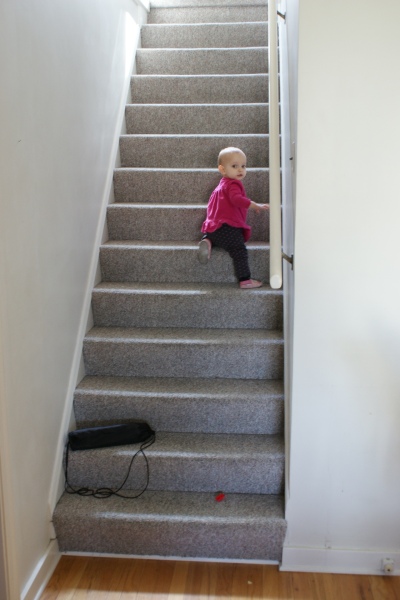 Still no solo walking, but she takes on these steps like a champ. Up and down and up and down, with me her decreasingly nervous spotter. Thankfully she is also learning to obey Mama’s “Stay downstairs, please!” But I let her go up as often as I can. Why? Because at the top of the steps is the only window low enough that she can look out from.

And who wouldn’t want to take in a view like this multiple times a day?

I just finished a lovely George MacDonald book called At the Back of the North Wind. In it, MacDonald describes the country which is at North Wind’s back, which I can only guess was part of the inspiration for Aslan’s country as Lewis describes it. Anyway, to get to my point, he hints that “it is always the month of May in that country.” That made a great deal of sense to me. I imagine a heaven perpetually in summer would get rather dull, but perpetually at the joyful moment when spring finally catches hold? That I could deal with.

The tide has turned. That moment has come when life is not just peeking out from under snow; it is alive, with a vengeance! I am out multiple times a week and have no hope of keeping up with the weeds. Heirloom tomato seeds germinated yesterday and are already two inches tall. The snow-white blossoms in the picture above are already replaced with leaves.

None of this has very much to do with the Lord of the Rings, but this next LotR knitting project certainly fits with that sentiment. As it is leaves. Just leaves. Lots of leaves.

The “Legolas Kerchief” was cast on during the first Saturday night that was warm enough to spend on our porch. Within a week, the mostly-triangular piece was nearly full-sized.

I was a long way from finished, though, as I still had the rather tedious “ties” to complete, not to mention the epic weaving in of ends that is required when each tip is worked as a separate piece. Good gracious, that was annoying. But it did carry the pattern through logically, and made blocking very easy.

Yarn review: I used a now-discontinued wool/cashmere/nylon blend from Sublime yarns. It is one of those freakishly-bouncy yarns with a gazillion plies that were popular with big yarn companies a few years ago. They probably still are; I wouldn’t know, as I can very rarely afford their high price tag. But they are worth the money, if you have a few hundred bucks to throw around on a big project. So “sprongy,” as a former boss liked to say, with the crispest stitch definition you could ask for.

Unlike most lace patterns, Legolas is not symmetrical; instead, the two sides are identical. This leant a rather goofy squiggle to the center line, contributing to the overall organic feel. Also organic were the little points, which in no way stayed flat after blocking. I don’t mind, though. It makes me feel like I’m wearing a piece of spanish moss.

I think the ties made sense. The piece is a little too big to wear as a kerchief on the head (though that may be my fault; I never swatched and still don’t know if I got gauge), but it is small for a shawlette. That means it is helpful to be able to tie the ties in a half-hitch behind my neck and let them hang in front. I can wear it nice and loose, not adding too much warmth at the neck as the days heat up. 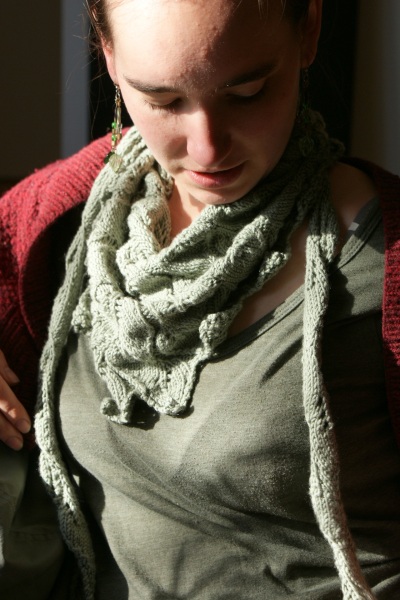 When Legolas (the character, not the scarf) strides into the Fellowship, it is into one of the longest chapters in the series: “The Council of Elrond.” That chapter a long read, but it is incredibly refreshing, because every single being present is a mature person of noble character. Unlike in the movie, the main tension does not come from racist bickering or suspicious nationalism. There is confusion among the members as the story of the ring is slowly expounded, and the frustrated pride of Boromir rears its head a few times. But the primary tension comes from without. It is clear as day that the enemy is in Mordor, and no one needs to be reminded to set aside pettiness or jealousy or suspicion in order to remember that.

I keep thinking about character these days. What its base ingredients are, and how they are built bit by bit in the spirit. I am no moral philosopher, but I am a parent. I don’t know what all the answers are, but it is part of my job to think about them. And I have a sneaking suspicion that it has something to do with enduring winter and enjoying spring.

Legolas had already seen over a thousand by the time he turns up in this tale. He is not the grumpy prince we meet in the second Hobbit movie, with a chip on his shoulder and the voice of a chain-smoker. The reason he turned up in Rivendell at all, in Fellowship, was to report that his people had made a fatal mistake, letting Gollum escape while trying to be kind to him! Try that sort of humility on for size.

All these themes connect in my heart, though I am not sure how to connect them with words. Perhaps this is enough: spending time with a person of deep virtue is not unlike being in the kingdom of heaven. It is perpetually as life-giving as May.

2 thoughts on “May Leaves Virtue”