A belated post this time; I’m afraid! After finishing Goldberry, I think it took me about five minutes to troop up to the Yarn Room, wind up new yarn, and cast on her mate: a hat named Bombadil.

I changed plans dramatically for this hat, at nearly the last minute. I had bought the yarn below specifically for this project – Ranco, a relatively cheap sock yarn by Araucania. It was blue, it was cheap, and it was on sale; that was enough for me at the time (I got the brown then too; it’s also Ranco. The yellow was a hand-me-down already balled up; I reskeined it, but no idea what it is). But as Goldberry was wrapping up, something didn’t seem quite right. I had a couple friends who made sweaters together out of Ranco that expanded beyond usability when they were blocked. (Since any fingering-weight sweater is a truly epic project, this was no small heartbreak.) I don’t know why I didn’t consider that when I bought this stuff, but I was thinking about it now. A hat is not a huge project, but Bombadil is no easy hat. And should it hit water, grow enormous, and lose its elasticity… well, I’ve had enough engineering disappointments so far already on this journey through Middle Earth!

When I realized that the brown and blue would be perfect for Helm’s Deep (a project in the Two Towers series), I decided I could let it go. This yarn would not be Bombadil. 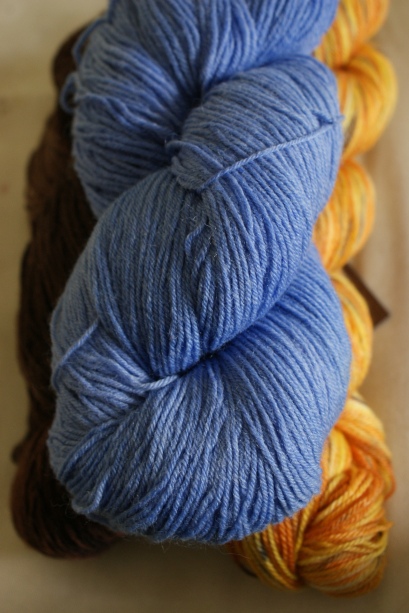 Surprise of surprises, the yarn that turned out to be perfect was a serendipitous impulse purchase when a sock yarn I’d been admiring ended up on the sale rack at Yarns Unlimited. It’s “Squishy” by Anzula, a Merino-Cashmere-Nylon blend with beautifully layered semisolid tones. I was confident this yarn would make a luxurious hat. I paired it up with the decadent leftovers from Allison’s Cowl and my Canadian Socks, and I was off to the races. (“Bright blue his jacket is, and his boots are yellow” is about the only line of Bombadil’s poem that I’ve always remembered. So those colors had to make it in, even if not as the main color.)

Seriously, I was so obsessed with knitting this hat that I barely remembered to take pictures before I blocked it.

The whole thing starts out with a quantity of deceptively simple ribbing, only to smack you over the head with a section of three-color fair isle. Generally I despise three-color fair isle; it is a huge pain in the neck, and I usually think a good designer should be able to engineer a way around it. But I can see how that was impossible for this little peerie pattern, and for goodness sake, there were only six rounds of it. It was actually kind of fun.

From insane fair-isle land, the body and crown of the hat completely switch gears into some extremely intricate traveling-twisted-stitch cables. There was almost no repetition in this bit; it was changing constantly and required my full attention. But goodness me, it was fun. And the crown shaping! We all know how I feel about crown shaping. There may have been some serious homework shirkage toward the end there. Thank goodness it was just a hat. 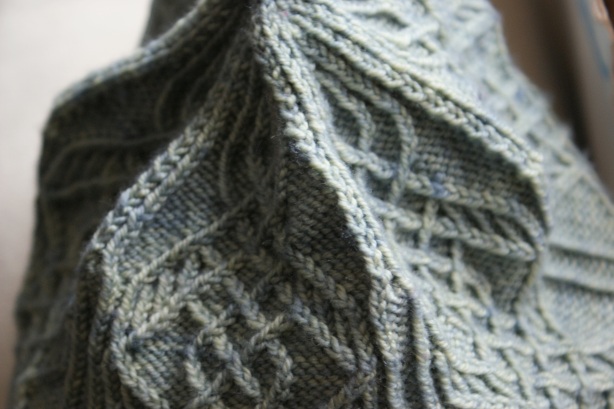 The stylistic whiplash left me feeling more bewildered than a hobbit who leaves the incomparable comfort of Bombadil’s house to find himself lost in the Barrow-Downs. But much less distraught. I didn’t get into any scrapes that required me to sing for my rescuer. No, I was happier than Pippin with a whole pint of ale at the Prancing Pony.

Okay, the metaphor got a little thick there. Sorry. I blame sleep depravation. (My child is going through some sleep adjustments;  I haven’t slept past 5:30 in three weeks.)

I blocked Bombadil over a big plate, in my new favorite hat-blocking spot. Naomi’s two walkers live right in front of a heating vent, and wouldn’t you know it, a walker also makes a great hat-stand. I’ve been blocking all my little things here, as they dry in the space of a nap!

I cannot get over this crown. Here’s another shot. Perhaps evoking how all roads in the Old Forest lead to the Withywindle?

I conclude with a couple of bad selfies. Here I make it look like a maid’s cap, but it really is shaped more like a proper tam-o-shanter than a slouch hat. 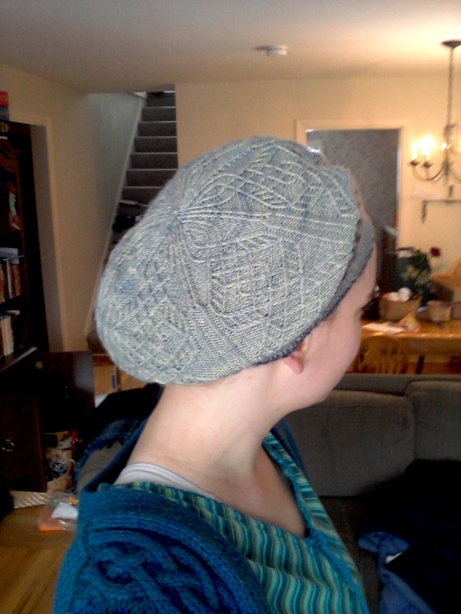 The hat’s recipient will be able to pull of a proper tam-o-shanter look much better than I, as she is actually of Scotch heritage. Yes, this went immediately to M’s collection. If for no other reason than that she is about the only person I personally know, of whom I can honestly say…

I think if she and Tom Bombadil met in the woods, they would understand each other. She doesn’t quite talk in stress-time meter, but… almost. Spirits of Jove, both of them.

Singing prayers for you, Martha.

One thought on “A Merry Fellow”