It’s nearly three in the morning, and sleep eludes the pregnant lady who had a three-hour nap this afternoon. I’m sitting on the couch with swollen feet propped up, and a bag of frozen corn balanced on my belly. The corn is supposed to help baby flip to a head-down position by getting her to move her head away from the uncomfortable cold. She certainly doesn’t seem to like it, but she’s taking it out by kicking my nether regions rather than flipping. Oh well; at the last the chill will sooth my weirdly sore top-belly, which feels almost bruised from all her attempts to push her head up into my lungs.

Those same wee feet, which I’d much rather have kicking my ribs than my cervix at this moment, are now going to be a little bit warmer when they become visible to the outside world.

Last week was a little crazy pants. Jared was gone all week to have a retreat in the woods. He’ll tell you about that in his own time, I think. In the meantime, I was back at home having almost the opposite of a retreat: I was in class from 8:30-4:30 every day, learning about the Writings portions of the Old Testament. My days were full of listening and knitting, and my evenings were full of more knitting while I tried desperately to catch up on reading. At least, both ways, it meant lots of knitting time. 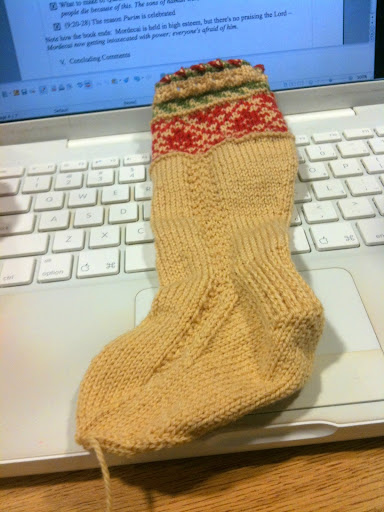 Aunt Kathy called it – my clever idea to go along with my self-imposed sock club is to take the leftovers from each month’s socks and make a matching pair for baby. Let’s all have a moment to share in a collective *squee!* (it is pretty squee-worthy, isn’t it?) The first pair of socks I had the idea to turn into leggings – perfect if we decide to do EC, and either way they make for a quick diaper change.

I have knit many, many pairs of socks in the last few years, and in the process I’ve become competently familiar with the relative shapes of human feet. But not baby feet, or baby legs, as it turns out. I was able to find a chart for baby shoe sizes, but there doesn’t seem to be a lot of clear information on the internet about baby thigh circumference. I did eventually get some info on that from other mothers, but by then I was done the first legging (above).

This poor first legging, out of ignorance, ended up with a leg sized for an infant and a foot sized for a 9-month old. As I saw it, I had three options for recovering it: 1) Remove the plain portion of the sock leg, reattaching to the foot it with some clever grafting, to make these normal ankle-length socks for a 9-month old. 2) Rip out the foot and make a smaller one, more fitting with the infant-sized leg. 3) Make an identical second sock, pray for a skinny-legged large-footed child, and decide she won’t care if she has baggy socks on her feet.

I ended up going with option 2, though not before making the entire second sock to test out the smaller foot. Here you see the original (right) and the smaller version (left). Thank goodness it doesn’t look as if I’m going to have a baby with different sized feet, so I ripped out the original’s foot and re-made it according to the second one. 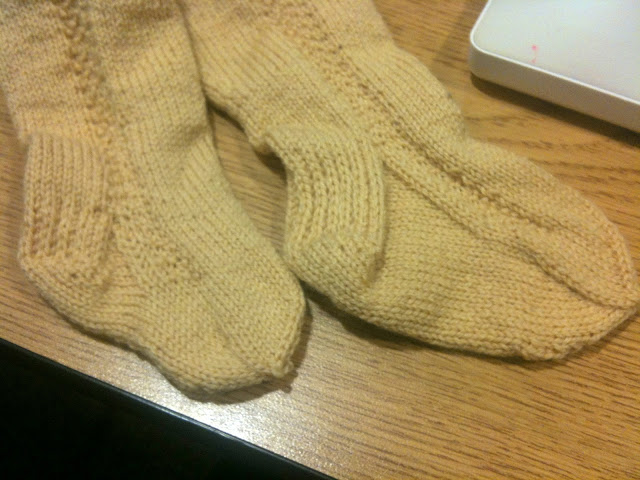 I made these, and knit the mate of the adult pair, in a week of class. I did the interesting bits while actually in lecture – the fair isle cuffs, heel turns, and gussets, mostly – and saved the fairly boring leg and foot sections for my evenings filled with reading. Thank goodness for owning two needles of the appropriate size for this venture. 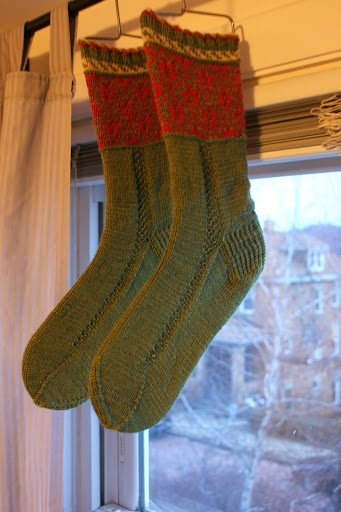 The pattern, called “Canada,” is the first in the sock book I’ve just started working through. I love the pattern description, which couldn’t have explained itself better if I’d made it up: “The technique for the ‘Latvian twist’ was taught to me by Lucy Neatby, a very skilled British knitter, designer, and teacher who lives in Nova Scotia, and the main pattern is an estonian design called ‘Maple Leaf.’ So many people have found refuge in this country, I like to think these socks reflect some of the diversity of cultures that are at home in Canada.” Knitting on the Road, by Nancy Bush (Interweave, 2001), p. 15. 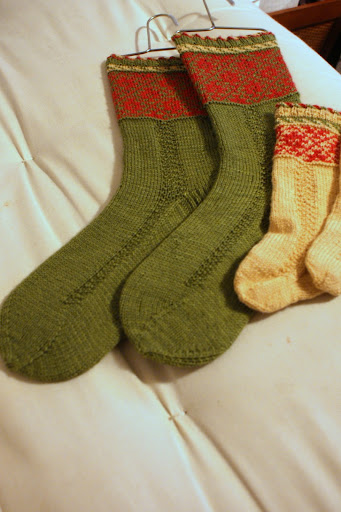 I made no changes in the adult pattern except the one I always do for round toes – I make one pair with SSKs and the other with K2togs so they are symmetrical. It’s a compulsion.

To adapt them into infant-sized baby leggings, I made the following changes (trying not to give up too much of the pattern here): 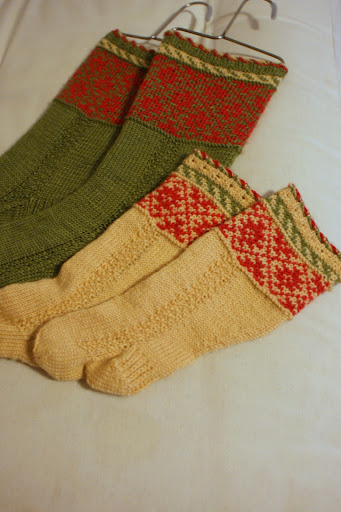 Yarn Review: Shelridge Farm‘s yarns are so soft, so beautifully hand-dyed, so appropriately Canadian, that I broke with my usual thrifty habits and bought the exact yarn called for in the pattern. For the rest of the year, I’ll knit my monthly socks from stash, but I’m starting with an indulgence. I picked it up at the Shelridge booth at the MD sheep and wool festival last spring, and at that point I knew I was fated to knit through a second Nancy Bush sock book. (Lord knows I can’t just knit one thing out of a book.) I deviated from the color scheme in the book only slightly, working with a more olive-y green and butter-y yellow. I don’t regret my lack of originality one bit. These socks are gorgeous. 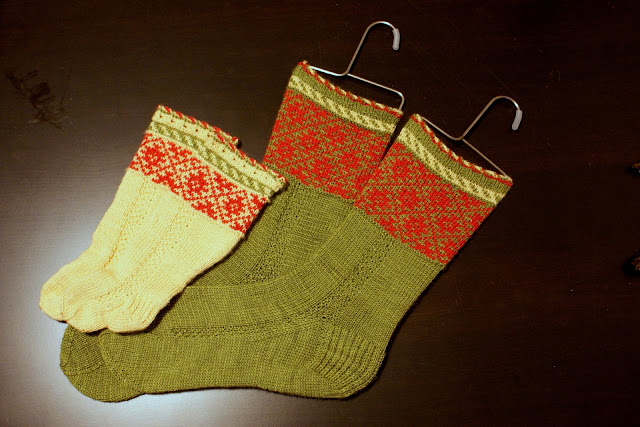 For the curious: I blocked just the fair isle cuffs of the baby socks over the toes of a pair of small sock blockers. Because you can’t not block fair isle. That would approach criminal negligence.

7 thoughts on “While You Were Out”