From Mom: I have one brother, Rebecca’s uncle: the one who, when she was between the ages of 3 and 10, would walk away with her at a party and not tell anyone.  “Where IS she?” I would ask.  Then I would find out that Richard was missing too, and I would know she was on another adventure … to the dreaded sledding hill,  a ride on the handlebars of his bike, on a monster walk, or just riding on his shoulders picking from the apple tree near by.

He eventually got older, slowed down, married a really really neat gal, and adopted a daughter from China, my niece, Anna.  And amazingly they live right in front of us!  So when I swatched some yarn and needed to know if he liked this or that for a promised sweater, I could just walk 200 yards and knock on his door.  I had knit up some random intarsia with blues and browns.  “Hmmmm…..he said.  I’m not sure I like that, but basically I don’t care what it looks like.  As long as it’s a cardigan and fits me right.”  Really??  “Yes, yes, really” he replied, with kindness.  He brought down the sweater I had made him about 20 years ago that fell apart in the elbows soon after I made it.  I had bought some crap yarn over the Internet back in the early days of Internet yarn shopping and me not knowing what I was doing.  But he still had it!  Probably still wore the dang thing too, even though it was too small and too short.

I looked through all my men’s knitting patterns and the Brandon Mably book Brilliant Knits.  I showed it to my mom and she and I both fell in love with the pattern called “Banded Stripe Crewneck Sweater.”  She assured me I could turn it into a cardigan, and find enough colors in my stash to pull this off.

Woa……I wish I had taken a picture of my swatch!  It was about 2 feet long as I pulled out about every single brown and red and blue and black….mixing colors and weights of yarn to try to figure out what the heck would work.  In the end I came up with this:

Theses are the 10 colors:

Colors 1-5:  Light brown to dark brown in a soft, chunky wool.  I dyed them myself in black walnuts as I am now experimenting with gradients.

Colors 6 and 7: 100% alpaca chunky, hand spun by my neighbor at “Alpaca Joy of Maryland.”  Animals name/color name from said yarn is from:  “Epiphany Joy” and “Rose Grey.” Richard even got to meet them on a long walk we took!  You can see those 2 browns in the wide middle vertical strip on the back of the sweater.  They are also incorporated into the stripes on the front and sleeves.

Color 9: Sublime, an extra fine merino/silk/cashmere.  This blue was the yarn I had hoped to knit with for Richard, but it turned out that 1500 yards was not enough to knit the interesting cable I had pictured, so I had to come up with something different.  It was not heavy enough in itself, so I paired it with a thin strand of tweedy grey.

Color 10: I paired that same tweedy grey with a plain rust, both labels of which I lost. 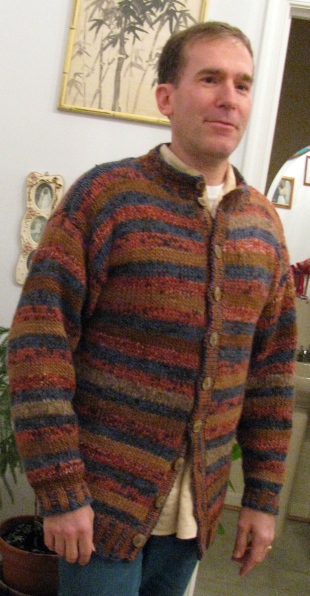 When I was figuring out the sizing for sweater and drawing sketches, he gave me two sweaters…..one was too big and one was a bit small.  So he asked me to make a size in between.  They were tan/brown sweaters, so I figured he must look good in that color….why had I thought he wanted blue?  Heck, the brown and rust thing might have been a good accent!  And the Mably sweater design had cool and warm colors mixed, so I accepted the idea that blue as an accent would be OK.

You know, whenever I am putting a set of colors together which are different from the original pattern, I always analyze the colors in the designer’s piece.  How many cool and warm colors?  Thus, what should the balance be?  Will this work in larger needles?  As I studied the Mably, I saw that it was knit in sizes 3 and 6 needles and had 27 stripes, differing in order on each side of the middle vertical strip.  15 colors too!  On the other hand, my proposed design would be knit in sizes 9 and 11 needles, had 24 stripes, and 10 colors.  Would this work??  I had tried many other colors in my stash to get 15 colors, but in the end, I had to narrow it down to these 10.  The other combinations made me puke.  Plus family members threw things at it.  Final 10 colors met with everyone’s approval.  Except Rebecca, who hates everything from the 80’s. [Or at least attributes my hatred of most fashion things I hate to it being from the ’70s or ’80s. I like the action movies and rock music.]

The other change I made was converting it from a fitted sweater to a drop shoulder sweater.  I did this because one day Richard dropped by while I was working on his design and wearing an old drop sweater cardigan.  Kinda ratty, but warm…..like wearing a comfy blanket.  He said he liked that!  Hmmm…..I thought.  Maybe a drop sweater design would make it more roomy and comfy.  Plus of course it’s MUCH easier to knit.  Sure, why not?

The 5 pieces of cardigan knit up in a flash.  I loved knitting this sweater!  There was never a time when it got boring.  I never “hit the wall” on the 2nd sweater front like I usually do.  I was able to knit it while I read to my home schooled daughter, Bethany, so it’s full of good literature vibes.  Since my brother LOVES Dickens, I thought this was a good thing.  I did forget to knit the neck line on the first sweater front, but it was easy to rip back and figure out.

As I was bringing this huge sweater to its conclusion and designing the button bands, I had a challenge for sure.  I tried many approaches before deciding on this one.  I think it works although everyone agreed that there were too many buttons.  Oh well.  You can see as Richard was trying his cardigan on at first, he was hesitant in confidence at wearing such a fussy mix of colors.  But his wife, Kelly LOVED it, (a great hope of mine so YAY!!) and by the end, you can see in this last picture that he “pulled it off” as Rebecca said.  He looks great.  And the size is just right.  And he said it felt soft on his neck and arms.  Whew.  Frickin’ WHEW!!