When a best friend you have known for a decade and been very close to for at least half a decade asks her to stand beside her at her wedding, you do darn well whatever she asks. When Rachel offered me that privilege, the first thing I said was yes, and the second thing I said was “Would you like a shawl?”

I’ve offered this to a few people, and so far have only gotten one yes. I don’t have a problem being turned down – when a woman is thinking about what she’ll be wearing on her wedding day, she isn’t usually thinking about accommodating her friend’s hobbies. But Rachel knew what she wanted: since she was planning a New Years’ Eve wedding, she wanted a shawl. A circular shawl. A chocolate brown circular shawl. Cue me going oooOOOOooo.

We had to narrow it down from there, of course. Knitting something that a person would even consider wearing at their wedding is a little intimidating, and I wanted to make sure it would fit any expectations that she might have but not know how to express. We settled on a pattern fairly easily: the Eyjafjallajokull Shawl by Anna Dalvi. No, really, it’s spelled like that, with an umlaut over the o. Mercifully I didn’t have to describe it out loud very often, and when I did I could refer to it as “Rachel’s wedding shawl” or “the unpronounceable pattern.” We picked it because it was pretty. 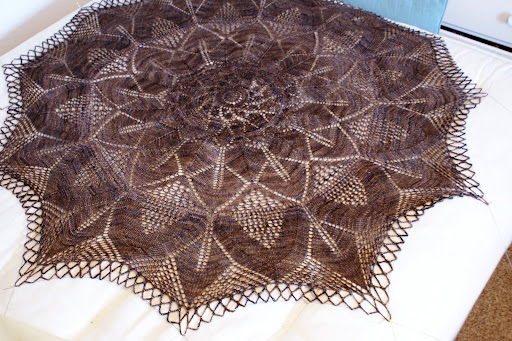 The yarn took longer to find. I considered using sock yarn I had dyed that was perfectly chocolate brown, but I wanted something with more softness than sturdiness. So I turned to my favorite staple: Madelinetosh Tosh Merino Light. I searched the internet high and low, but it’s very difficult to order a yarn online when you have a specific idea of what “chocolate brown” means. The variation between pictures on different websites was enough to make me quite nervous. I nervously batted around ideas with Rachel until she finally told me to just decide already! The woman had enough on her plate without fussing over shades of chocolate brown with me when I was really just being too timid. I ended up waiting until we went to Webs this past summer – an hour’s drive out of the way that was as much my husband’s idea as mine – where I could see the stuff with my eyes. In the end I bought three skeins of “Fig.” 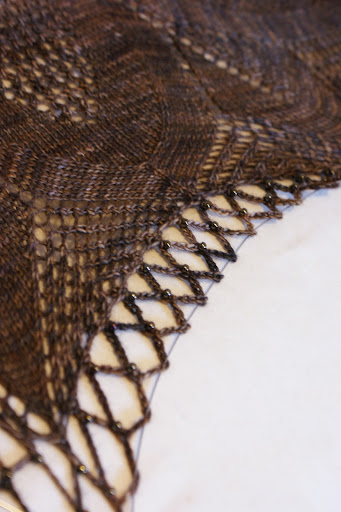 What is less well known to online Webs shoppers is that right next to the yarn shop is an excellent bead store. (Sorry, I forget what it’s called, and I don’t know if they have an online store.) Struck with inspiration, we visited on the way out, and picked up a couple of tubes of the most perfect dark bronze seed beads. I ended up adding an extra round of crochet netting to the border to make the most of this feature. 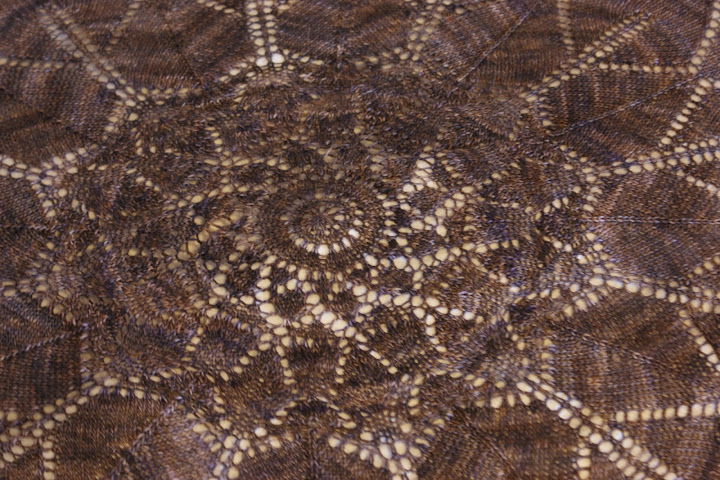 Pattern Review: The Unpronounceable Shawl is clear as daylight, as long as you’re okay with charts. The pattern does not include written directions, and I didn’t miss them at all since it’s really not that complicated. It is a fast and engaging knit, as the different layers of flower petals (or leaves?) are all a bit different from each other. I think I knit the whole thing in under two weeks, but was stalled when I couldn’t find the beads for two months. (It does in fact have 12 points, but I was convinced while blocking it that it had 11. This error made the job take a bit longer than it should have. A-doy.)

I’m not going to review Tosh Merino Light for you again. I’ve knit two enormous circular shawls with it in the last year, I have four more skeins in the stash, three more in my hold bag at work, and I’m seriously close to falling for some incredibly dark and slightly iridescent blue that just came in at the shop. That should be review enough for you. It’s butter. The price has gone up, but at under $20 for a 4 oz skein, it’s still among the most affordable of hand-dyed fingering-weight yarns. 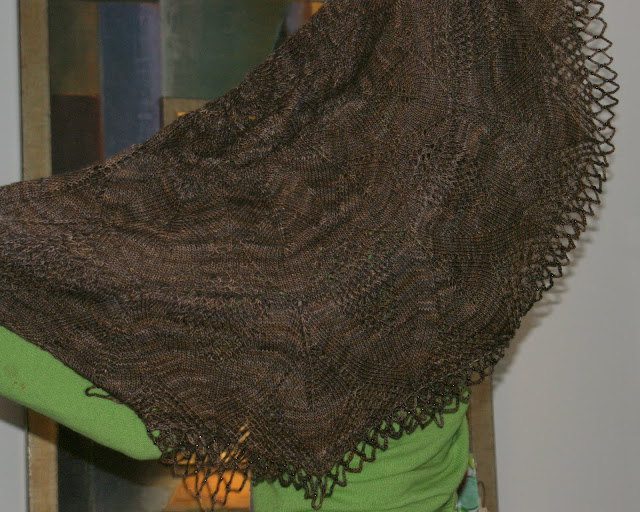 Rachel had gotten plenty of sneak peeks of the shawl during our weekly Skype dates, but she was still pretty excited to receive it in person at her bachelorette party. But not as excited as I was to see it on her on her wedding day. 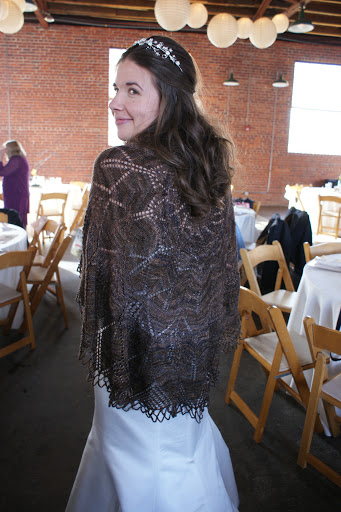 I’ve never been much of one for knitting for others. Most non-knitters aren’t even capable of appreciating the level of work that goes into a hand-knit item, and besides, I pick patterns that I like for me. But a funny thing happened to me two days before Christmas, when I was waiting in line for the Messiah Sing at the Kennedy Center with my husband, his sister, and their dad. We were stuck outside for a couple of hours, and were hanging out on our camp chairs playing with each others smart phones. And I looked up to see both Jared and Carina’s heads were being warmed by hats I’d made them. Not recent acquisitions – Carina’s hat was last year’s Christmas present, and Jared’s was older than that. And suddenly I knew how people get hooked on making things for others. It doesn’t matter how much it’s appreciated (though these two did appreciate it). It’s the evidence, right in front of you, that the work of your hands is keeping people you love warm.

This was magnified to a new level on Rachel’s wedding day, on the chilly-ish last day of 2012, during that giddy disorganized dance of post-ceremony pictures, when Rachel was just wearing her shawl to keep warm. In the pictures! I hope this doesn’t sound completely odd, but that meant nearly as much to me as being beside her when she took her vows an hour before. I knew she would appreciate it, as she is not only a knitter but a prolific maker of knitted gifts, but this was a big deal. Those vows will last a whole lot longer than a piece of clothing made from string, but that string was another way that I could feel like I was tangibly guarding, encouraging, and strengthening my friend during one of the most important days of her life. 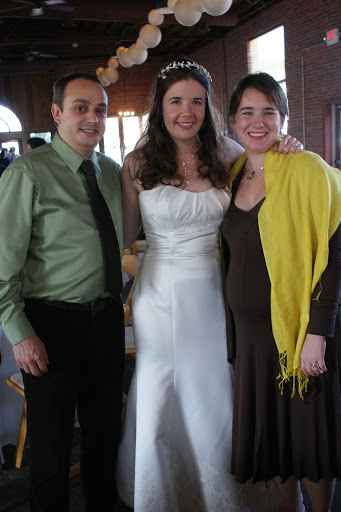 It was a beautiful ceremony and a beautiful day, and a beautiful bride. (The groom wasn’t bad looking either.) It’s pretty amazing coming to a day like this with a friend when you’ve been next to each other through so much. It’s the sort of thing you can’t even process in one day of celebrating (or three days). It takes a while to let that kind of joy sink in, to reflect on it, to chew on it, and to watch what it becomes.