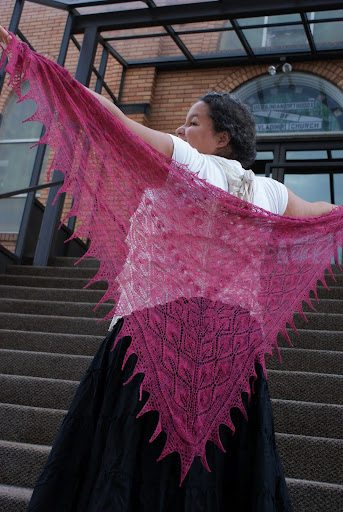 When I first conceived the idea of the Pentecost Mystery Knit-Along shawl, it already had a name in my mind: Seretha. That’s the name it has on all my pattern drafts, it’s the name of the shawl I made, and it’s the name of its recipient. I changed the formal name of the pattern to Tongues of Fire, because I have a descriptivist habit and I didn’t know if I wanted the shawl to be a surprise for its namesake. But it’s only ever had one name in my heart.

So what would induce me to name the most complex, difficult, beautiful pattern I have ever designed after a person? I will tell you.

Seretha and I met on the very first day of college. Technically, it was a week before college; we were in the same honors program at a small Christian university near Philadelphia, and they’d taken us on a week-long camping trip in the Adirondacks. Seretha and I were assigned to be prayer partners, and were in the same tent. Our friendship started that week, as part of a tight knot of friends that stuck together through all of college.

For a homeschooled girl who had never had a group of friends to call her own, these relationships were revolutionary. I always had friends, but I either saw them rarely, knew them for a short period of time, or I was not part of the group of friends that they were closest to. Finally, that changed. In this group of (mostly) girls, there was safety and sanity. They showed me love, constancy, decency, and good sense, and Seretha was our ringleader. These were the friends that gathered around me and fasted and prayed for a week when my parents split up, and that rejoiced with me when they reconciled. These were the friends that met every week to sing hymns around a piano and study the Bible. It was heaven. I never wanted it to change.

But of course, it did. Communities aren’t made to stay the same forever, or they become inbred and stagnant. I didn’t know this, and it was hard for me to let go, because I didn’t have anything else. I had learned what it was like to have a group of close friends, and I’d learned how to participate in close friendships, but I didn’t know how to build them when the opportunity didn’t just present itself. I had not developed close one-on-one relationships with many of these girls, mostly for lack of confidence and knowing how. We stopped meeting for Bible study after three years, and broadened our circles of friends. Seretha was the one I was closest to, but she was close to most of us. And though I tried with a couple of them the first year after we graduated, we lost touch for the most part. I got married. A couple of years passed. I saw most of them a few times, and the closest ones a couple more times. I had a few friends, but not a community. Not a support system. 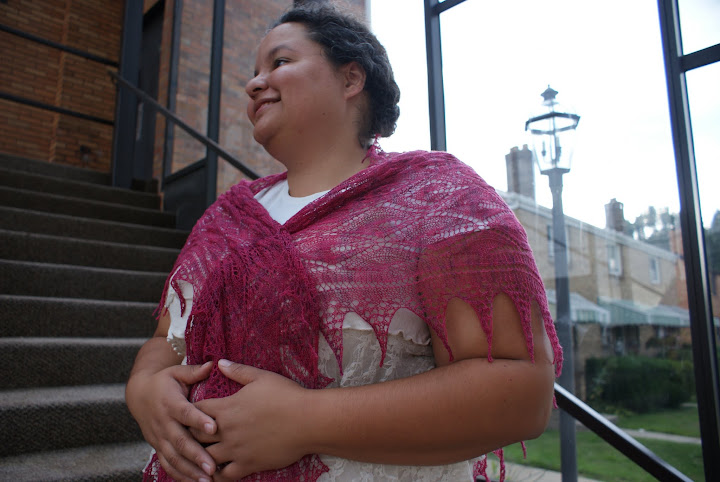 Seretha had been at Trinity School for Ministry for a year and a half when Jared and I arrived. I re-met a friend who I had watched grow and change from a distance, a strong leader who had acquired more softness, openness, and charity, whose faults I could read more easily, but whose core of virtue had only solidified. She re-met a friend about halfway through her latest journey through spiritual hell, a workaholic relationship-avoider, who didn’t know (or care) what she wanted in life, but was as doggedly determined as ever to be honest and do what was needful.

You’ve never met a more naturally pastoral person than Seretha. Not in a people-pleasing, charismatic, or overbearing sort of way, but in that she’s the sort of person who will really listen to you and engage with what you’re saying, work as hard as she can to understand what’s going on (and in the process help you understand whats going on), tell you the truth without a blink. Plus, she has always had for her age an unusually large store of good sense about relationships, spiritual life, and just how people tick. Somewhere in between a counselor and a friend is a spiritual director, and this girl was both born to it and works awfully hard at it. 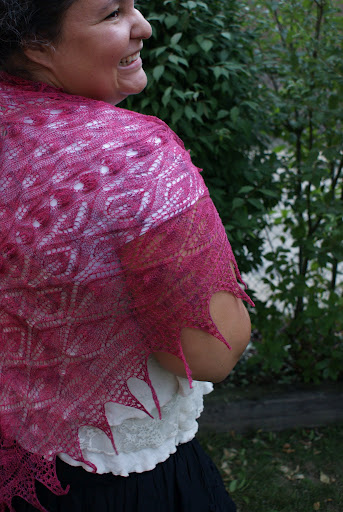 This is the person who has walked with me through the past two years. Spending time with her has taught me how to think clearly, how to be honest, how to have good boundaries, how to be easier on myself about things that matter, and harder on myself about things that do matter. Watching her has taught me what profound friendships look like and why they matter, how to think through relationships, how to make hard decisions, how to process hurt, how to let people go, and when to pursue reconciliation. Thinking together with her, we’ve discovered more about ecumenism, emotional health, personality, community, and nerdery – though she is usually at least one step ahead of me. She’s learned things from me too – our friendship is far from one-sided. But I probably wouldn’t even have learned how much I have to offer, or become good at expressing it fearlessly, if not for her.

As I came out of my first class of the semester, on Pastoral Care, I was convicted of two things. Most people are isolated from both each other and from themselves. They don’t know how to have an inner life, in which they grow a relationship with God and deal with their issues. And they don’t know how to treat other people well (in a deep way), or how to build the sort of deep friendships that make life livable. Most of us are lonely and aimless, and don’t even have the tools to figure out why. I know that because I would probably still be that way if not for this one person whom God plunked in my life and sent in the same direction for a good while. And I understand now that this is the main calling of a pastor – and of any Christian friend – is to do everything possible to direct a person more towards God, which happens not through platitudes, but through healing and relationships, in the context of a missional community, submitted to the Lordship of Christ and pursuing the Trinitarian God with all we have.

So I made this shawl for Seretha. It takes the Holy Spirit to change a life, but how does he do it if not through people? I made it to remind her, during a time of exploration and further discernment, of how much the Holy Spirit has already done through her. I made it to thank her for all the things she has taught and is teaching me about what it means to be a friend, and for helping me along this path to wholeness. All those things are more complicated, more difficult, more painful, take longer, and in the end are more rare, beautiful, and enduring than this shawl. It’s the stuff that makes people into people again. It’s the stuff that makes life not just livable, but good. Good like grace. Grace made of fire.

“Tongues of Fire,” also known as “Seretha,” is part of the Liturgical Year Pattern Series, and is now available as a complete pattern on Ravelry.

6 thoughts on “On The Art of Friendship”