It’s a pretty cool thing when enough people get to know you that when something right up your alley comes your way, four different people, half of whom you don’t even know, feel the need to tell you about it. That’s what happened to me concerning Saturday’s even at Old Economy Village for Worldwide Spin in Public Day. 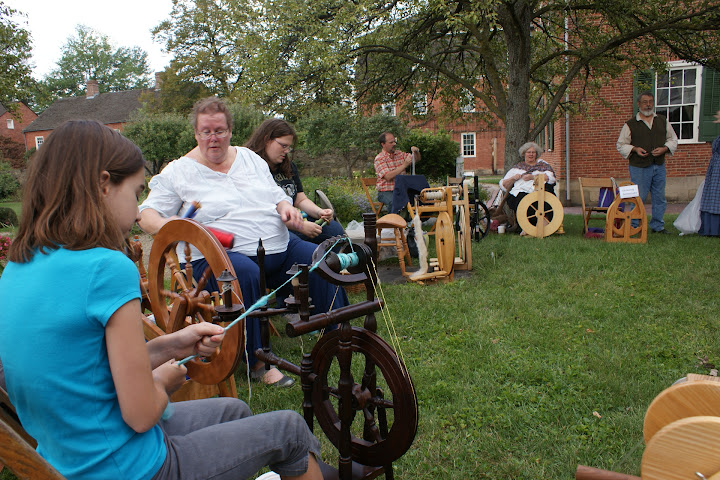 I don’t usually get to participate in these “— in public” events, because I forget about it until it’s too late to find a way to participate. The closest I got to participating in Spin in Public day was back in 2009, when I plied some merino on a drop spindle hanging off my porch. (Here’s a post about that from long ago). But a volunteer at Old Economy got it into her head over a month ago that we should have it here. I knew about it with plenty of time to plan to participate, and even invite Mom and Bethany to join me.

Mom brought red with her, and worked on spinning some singles out of the silver fleece that she dyed blue and carded on her new drum carder. I am not in a position to make any long-term spinning commitments, so I brought Mr. Fricke to mess around with some novelty yarn ideas, mostly unsuccessfully. And Bethany can usually stand about half an hour of messing around on Doris, though we discovered halfway through that Doris has chafed from much neglect and needs some mechanical attention to function properly.

I had to go around and see what everyone was spinning on, which included everything from louets and ashfords and a lendrum to a few kromskis and a country craftsman. Not to mention a few drop spindlers, who always strike me as impossibly patient. Mr. Fricke was the most modern-looking of the bunch, with his shiny whorl, and Doris was one of the only antiques (and probably the oldest). 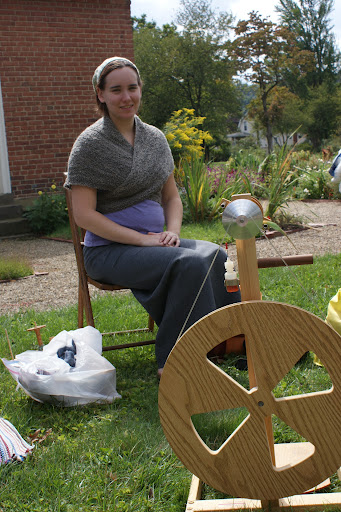 It was also the first chance I had to bust out my Sontag, still unblocked, that was my main olympic project. Spun in the most rustic way possible from the same silver fleece that Mom had carefully carded, it’s a triangle meant to be worn as a sort of shrug. It’s highly practical, looks very traditional (I think), and sits handily above my rapidly increasing bump. 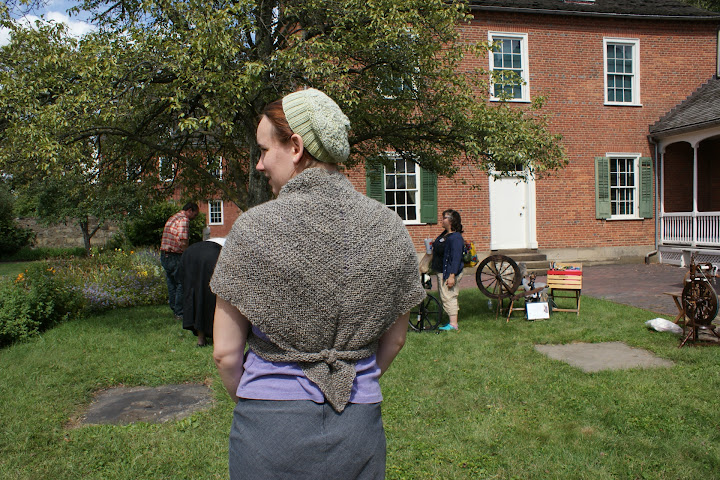 I was much happier to be there than I appear in these pictures; I was dealing with the sudden attack of a head cold that appeared Friday night.

I do hope that Old Economy host an event again next year, maybe starting earlier in the morning. When you have this much equipment to haul and set up, 3 hours just isn’t enough!

4 thoughts on “In Public”