As I’ve said before, some patterns are born full-formed from the mind; some are vague ideas that come to fruition after extensive research… and some are inherited. From yourself.

Back when I first started knitting intensely, when I believed that there was never any need to buy anything but the cheapest available option of a commodity, I knit a bunch of sweaters. I didn’t follow patterns for any of them, because following a pattern sounded hard. I had enough sewing skill to figure out how clothes are shaped, so I just knit things in those shapes. Most of those sweaters are gone now, because they weren’t really that well-conceived. But a couple have persisted. Call it beginner’s luck.

The cable on what would become Ordinary time was charted out in the margins of my notes for Cosmology class, sophomore year of college. The first, and for many years only, of this sweater was knit out of Red Heart Super Saver.

I loved it. It just worked. The hood was all wrong (turns out I didn’t actually know how hoods were shaped); I put it through the wash many times, killing the acrylic so it grew to be enormous; I reinstalled the zipper and fixed holes in the seams over the years. When I got really intense about  knitting, I really meant to write the pattern down and publish it, but then the unthinkable happened. On our first anniversary, on a bus in London, I left it. I didn’t realize until we were on the plane that it was gone, and by then it was gone forever.

I didn’t pine for that long. Frankly, it had been a good sweater and served me well for a long time; it had gotten a little ratty and I had been ready to replace it. I had documented it with pictures already, so I could re-make it. By the time the idea of the Liturgical Year Series had been conceived, I was ready.

Why give a complex, advanced sweater a name as mundane-sounding as “Ordinary Time?” If you’ve grown up Catholic, or in one of a few variants of liturgical Protestantism, you know that “Ordinary Time” is the long liturgical season between Pentecost and Advent when the altar cloths are green and nothing that interesting happens. Some Anglicans chafe at this name, preferring to call it “Pentecosttide” (meaning “the time after Pentecost”).

This long season – and this sweater – means all of those things to me. The time of the church, of the Holy Spirit, of Pentecost, is upon us. It’s the most exciting period of history we could be in spiritually, the already/not yet of preparing for God’s kingdom. But for the vast majority of our lives, that takes place in ordinary ways and moments. Even missionaries and priests have a life that is fairly normal (to them), and that is the crucible for character and growth, the place where kingdom-building starts. (Green is a near-global symbol for growth.) In a way, there is no such thing as ordinary time for the church. But I think of it more as a paradox: the most important times in the world are the ordinary ones.

You know what I’m taking about, if you think about it. The words you say every day to your best friends, your children, your spouse; your choices to build them up or say something nasty. It’s taken a long time for me to distinguish between the pursuit of virtue and perfectionism. It’s taken more healing than thinking to get there, so the only description I can give it is that perfectionism is about meeting an anxious emotional need; the pursuit of virtue is about doing right, becoming more whole, and making the world immediately around you more whole instead of less. 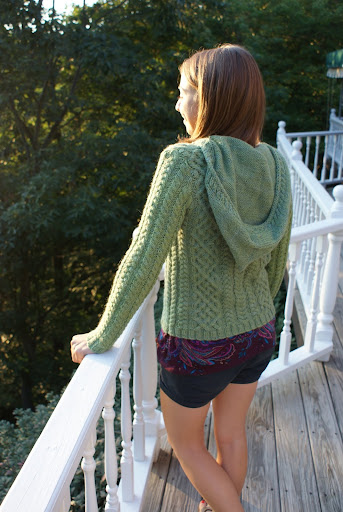 And by golly, that makes for hard work. Advanced work. Complicated, non-stop work that requires reflection. Can you see why it might be not so hard to associate this sweater with these ideas?

About the sweater. My copy editors wanted to make sure I tell you that this is an advanced project. This is sort of true. The main skill that might make it “advanced” is that you have to be able to intuit on armhole decreases how to stay in pattern as long as possible. For some people this is obvious; for other (very good) knitters it is not. I’ve included written directions for the fronts, back, and sleeves to go along with charts, but I didn’t chart out the armholes themselves. If you can continue an established cable with the help of a chart, you will be fine. That’s why I’ve chosen to class this sweater as “intermediate to advanced.”

The second thing to discuss is fit. The pictures with me wearing it show 2″ of negative ease at the bust, so it’s quite fitted. This is how I intended it to fit, but I might not be wearing it again while I’m sharing my body with another person. The pictures of sissy-in-law Carina show it with about 4″ of positive ease, which is more how my original version fit me. You may wish for a fit somewhere in between, but use these pictures to help make your decision.

Third, if you don’t like hoods and/or zippers, the sweater includes options to finish the sweater with a button band and/or a round collar. These have all been tested. 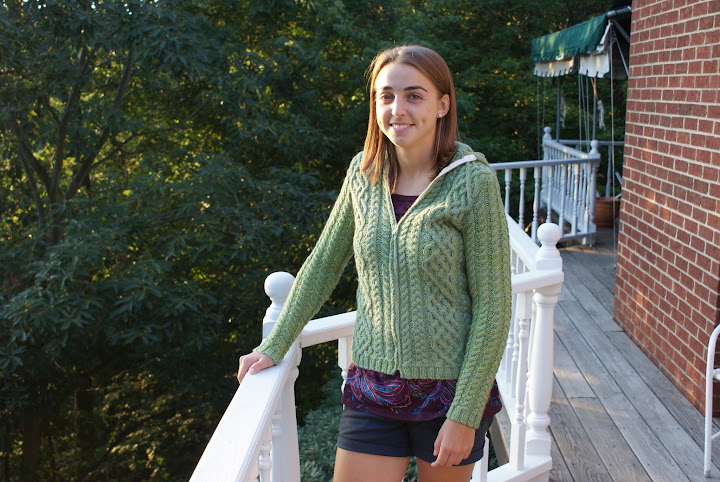 Finally, yarn. I specifically designed this pattern for the wool/alpaca blend of Kirby Woolpaca, which relaxes significantly more than a 100% wool when severely blocked. Another yarn like KW is Berroco’s Ultra Alpaca; you all can probably think of others. If you chose to knit this sweater out of a 100% wool, or something close to it that has more memory than drape, knit the next size up from what you were going to knit. Your sweater will be significantly more elastic. 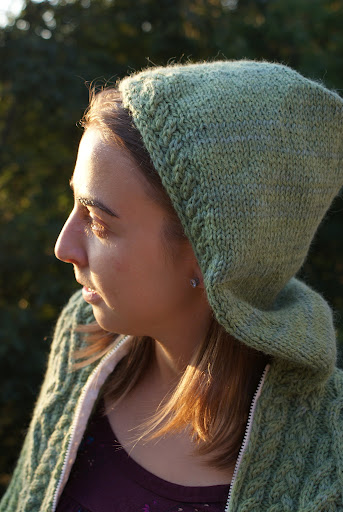 Kits of this sweater are now available on our kits page. The stand-alone pattern is available here through Ravelry.

Big thanks go out to Mom for her beautiful yarn, to test knitters Mom, Annie, and Sandra, and to copy editors Karla and Sherrie. You guys are the difference between good and excellent.