So, it had been my hope to provide you with several essays leading up to the Pentecost celebration about what the holiday means, the symbolism involved in its celebrations, and the themes associated with it. I should have guessed that between the end of the semester and moving, it’d be a bit much for me. So instead, I give you this brief overview of all the themes I associate with Pentecost, which will provide a layout for the essays that will accompany the seven clues of the Pentecost Mystery Knit-Along.

The story of Pentecost continues to follow Jesus’ life that began with Advent (or, if you like, with the Annunciation on the March 25th before last Advent). Jesus had risen from the dead, and was walking around, appearing to his disciples and many others. He had mystified them with his miraculous appearing; with the marks in his hands, feet, and side; and with the announcement that he would soon be going away, but sending them another comforter. Forty days after he rose, the disciples watched him go up into the sky on a cloud, unsure if their awe would overcome their heartbreak. Still unsure, they huddled for ten days in that upper room that they’d been renting since the Last Supper, confused and afraid.

That’s where they were when the story picks up in Acts 2: “When the day of Pentecost arrived, they were all together in one place. And suddenly there came from heaven a sound like a mighty rushing wind, and it filled the entire house where they were sitting. And divided tongues as of fire appeared to them and rested on each one of them. And they were all filled with the Holy Spirit and began to speak in other tongues as the Spirit gave them utterance.” (vv.1-4, ESV)

The sound was so powerful that it gathered a huge crowd around the house they were staying, wondering what had happened. This became the first “revival meeting,” if you will, as the first thing the disciples did was preach, with the Spirit translating for every hearer. Something had changed; the Jesus’ presence was with them to empower them to tell his story, that they might believe in them. A group who believed the story gathered together, and the Church was born.

This story gathers an abundance of themes that make up the Christian life, which is what we celebrate for the remainder of the liturgical year. Called variously Pentecosttide, Whitsuntide, or Ordinary Time, we recall the meaning of the age we are in now, that of the church.

The holiday of Pentecost (or Whitsunday) is celebrated in many traditions, with some common symbols in each. I will focus on what I know; that is, the Anglican/small-c-catholic celebration. The event of Pentecost is commemorated and re-enacted in additional ways by some younger denominations (namely, Pentecostals and charismatics), whose passionate abandonment to the Holy Spirit became an infectious revival that has spread through most other denominations in the last fifty or so years, and that has become a phenomenon around the world.

The story of Pentecost brings up many important questions. Who is the Holy Spirit, really? What does it mean to be filled with the Spirit? What are the so-called gifts of the Spirit, how freaky are they, and what do they mean today? Derivative of this story are themes concerning the Church, whose birthday is considered by many to be Pentecost. What is the church, anyway? What does it mean to be a church, or what counts as a church? How does it fit in with current-day notions of community, society, and belonging?  It also brings up the themes of preaching, since the first thing Christians did was to preach, and priesthood, both of all believers and the idea of a special class of believers set apart to serve the church. For me, the Pentecost story raises the ever-enormous question of women in the church; was it only dudes in that room? The photographic evidence is inconsistent:

What questions does the Pentecost story raise for you?

Over the next fourteen weeks or so, I hope to review some of these themes. My point of view comes from a half-complete (I won’t say half-baked) seminary education, but also from a desire to understand things in every-day, straight forward terms. (A personal rule of thumb: if I can’t explain something accurately and comprehensibly to a 10-year-old, I probably don’t understand it well enough. Now, I can’t say that 10-year-old won’t be bored.)

My perspective is also ecumenical: I am coming from an Anglican, reformed-catholic theological position, but I’ve spent a good deal of time in the Roman Catholic and independent Evangelical worlds. My interest in discussing these things is to express a sufficiently nuanced point of view that most can agree on, and to qualify where there is major disagreement. My ability to do this is limited by my exposure to other denominations, so I welcome correction when I misrepresent someone.

That is what we will be discussing, and the way in which I will be writing. If you wish to discuss, express, regale, or debate, you are welcome to do so here on the blog, or in the OFS ravelry group. Everyone’s been fabulous to each other in the past, so I don’t feel any need to instruct your behavior. I am writing to write, because it helps me to think, and become sometimes people seem learn from it, but I hope to learn from y’all as well. 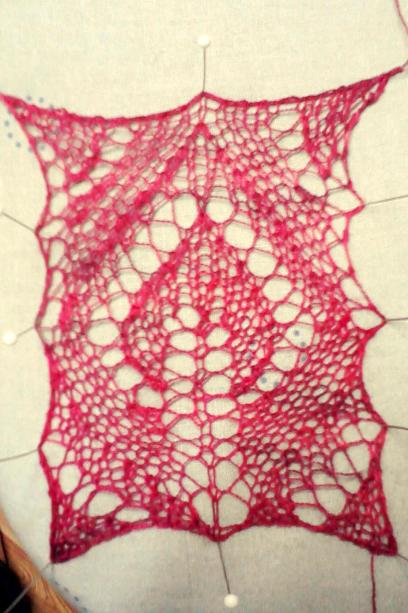 And of course, all this will happen while we knit together on a rather complicated bit of lace, representing in many different types of stitches the variety and unity among those who have received one faith, one baptism, one Spirit, one hope in God’s call to us. I’ve made a swatch pattern, so you can test drive the pattern and see if it’s your cup of tea, and to get a feel for how my patterns work if you’ve never knit one of them before. Click here to download it. I don’t think this wee swatch gives much away, since it’s the same bit I’ve been showing in the adverts.

2 thoughts on “Themes in Pentecost”