Everyone loves Robert Frost’s famous poem, so much so that to quote it would seem cliche. This project hijacks this old-school meme, just a little bit. The concept is simple, and doesn’t bear much explaining beyond the pattern description. These cables are meandering roads that come together to form the icthus fish – another cliche that is here becomes a little more subtle. 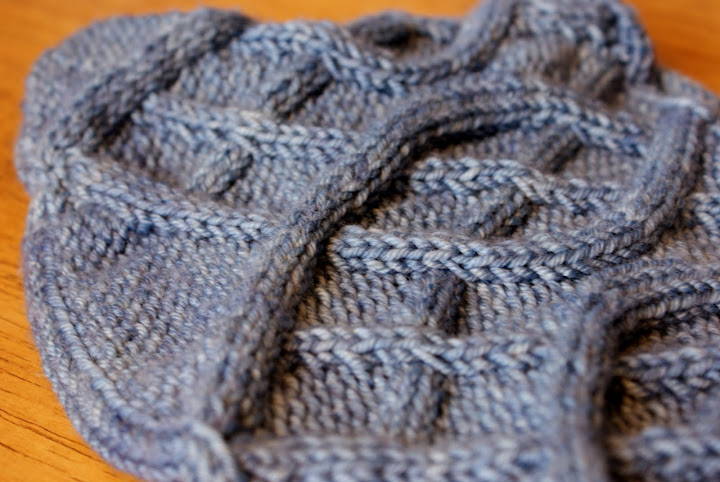 I like the idea of redeeming symbols, concepts, or phrases that have been lost in cliche or regularly misused. For example, I rebel against the popular rejection of the word “religion” among some evangelicals. Just because a part of your identity has been misused or misunderstood does not necessarily mean that you reject it for something else. That’s the way of the schismatic. See if it can’t be redeemed – that’s part of the path or reconciliation and integration, which is at the heart of the gospel.

The Bible phrase “In the world, but not of it” has such a cliche. But, if there’s anything to a Christian “Road Less Traveled,” that is part of it. Despite the common paradigm, this does not mean taking sides in a culture war. For those who think so, I appear much less “Christian” now than I did when I was seventeen and listening to Christian music, shopped at Christian bookstores, never cussed, and thought I would never drink.

The actual road less traveled, I strongly suspect, is that of wholeness, healing, and integration. A lot of folks start on this road without Jesus, though you can’t complete it without the way of the Cross. The world is too upside down for that; it needs an upside down kingdom to find your feet. That path is more work than I ever imagined was possible for a human being to do. And the Christian calling is not only to travel that path, but to recruit and help others down the same path. It’s a terrible, wonderful calling that I’m only starting to understand. 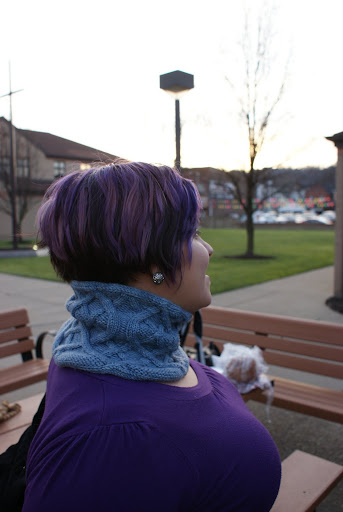 That’s a lot to capture in one little cowl, but that was my meditation as I made this little gem. Insert your thoughts here – I am no moral relativist, but I know that each path takes a different course. Considering the next bit of the path in front of you seems an appropriate Lenten discipline.

It takes 100 grams of just about any worsted-weight yarn, and will knit up before you can say “boo.” It’s the time to splurge on a luxury worsted weight that you (read: I) could never afford to make a sweater out of. I used Anzula’s “For Better or for Worsted,” and it outshines it’s own punniness. The colors are deep and layered, the fiber a plump and cushy blend of Merino and Cashmere. I picked blue since it is a generally accepted derivative of liturgical purple. 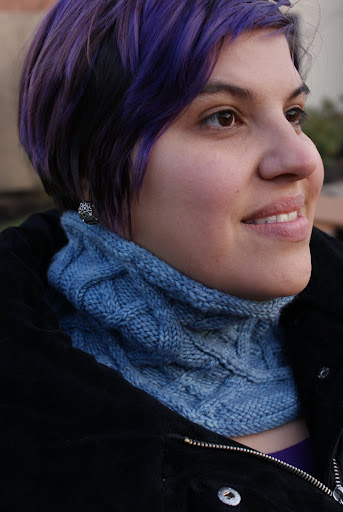 “Road Less Traveled” is available on ravelry for $4.00, and has been sent out to subscribers to the Liturgical Year project. I bet you can finish it in the next two weeks…

5 thoughts on “Behind the Design: Road Less Traveled”