My stated goal: To make a sweater that fit in with the “new” sense of style I have been acquiring since my Halloween haircut: dark, feminine, professional, comfortable.

The yarn: Shelter by Brooklyn Tweed, in “Long Johns,” 9 skeins. 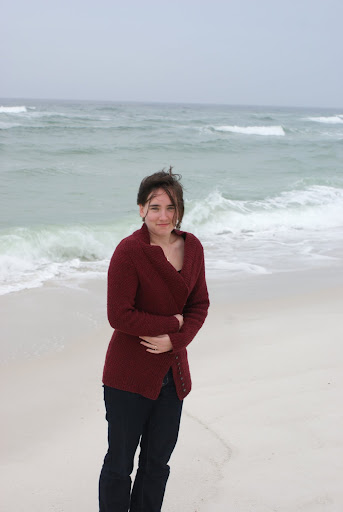 I knit this sweater in about a month, and it will be permanently associated with a good bit of the 2000 or so pages I had to read over Christmas break. I read four books through that sweater: Simply Christian by N. T. Wright, Fabricating Jesus by Craig Evans, The Problem of Pain by C. S. Lewis, and Surprised by Meaning by Alister McGrath.

This was reading knitting, no doubt. The bulk of it was moss stitch (or whatever you call K1, P1 for 2 rows, then P1, K1 for 2 rows), framed by 1×1 ribbing. This means that every single stitch alternated between knit and purl. As a right-handed knitter, if I hadn’t developed this style of knitting a few years ago, I would have lost my marbles halfway up the back. As it was, I was pretty sick of alternating between knit and purl by the time it was done, and immediately did four projects that were all stockinette or garter. 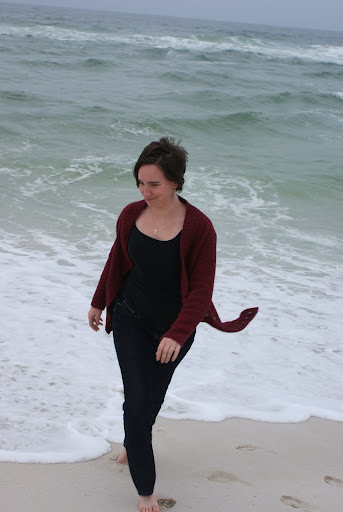 Pattern review: I learned a new thing about evaluating patterns before I knit them: pay attention to the fiber content of what the sample was knit in. The recommended yarn for Victoria was a Merino/Linen blend, and linen tends to drape and sag and grow, quite unlike the 100% wool I was using. I might have noticed the issue if I’d payed attention to row gauge in my swatch, which I never do. I tend toward a shorter row gauge anyway, but mine like 32 rows to 4 inches instead of 24. That’s redick.

As a result, my buttonholes (which I dutifully placed every 10th row) were super-close together, and instead of 9, I had to make 13 of them to reach the stated length before neck decreases. That’s the more obvious issue, but the more disappointing one is that it messed up the collar, which is what I loved most about the pattern to begin with. Shorter row gauge means the neck slope was sharper, and doing the stated number of rows on the collar got me barely half as far. (And I was nearly out of yarn anyway – another disadvantage is that it took a bit more yardage.)

ANYway, that was all my fault, not the pattern’s. I loved this pattern, and despite the issues, it’s taken all my willpower not to wear it every day and sleep in at night. It’s simple and sharp, and while that makes for a boring knit, it makes a fashionable product. Besides, I like boring knits these days. 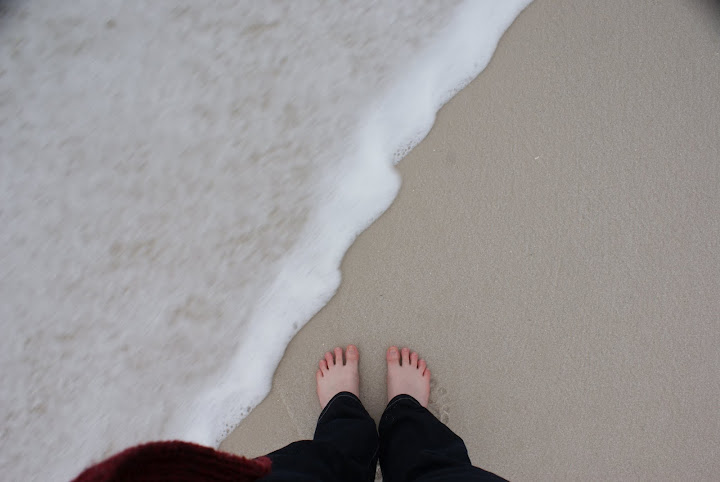 Yarn review: Shelter. Ohhhh shelter, how I love thee. [Aside: there must be some song with the word “shelter” aside from that by the Rolling Stones. This is only a problem because every time I picked up the sweater to work on it, within five minutes I was singing “rape, murder / is just a shot away / is just a shot away” which is just distressing.]

As I suspected, Shelter is light, lofty, and warm, but for all that is hardly pilling at all. The color is a dark, rich, tasteful tweed, and there’s a surprising amount of worsted weight yardage for a 50 gram hank. My slight concern is that it’s a little fragile. It doesn’t pill, but it breaks just as easily as a single of the same thickness, and I’m worried that it will break easily if the garment catches on anything, and that it will just wear through. Only time will tell, and that’s not going to stop me from buying more of it. I already have a few projects in mind for its fingering-weight cousin, Loft, which I tend to get my hands on before long.

So anyway, that’s my latest sweater. Why am I so bad at posting in-progress photos these days? I chalk it up to laziness, which sounds much better in Spanish: flojera. Oh, and the fact that I don’t want to give away my designs before they’re all finished and pretty, heehee. Speaking of which, I have a couple of swatches to un-pin…