… and back to the mundane again. The mundane, but the lovely mundane. After all, we fight the good fight and run the race so that we can have a good home to come back and enjoy normal, human things, right? And, at least in Christianity, becoming more human doesn’t mean becoming less embodied. That’s my excuse for being as distractedly into clothing myself in wool as I am, and I think it’s a darn good one. 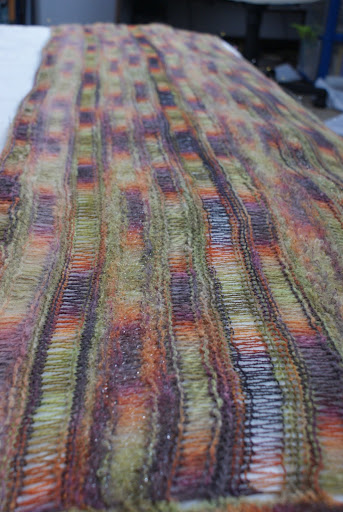 This is a project that I finished nearly a month ago now, but never got around to showing off. For Christmas, Mum got me this cool set of mini-skeins, all different textures but dyed the same, and I decided to make them into a scarf-like thing. The pattern was this: Cast on 200 or so, then with each skein, K4 rows, K 1 row wrapping three times, K3 rows. This set was labeled “DK,” so I used US8s for a relaxed fabric. I might added or removed a row here and there so I could use all of each skein that I could.

The ends needed something done to them, and I wasn’t sure how. But I felt myself slowly overwhelmed with a strange and disturbing desire… to crochet. The urge didn’t go away, so when I finished the body of the thing (on Thursday of the first week of Jan terms), I pulled out the ol’ hook and used the leftovers to make a secure little border at the end of a fairly floppy piece of work. It adds a bit of structure, I think. 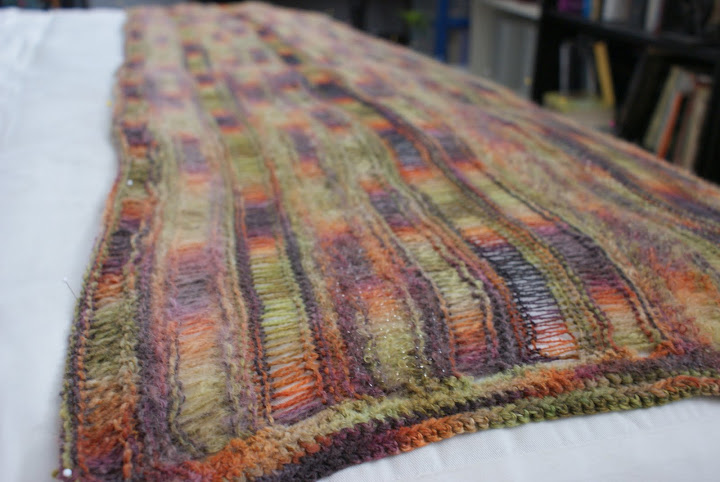 In crocheting the border, I ended up chaining a few extra to jump across the gaps left by the elongated stitches. On one end, I sewed up the holes this made. But on the other, I didn’t. Because the holes, it turns out, looked remarkably like buttonholes. I ended up buying four big (expensive, but beautifully coordinating) buttons, which makes this little scarf into a shockingly versatile piece.

A note about the pictures that follow: in my mind, this was going to go down a lot differently. I was going to be wearing something hip and fashionable, including actual jewelry and makeup, and I would get a series of hip fashion shots showing all the different ways you can wear this scarf. What ended up happening is that I caught my spouse at the first chance I got, and rushed him out the door to take a few pictures as fast as possible on a cold day. As a result my hip outfit included the fleece with the singe marks on it, and my attempts to look like a suave model mostly just look disgruntled and cold.

Anyway. All that to say, despite what these photos communicate, I’m very happy with my new scarf, and it does actually make me look cool when I put effort into dressing myself. 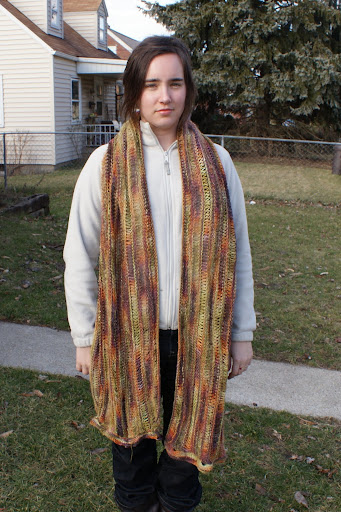 Style #2: The inappropriately long infinity scarf. You, of course, would remember which way to button it, and wouldn’t cast on quite so many stitches as I did (I think it was closer to 275), so this style actually worked. 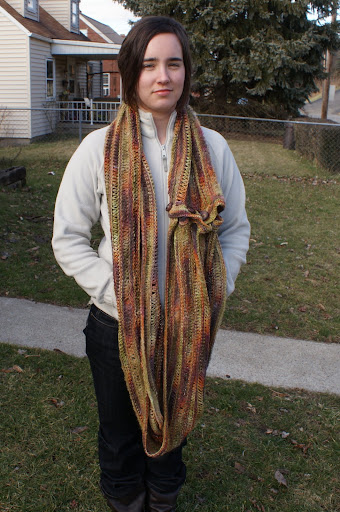 Style #3: The less-inappropriate double-looped infinity. Can also be attached as a mobeus, and may in fact be so by accident. 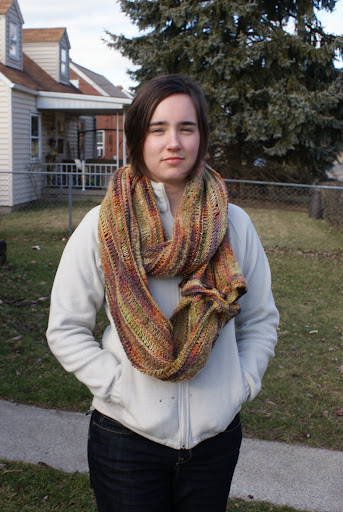 Style #4: Triple-wrap, either plain, or in a slick assymetric fashion. 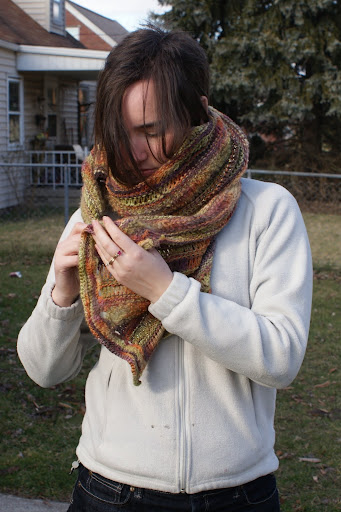 Style #5: (And the one I actually like to use on purpose): Fold the scarf into fourths, with the buttons facing outward in the center, then put the buttons through both layers of fabric. 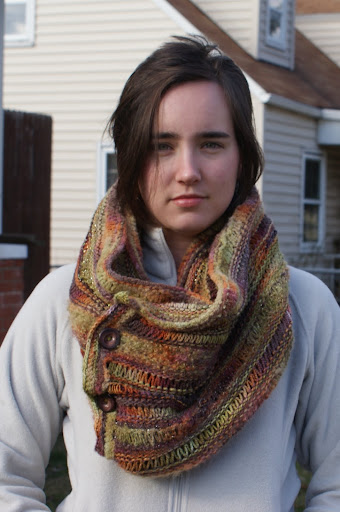 Not bad, eh? I think it makes the most of the yarn, and it’s awfully fun to fuss with and think of new ways to wear it.

Coming up next – what mum did with her present. And coming soon: testimonies from my alliterative friends Jonica and Joni.

One thought on “Fashion Twelve-ward”