My first paper of the semester is due on Tuesday, and due to a series of social plans for things I actually want to do, tonight is my only chance to put any real time into writing it. Any hope I might have of an academic career is seriously called into question by the fact that I Hate. Writing. Papers. It’s not that I’m particularly bad at it, or that I object; I just hate the actual process of making coherent thoughts on demand. I resent it. Much the way that some people hate sewing up seams and weaving in ends. I have consigned myself to this proclivity, and I have finely-honed systems of avoidance, procrastination, and anxiety to manage my productivity. One of which is writing a blog post instead of a paper.

Last week, it was suddenly really cold. Okay, so it was in the 40’s. Cold-ish, but not enough that I’m willing to pull out my winter coat. It’s just not time yet. I’m not ready. So I’ve been managing the weather by the careful, woolly insulation of extremities and pulse points. This includes the obvious – Wool socks, layered over cotton, and hats. But I’ve also been experimenting in the less-than-typical. 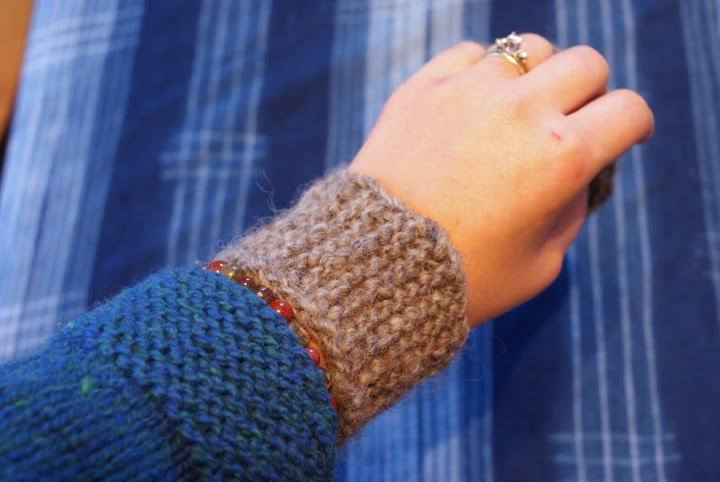 These wristwarmers were made with less than 50 yards of bulky handspun (not mine) that I’d acquired in a gift basket and found too cute to part with, so I had to invent something weeny-small enough to make it useful. Hence, wrist-warmers. If you’re thinking, Wrist warmers? Like… sweat bands for pansies? The Richard Simmons of knitwear? I know what you mean. But I heard once (don’t you love how “I heard once” is an actual authority source for me?) that insulating pulse points – places from which you can take your pulse, because blood vessels are close to the surface – can go a long way toward keeping your internal body temperature up without bulky outwear. So I decided to try it, and wow. I didn’t take them off outside the shower until the temperature got back above 60. Pairing them with fingerless mitts doubled the effect.

On the complete opposite end of the skill spectrum, I’ve started a pair of lace gloves: 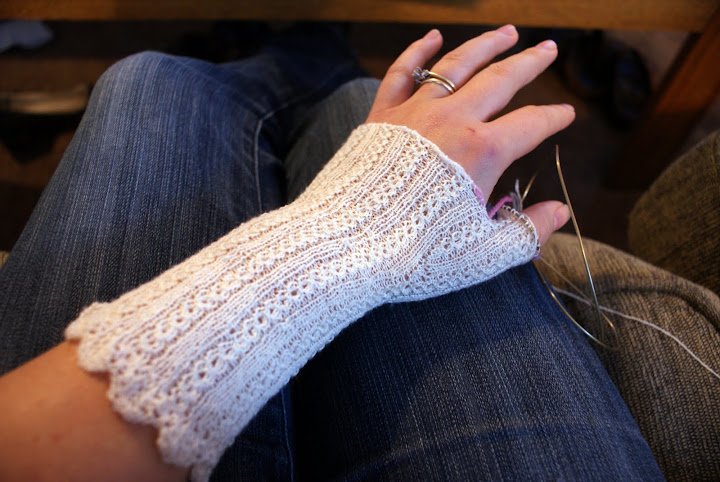 I started these on a whim, because I was in between projects and needed something to do. (Real reason: My character in Dungeons and Dragons made herself some spiderclimb gloves out of magical wool that lets her climb walls and shoot webs all Spiderman-style. I got jealous, so I’m making them IRL.) To be honest, I didn’t think I’d get this far. It’s cobweb lace on size 0s, for goodness sake. But the rule still applies, believe it or not, that when you knit on something, it gets knit. It’s weird that I’m surprised by this, but there we are. 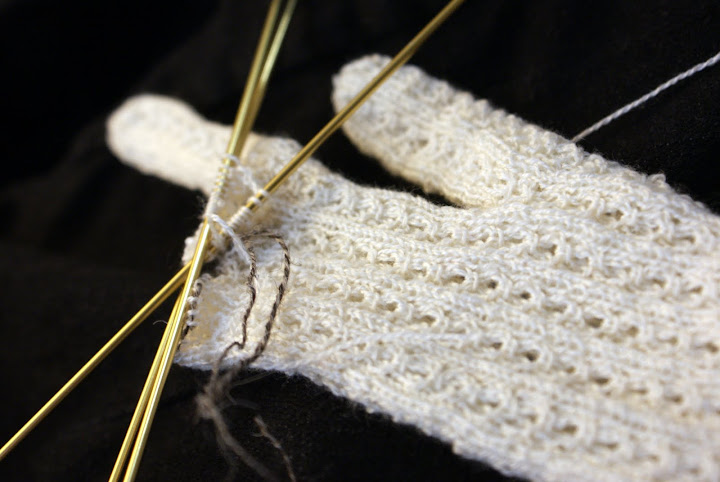 The fingers are pretty tedious, I won’t lie. I switched from magic loop to DPNs because it was taking longer to wedge the (Addi Turbo lace!) needle tips into the tiny stitches than I was saved time by one less needle switch.

To my surprise, I haven’t been getting as many “you are freaking nuts!” comments from this project as I do on the average pair of socks. The responses have been “Ooh pretty!” (understandable) or “those aren’t going to keep you warm.” To which I beg to differ: Counterintuitively, lace can be very warm. As much as wool is a good insulator, air is even better – and lace traps air. So, use these gloves by themselves, and they provide a moderate amount of warmth; pair them with a pair of wool gloves or mittens, and you’ve gained a +3 constitution bonus from sheer manual warmth.

Okay, enough dawdling. It’s getting late, and I’ve only got another hour or so before my cup of decaf wears off and I start thinking that some gibberish theological motto I’ve just come up with is the most insightful thing since simul justus et peccator. Nobody wants that.