I have a new obsession, picked up via Cold Antler Farm. It’s an English documentary called “Victorian Farm.” I don’t really need to explain it; watch the first thirty seconds and you’ll know whether it’s something you don’t care about at all, or which possesses you with an unholy obsession.

The show ends up being a combination of home renovation, historical documentary, diy-show, cooking show, and reality-tv-minus-the-drama. I’ve watched nearly all six episodes in about forty-eight hours, and there are consequences to hearing more words from a TV show than other humans. Like I keep inadvertently talking to people in the accents of the presenters, and while reading a book for catechesis class, I keep hearing the narrator’s voice reading it to me. It’s also put me in an intensely homey mood. So it’s a good thing I have something intensely homey to show you, eh? 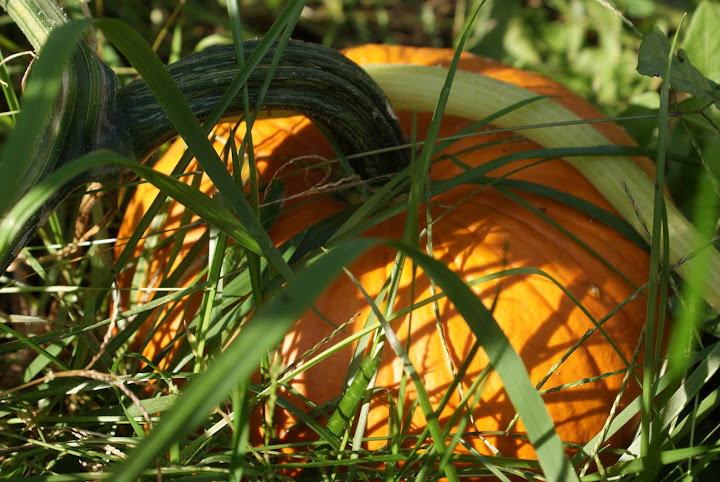 It was much smaller than it looks here, probably less than a foot across, but plenty for a good batch of pumpkin soup. My favorite recipe for such an occasion is out of Martha Stewart’s Good Food Fast; it’s actually a recipe for butternut squash soup, but it worked just fine for pumpkin. It’s super-simple – you fry up the squash with onions, garlic, and ginger, then you boil the whole mess until the squash is cooked. Then you blenderize the whole thing, add orange juice, and voila – deliciousness.

I was proud of how I figured out to deal with the pumpkin – I didn’t think I had time to skin it, so after eviscerating it, I just cut it into crescents and boiled it that way. Then once it was cooked, I sliced the rind off easily before it hit the blender. It was still time-consuming, but it saved me a half-hour wrestling match with a pumpkin and a potato-peeler. 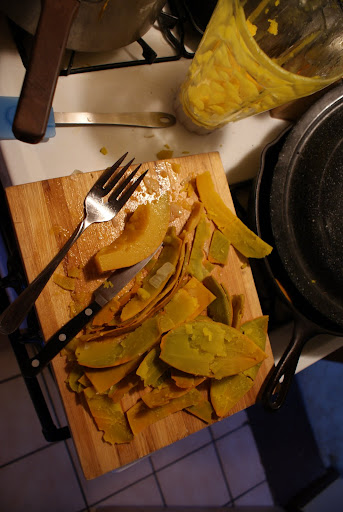 What really makes the recipe is the garnish. You add sour cream, but you also bake up the seeds of said squash with lemon juice, salt, and a good bit of cayenne and chili powder. A pumpkin’s worth of seeds is always way too much to adorn a pumpkin’s worth of soup, so it’s a good thing they make an irrisistible snack. 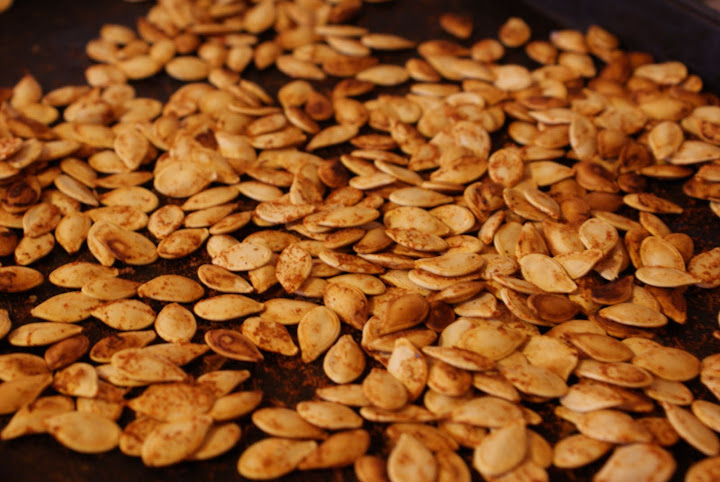 Using pumpkin instead of butternut made a slightly thinner soup, but it was still received to general satisfaction. It was a surprising yellow; I’m not sure if that’s the variety of pumpkin, or if it wasn’t quite ripe yet. 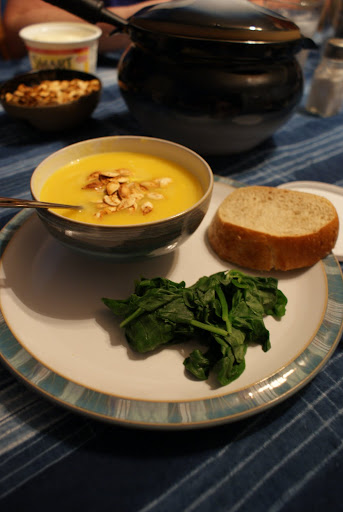 The weather outside is disgusting and rainy, and it’s suddenly in the 40s and 50s, so my domestic bliss is apt to continue at least a few more days. (I even put all my yarn bits away in the basement.) My crescent-cooking method meant I had to use a good bit of extra water, but I just saved the extra broth. Tonight I’m cooking up some barley to throw in it, and hopefully such a concoction will help fight off the oncoming cold induced by this weather change. Alongside some yellow squash from the garden, sauteed in olive oil spiced with basil flowers, it seems like an idyllic rainy-day meal.

I think this might be the first time any gardening in which I was heavily involved ever came to anything.