Fall is here, and I am more or less in denial. September is nearly over, the first pumpkin in our patch is ripe, and September’s socks are actually finished. 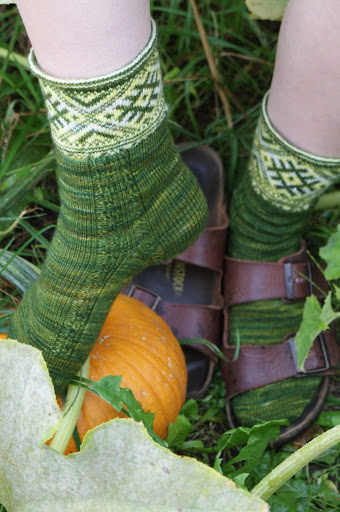 Pattern review: The gauges in Folk Socks are weird. I keep encountering it; I keep blogging about it. So why do I keep believing the patterns? These “Estonian Socks” called for a ridiculous number of stitches to cast on, in the 90’s, and asked me to knit them on size 0s. For most patterns I would have scoffed at such an idea and reworked the pattern to 64 stitches on US2s. But the fair isle patter only has three repeats, so I would have had to alter the pattern or go down to 2 repeats. So I decided to at least try. I found some 32″ 0s for magic loop, and knit really tightly, skeptical I could ever get down to gauge.

Then a funny thing happened, which I didn’t notice until I was most of the way down the first leg: my gauge was now tighter than recommended. Downside: I was now committed to knit a whole pair of socks with a carpal-tunnel-inducing tightness, for no discernable purpose. Upside: The fair isle bit is so tight that it doesn’t go very high on my leg, so I can make the socks shorter.

Overall, the pattern is beautiful. I love the fair isle (doesn’t it look like the Eye of Sauron in some kind of Navaho weaving pattern?), and the clock patterns with twisted stitches. There’s another funny feature: there are no gusset decreases. This probably only worked because there are so many stitches, and it required a heel turn that ended with only 8 stitches left. I had to get creative to try it, since I always pick up too many gusset stitches, but it worked. It’s just… weird. 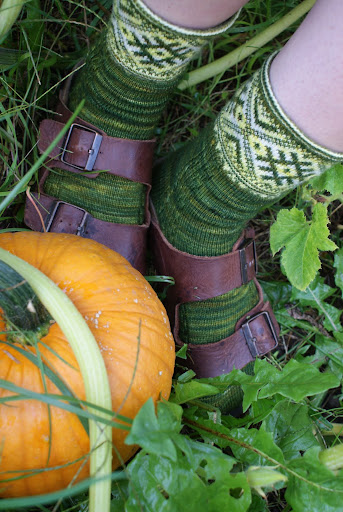 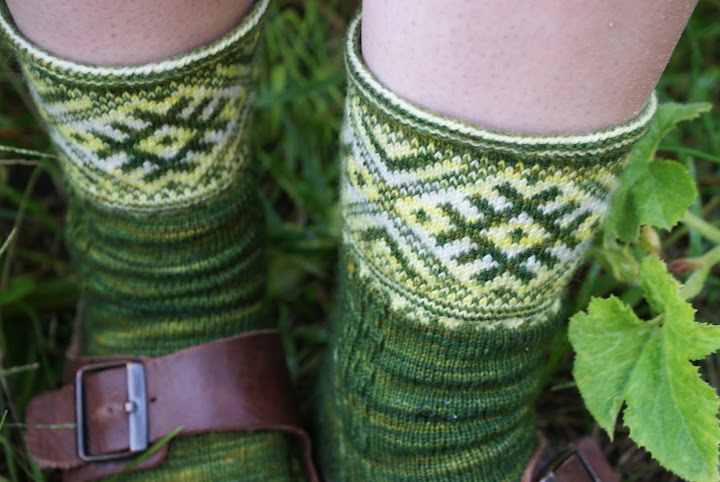 These socks are a little small on me, so they will go in the gift box. Today I will pull the big box of sweaters out of the garage to fight off the nip in the air. Sometime this week, that pumpkin will be eviscerated and turned into delicious soup. And sometime in the next month, I will admit that the summer is ending.

One thought on “September”