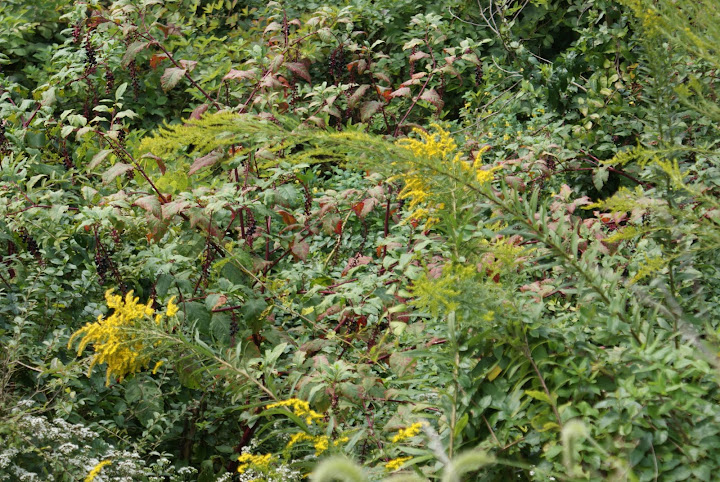 This time last year, I was becoming known on campus as “the pokeberry lady,” as I skipped homework to traipse around beaver county looking for those lovable black berries. It was exciting – I had just bought a freezer, and that was the first year I was going to be sure to pick enough for intense production. A few magnificent locations gave me way more than I thought, in less time, so the whole escapade went very quickly.

Right now, in all honesty, I hate pokeberries.

I think, because it was easier than I thought to get 100 lbs of pokeberries last year, I thought it would be just as easy this year. That ever-so-false expectation, combined with a diminished will (designing has really taken over my creative brainspace right now – but one needs yarn to design with), has combined for some serious misery.

To start with, all the awesome spots I visited last year were just not as awesome this time. I’m not sure if I was too late, or if last year’s harvest hurt this year’s plants, or the weather has made a bad season for weeds, or if we’ve suddenly been overrun by flocks of pokeberry-eating seagulls, but plants that should be enormous and full of ripe berries are smaller and seriously picked over. This has meant  I’ve had to take my time and be thorough get all the berries I can get.

Leading to the second problem: Pokeweed likes to become BFFs with plants that are spikey, scratchy, and poisonous. Outing 1 ruined a perfectly good tank top after a major jaggerbush attack (“jaggerbush” = pittsburghese for “plant with thorns”). On the drive home from outing 2, I was crying to myself as I pulled enormous burrs out of my hair – I know it’s not safe to drive and pick burrs from one’s hair at the same time, but I couldn’t stop because the sensation of burrs in my hair was just too weird. Now, after outing 3, I’ve discovered that I was quite wrong about what poison sumac looked like.

I finally got a good 30-lb pick in a new spot today, despite having to pick in dreary rain from hurricane-whichever-this-is. I would have gotten more, had I not realized that if I got any wetter, I would contract a cold from thin air. Then I stepped in dog poo just before getting in the car. Sigh. I probably have a week or two left in the season, and I’d really like to get at least another 25 lbs. I’m not sure I have the willpower.

I’ve learned my lesson: all this naturey stuff isn’t all sunshine and high ideals; it’s a commitment. And I hope you’ve learned your lesson too, that “in all honesty” is a fabulous excuse for a festival of whining. (Yes, I would like some cheese. I love cheese!)

One thought on “Wah.”