Several years ago, when I was in the most nascent stages of my knitting obsession, my mum bought me one of those pattern-a-day knitting calendars.

The year was 2005. By my foggy understanding of history, acquired mostly by osmosis and wikipedia, that year was toward the end of the novelty-yarn craze that did so much to revitalize knitting as a hobby and an industry. (I wouldn’t know; back then I was still doggedly knitting with red-heart super-saver and other things you can find on sale at JoAnn’s.) Yarn store owners speak of those days with an odd light in their eyes… Those were the days that half their store was filled with novelty yarn, and the place was packed every Saturday with women who wanted nothing more in the world than to spend 50$ on hairy yarn with slubs and sparkles to make a scarf that would look like an inside-out colon. Beginning knitting classes were packed; employees were casting on and teaching the knit stitch on the fly because everyone was so excited and obsessed. And everything sparkled, or had multiple textures, or had the word “eyelash” in it.

Many of those new knitters made a few scarves, then moved on with their lives. But many more have stuck around and become the force of nature that is today’s knitting subculture. They graduated from those horrible scarves into sweaters, socks, and semi-solids, many even learning to spin. For that reason, veteran knitters have a healthy respect for novelty yarn. Even though I wouldn’t be caught dead knitting most of it, and I have to resist sticking my finger down my throat every time someone asks me for eyelash, I know what those yarns did for my craft, and I respect them. From a distance.

Sadly, this also means that about half of the patterns in my 2005 calendar are useless to me.

As soon as the year was done, I pulled out all the patterns and organized them by type: sweaters in the front, then scarves and other neckwear, mittens & gloves, hats, etc. (I’m that sort of person. I like fastidious organization in very small areas, in which I have some hope of control. This is why our DVD collection is alphabetized, and my phone contacts are sorted by last name. I have no hope of ever having a holistically clean house, so I get my tidiness jollies in small, obsessive portions.) Sorting them that way, I’ve found that calendar very useful. My first sock pattern was in there: a toe-up sock with a short-row toe (very cool). I’ve come up with several little gifts when I couldn’t find the right pattern anywhere else. Of course, this is all before ravelry made finding patterns as easy as learning how to use a search function.

One pattern from that calendar always stuck with me: a little lace bookmark. It was the very first pattern in the calendar, and me being the little OCD late teen that I was, I had a proclivity for making lists of accomplishments and imagined that if i was focused enough, I could complete them. (Ask me about what I did with my book collection sometime. It involved a spreadsheet.) So I spent a lot of time staring at that bookmark pattern, imagining myself doing it, even though I’d never done lace in my life. I got over this, eventually, but the other day I had a letter to send to a nice person who’s making it possible for me to continue in school, and I wanted to include a little gift. I immediately thought of the bookmark, though it’s a little early to think about snow. A few episodes of Glee later, that old roadblock between me and obsessive list accomplishment is complete. 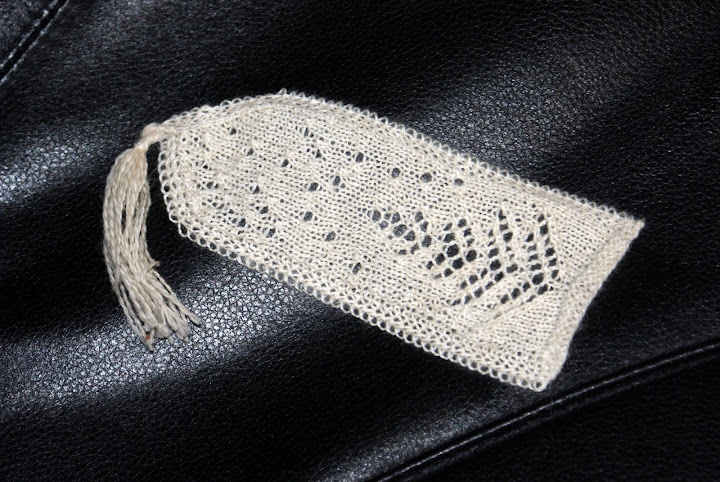 A word to the wise if you’re actually thinking about buying one of these calendars: They make new ones every year, and every year loads of small and independent designers submit their designs to be included. Because so many patterns are required, loads of people have the opportunity to get published that would otherwise never be heard of. (Again, this was more relevant before ravelry flattened the earth in that regard.) But this also means that many of the pictures are sucky; my bookmark frankly looks better than the one in the pattern. The patterns are hit-and-miss, and they are short. But, sort through them all at the end of the year, and you’ve got a book of patterns by topic. You’ve also learned about hundreds of small-scale designers, a few of whom you are bound to like enough to support with more patronage.

Fads come and go. The novelty yarn craze was replaced by the sock craze, during which everyone wanted sock yarn with as many colors in a skein as possible. This is dying down a bit, though I still love me some wild multis. But I can’t help but wonder – what will be the next bit of ridiculous to take our craft by the jugular for years at a time? Lace knitting of little shawls, especially with semi-solid fingering weight yarns, has been very hot for a while. Vogue keeps trying (and failing) every year to bring super-bulkys back. What’s next? Let’s start a trend.

One thought on “Nostalgia”