The first fiber I ever spun was Wensleydale.

The story starts a few days before Christmas, 2008. Jared & I, being the token young couple at St. Timothy’s Church, were asked to be Mary and Joseph in a living nativity sort of event. A few people connected with the church who owned farm-y sort of pets brought them to be part of the scene, which is how I ended up hanging out with Fable, the llama. I don’t really remember the chain of events, but somehow I ended up with a nasty llama fleece and no idea how to spin. Mom knew something about drop spindling, so I acquired a cheap drop spindle and expensive hand carders, and we watched you tube videos, desperately trying to spin the stuff and not getting very far.

By May, we’d about had it. (The llama fleece ended up going the way of all flesh, by the by.) So when Sheep & Wool rolled around, we decided to go looking for something a little more fun with which to learn. That was the year in which it poured rain continuously all weekend. It still provided complete sensory overload, as the fest always does, but somehow, out of everything I saw, what caught my eye was this braid of Wensleydale roving (scroll down to see). It had delightful peachy colors and an unusual sheen, almost silk-like. Spinning it involved a good deal of argument. I found out later that Wensleydale wool is particularly long-stapled, meaning that the individual hairs are really long. Beginners should start on something with a medium-length staple, like Bluefaced Leicester or Corriedale. Short fibers (like Merino) tend to fly out your hands, and long fibers (like Wensleydale) you have to fight with to draft. But I was pretty proud of the goofy art yarn I produced, and the following Sheep & Wool festival, when I went a little crazy with the purchasing, I made sure to find that same booth again and acquire another braid as close in color as possible.

It finally made it onto my spindle during Lent. Still trying to work my way up to spinning a little thicker, I purposely went thick and thin, going for singles that might at least kinda match what I had made before. 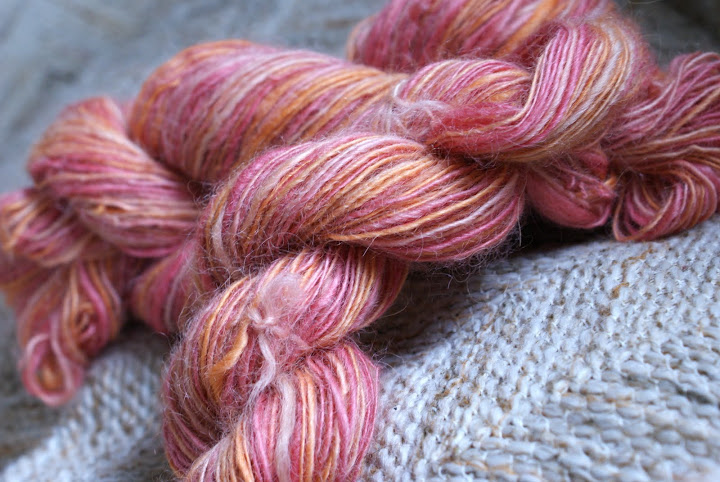 The result is fun, if still a little fine. 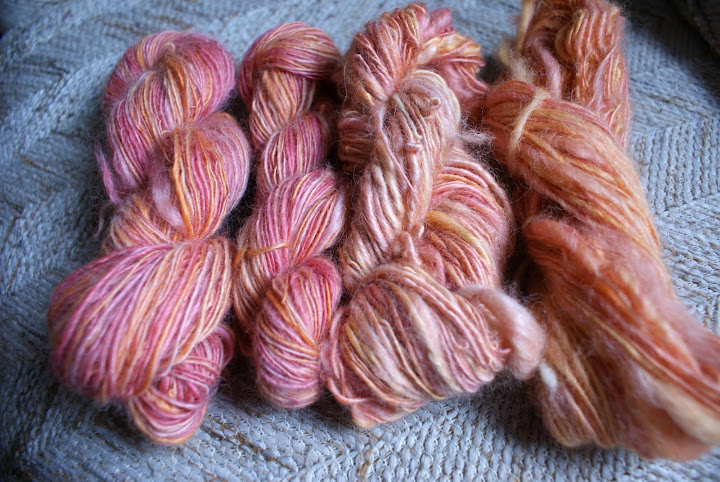 I guess I shouldn’t be surprised at what a difference a couple years can make. I haven’t spun a ton in that time, and almost none on the drop spindle, but dang. I don’t even know I got the first yarn (on the right, of course) that thick!

They are fun together. I imagine making a scribbling stole, like the one mom did, because funky yarn always makes me think of those things. I could either use the new yarn as the fine scribble and the original yarn as the thick, or I could get some white kidsilk haze for contrast to be the fine color, then use the fine handspun for most of the scarf and the thick stuff on the ends. *shrug.* It’s fun to think about.

Three times makes a tradition, they say – this year I went back to Flying Fibers and got a different color…. just to say I did. What can I say? We have a history. 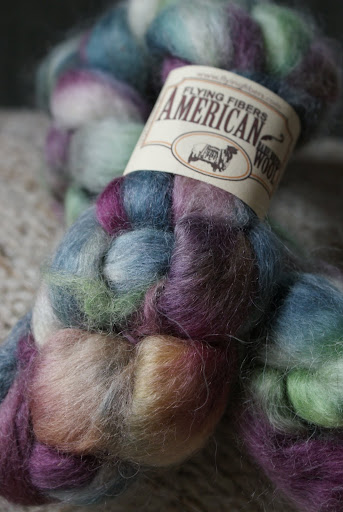