This post is part of a spin-along through 51 Yarns by Jacey Boggs Faulkner, in the Wool n’ Spinning community. For other posts in this series, check here.

This spin starts as a box of greasy old batts. 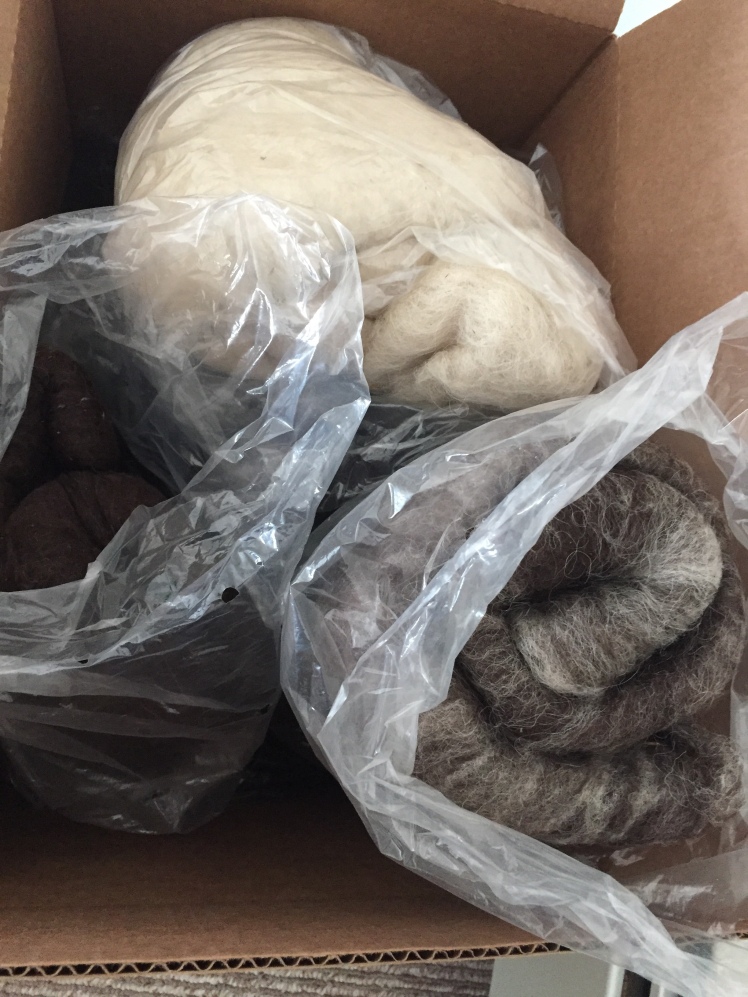 These have sat in different closets of mine for lo these eight years. Can I dig up the post where I talked about carding them? No, I can’t. But here’s the post where I talked about how I washed fleeces back then. I did that to this fleece, which is an Icelandic from Breezy Willow Farm. Well, it did not work. Do not do as I did. My guess is I took the suint (sheep sweat) out of it, but not the lanolin, and not much of the dirt either. But since I had gone through the steps, and did not want to work on it anymore, I believed it was clean, and carded it up. I had just moved, but the farm I was doing all this for let me borrow their drum carder, so I could finish carding up some fleece for them and also card up the Icelandic, which they let me keep. That poor drum carder. I hope it recovered from all the grease I put it through.

So much for the past. I ended up with about 1 lb of batts: several black, one and a half white, and one grey from the bits I couldn’t separate. Of course I carded both coats together.

For this study, I ripped about 1.3 oz off one of the black batts, and spun it up on my lowest ratio – 4.5:1, since I now have a bulky flyer. It was rather a nasty experience. Old lanolin is not very nice, especially when mixed together with bits of VM. There were nepps as well, since I was a novice carder on top of the rest.

I managed to make a skein of low twist singles out of it. Blegh. It made me realize, it is OK to throw out these old batts. I do not have to give my time or closet space to them. They has given me joy in thinking about them, and maybe that is enough.

I washed that skein really well, using methods I have since learned for washing fleece properly. I’m out of Unicorn already (sniff!) but some blurbs from Beth Smith in the “Power” issue of PLY magazine filled in the missing info on how to wash with Dawn. Six half-hour soaks, all in nearly-boiling water (some from my hot-pot, a little from my tap). The first two baths I made blue and slippery with tons of Dawn; the rest were rinses. The first bath went from blue to green due to all the grease. Gross. 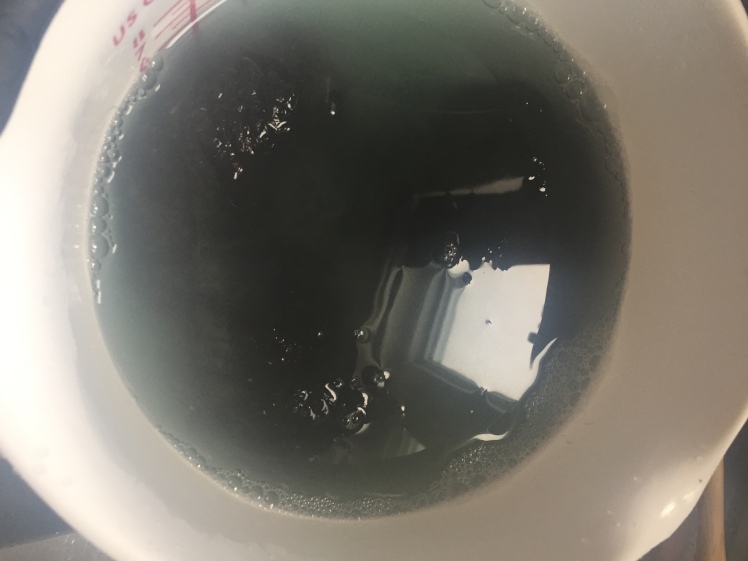 I finished with a fulling: a couple plunges between very hot tap water and ice cold water.

Beth Smith’s note included the helpful fact that you will not felt your skein if, when transferring it from one bath to another, you always put it into hotter water. Hotter water just causes the scales to open up more. Putting it suddenly into colder water is what makes the scales shrink. Indeed, in washing fleece, the key is not to let the water get too cold before you transfer it, because the lanolin will reattach to the wool.

So I knew my wash wouldn’t felt it, and I wanted to full it a bit because of something I read in the “Spinning in the Grease” chapter of 51 Yarns. Should maybe have read that before I started, but there you go. Jacey noted that you might want to put extra twist into a yarn spun in the grease, because a decent percentage of the wool is not wool and will go away when you wash it. I did not do this, which is why I wanted the extra strength from fulling.

The transformation in washing was incredible. It went from a skein that grossed me out to touch to one I could wear around my neck. 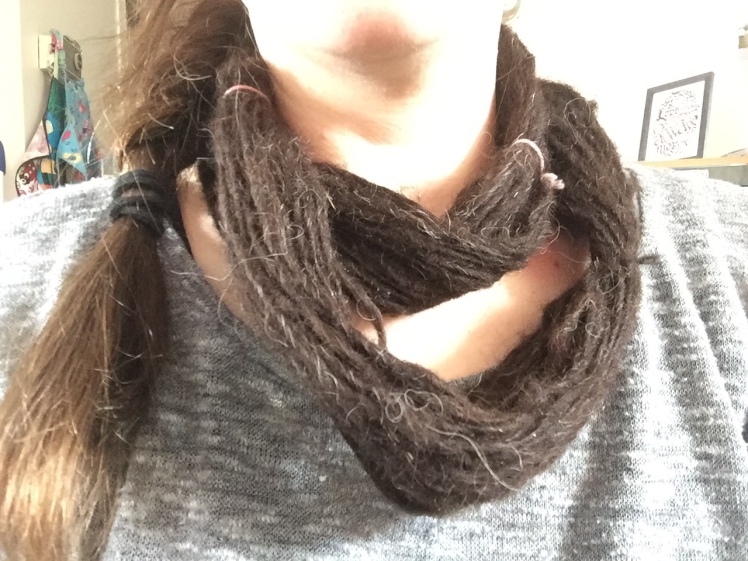 Pretty nice eh? Really clean at last, very fluffy and lofty. Sticky only in that it properly fulled, but didn’t felt. Not what I would call beautiful; it reminded my of my own scraggly ponytail.

The surprising thing to me about working with Icelandic is how lofty it wants to be. The Thel is disorganized and pushes out, holding plenty of air. The Tog is wirey, adding strength, but its unruly curves also give structure to the airiness. So it’s not as divinely squooshy as the Thel-only yarn was, but it holds the shape you give it.

I still felt free to throw away the rest of the wool if I wanted. My sample yarn was thick and thin, due to my lack of control over the greasy batt. I did find toward the end that I had more influcence and consistency if I folded the batt in half and spun it short forward over the fold, as it were. But still, I’d have to really like the fabric it made to go through the ick of spinning the whole pound of it. 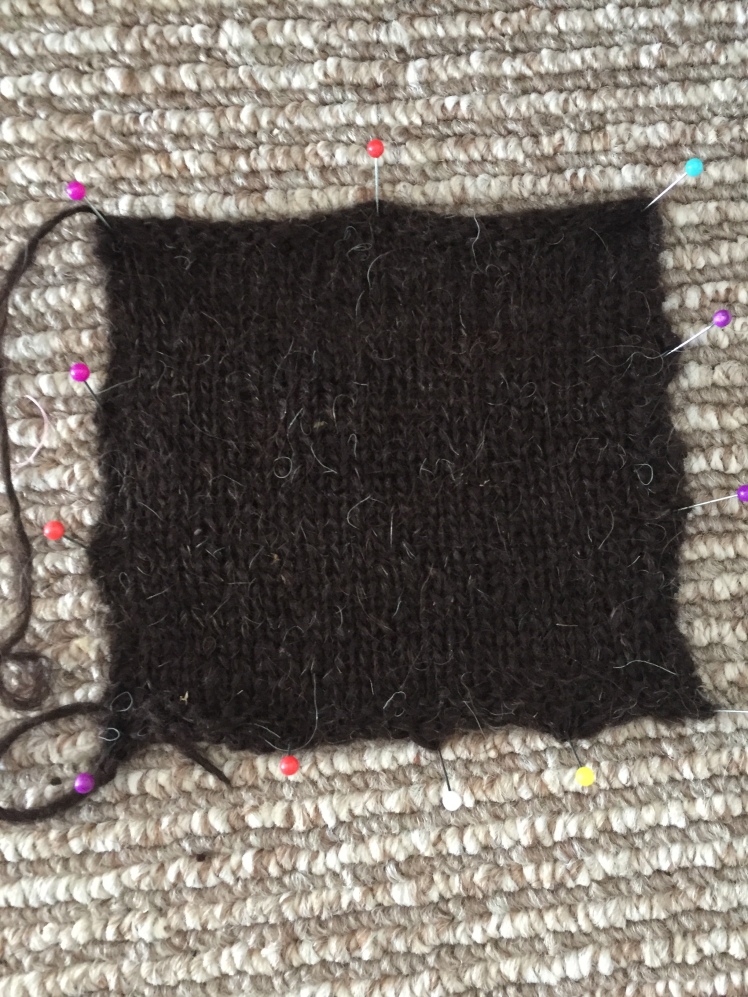 Blast. Wouldn’t you know, I really like the fabric. I skipped the pleasantries and knit it down on US 4s. Even though the yarn is inconsistent, the surface looks very even, at least much more even than I thought it would. You can only see the inconsistencies when you hold it up to the light or look at the purl side. My dreams of a short-sleeved lopapeysa reappeared with force. 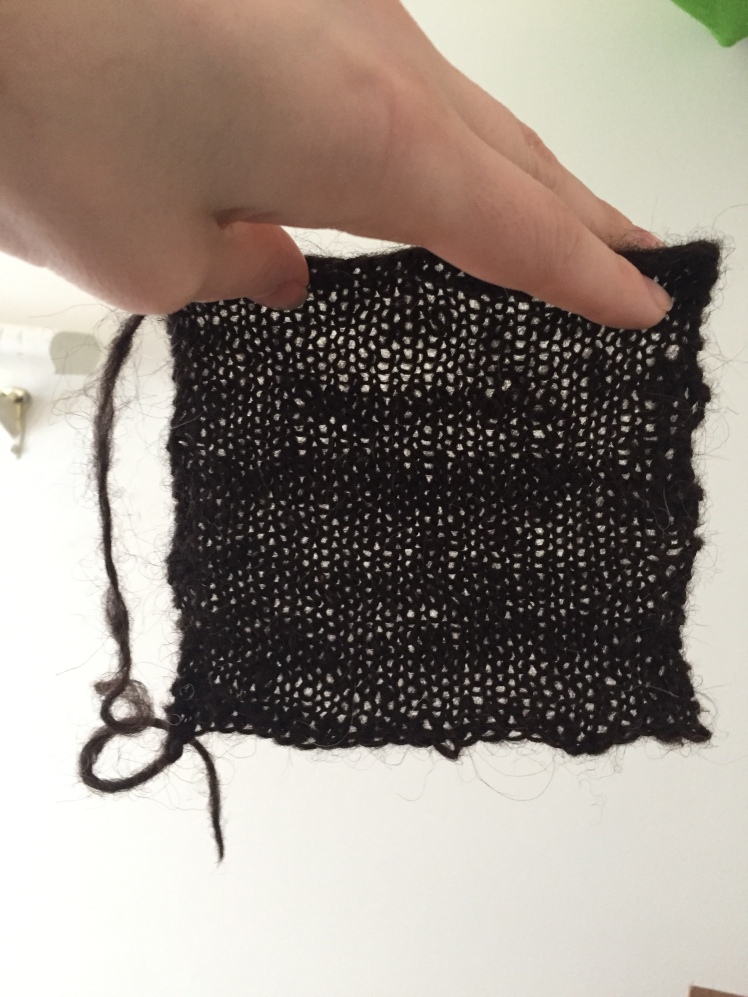 The good news is, it spun up very quickly. Since they’re thick singles, I should be able to spin up the lot in 12-16 hours, which is less time than it would take me to spin 4 oz for socks. Hubby is going on a fishing trip this week. Maybe I’ll start it while he’s gone. One thing’s for sure: these batts are not going into another closet. Next stop will be yarn or compost.

It was excellent to spend a longer time with this unusual wool. Its loft and strength make it useful as a singles yarn, but I’m sure there are many more possibilities for it and the other dual coated breeds.