This post is part of a spin-along through 51 Yarns by Jacey Boggs Faulkner, in the Wool n’ Spinning community. For other posts in this series, check here.

I learned about Down wool a couple of years ago, soon after I started following Rachel. Since then I have read the special issue of PLY magazine covering Down and Down-like breeds, and the chapter in Beth Smith’s book, The Spinner’s Book of Fleece. But this was to be the first time I got my hands on some Down wool for myself. 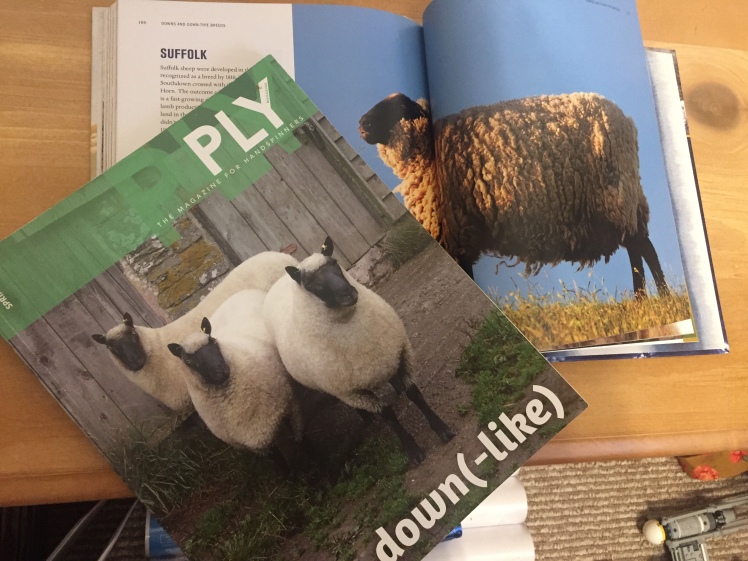 I turned to my friend Kelly, whom I met through Rachel’s Slack channel. She lives in Alberta, and she runs a small business called Dominion Fleece and Fibre, sourcing raw wool to Canadians. There aren’t many ways for Canadians to source raw wool by mail order. Wool can’t cross the border into Canada without being washed, so we can’t order it online from shops abroad. So Kelly drives around to sheep farms within a few hours of her home, selects choice fleeces, and offers them on her website.

Kelly sent me a generous selection of Suffolk, North Country Cheviot, and Icelandic (which I’ll use next month). For this sample I used some of the Suffolk; here it is pre-wash.

This lock was pretty average. I just pulled out a washed lock to check, and after washing typical length was 2.5-3″.

After reading so much about that blocky lock structure, it was magical to handle it in person. Who knew sorting locks could be so fun! It’s a slow process, but makes all the rest of it go smoothly. It was essential to weed out the second cuts early.

Kelly also sold me some Unicorn Beyond Clean. I was so excited to have my first experience cleaning raw fleece with Unicorn product, and it was so satisfying. Doing the washing in small amounts was so easy; I just used big pots, hot tap water, and a little boiling water from my hot pot, and attended it to it a little every hour or so. One afternoon took care of all three breeds.

That nasty water made me so happy!

I didn’t know how I was going to make myself start carding; after my last experience I was concerned it would take forever. (Them again, that was 1.5 lbs.) But the next week, a friend showed some interest in my piles of fluff, and wanted to see what carding was like. By the time I’d given her a little demonstration, I realized I was 1/3 of the way done with what I needed for the sample. So I knocked it out that afternoon. About an hour of carding got me this far. I didn’t see any reason to card more than I needed for this sample. I was careful to card slowly, but still got some neps.

And there it sat in an unused colander for several weeks. Between Ns birthday and sewing and being too tired to do anything but knit, it just sat. Last week I finally had enough breaks in sewing, and enough energy, to give it the four or so hours it needed to become yarn. 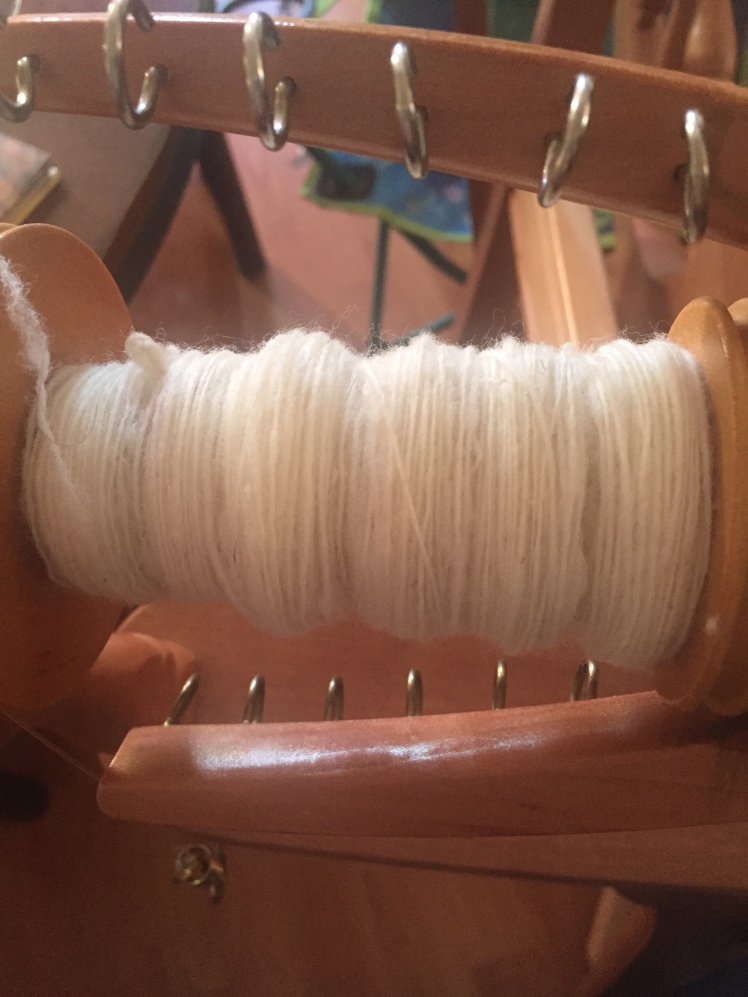 I wanted long draw, but knew I was over a year out of practice, so I went with my default of a supported long draw. 12 treadles at 15:1 from oriface to my hand all the way back made lovely softly spun singles. 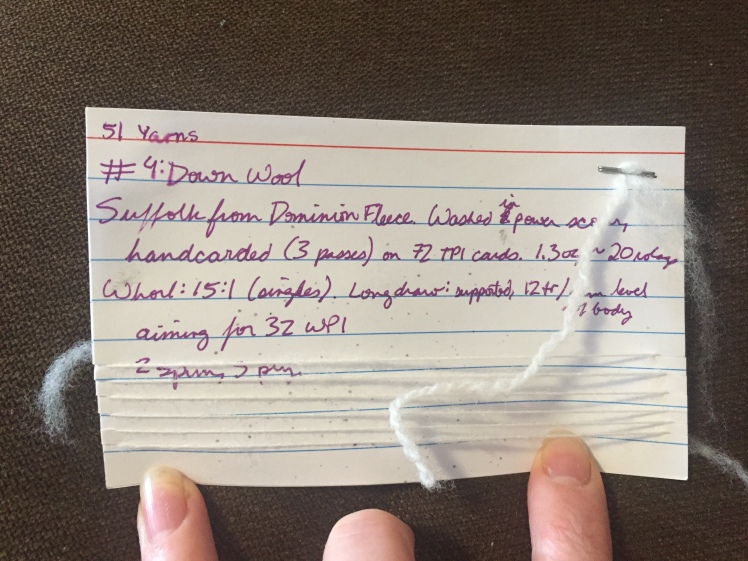 I confess to not checking my plyback test very much. It was so inconsistent that I referred to my sample card rarely, but it probably still helped that it was there.

VM fell out at every step of the process: sorting, washing, sorting again, carding, spinning, plying. In the end there was still a bit left while I was knitting, but not more than in some commercial woolen spun yarns I have used (im thinking of Brooklyn Tweed Shelter). The only point at which it was annoying was in spinning the singles. Maybe I can do more to shake more out in the carding.

I stuck with my pattern of making a traditional 3-ply, so I can compare them all later. Partly to compensate for the light twist, I cranked up the ply twist. After finishing, it had a 50 degree twist angle. 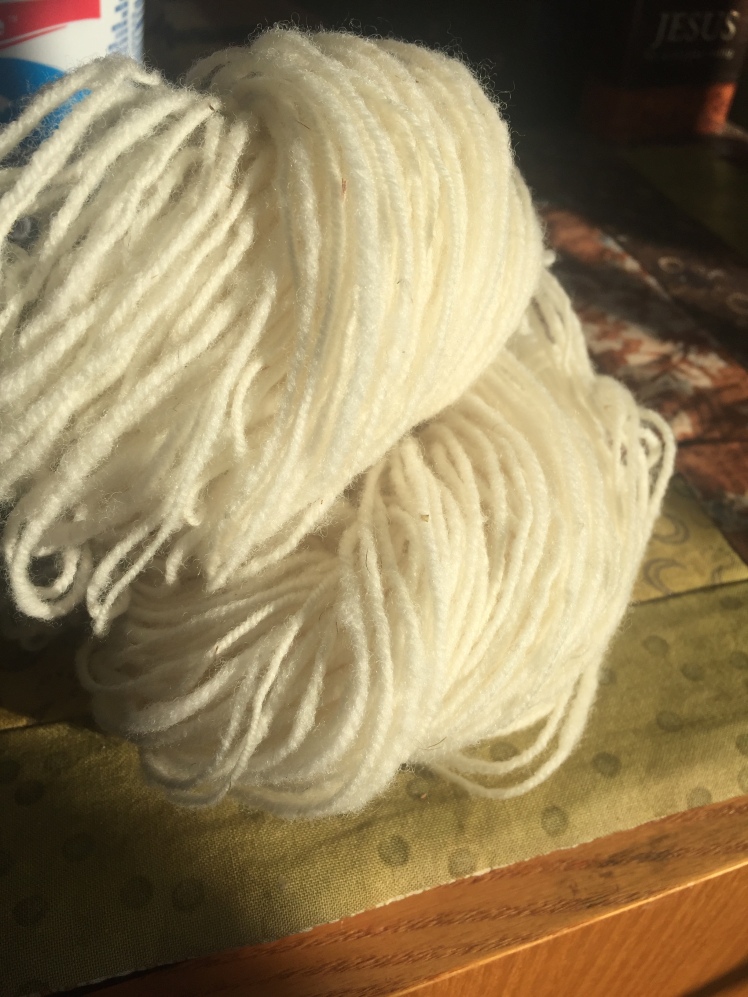 Oh my, the squish!!! This yarn is so elastic and bouncy. Woolen spinning and prep + disorganized high crimp + 3 plies = maximum squoosh factor. It was a delight to knit some up last night. 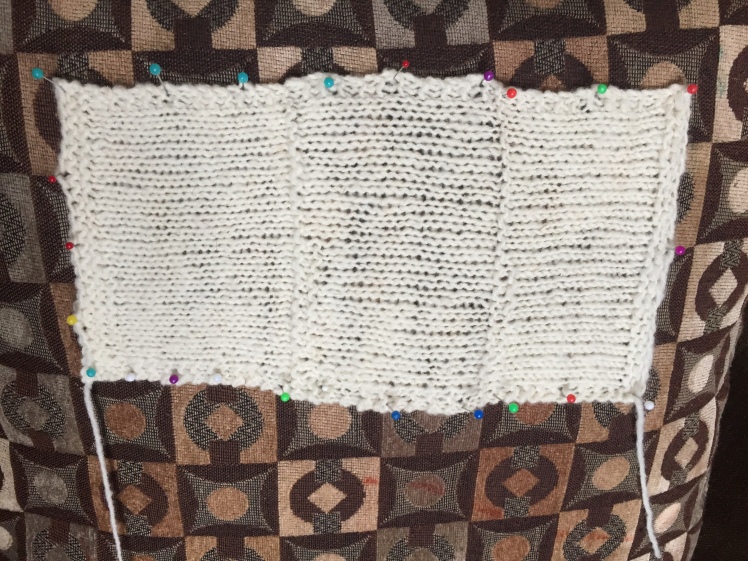 Here you can see the adaptability of woolen-spun yarn. Knitting it up on US 7s, 8s, then 6s (bottom to top), they all filled in nicely after a gentle blocking. I could have knit down to 5s or 4s even without it being unpleasant. I would want to swatch that for a sweater, and test for abrasion. The short staple and woolen spinning is sometimes a blessing in disguise; it wears and pills quickly but then the pills pull off and the fabric stays whole. This already has a cozy fuzz to it.

And perhaps it goes without saying, but I’m awfully pleased with how relatively evenly it knit up, given how inconsistent the yarn was. The news made for some lumpy spots, but it’s not not zany-looking. 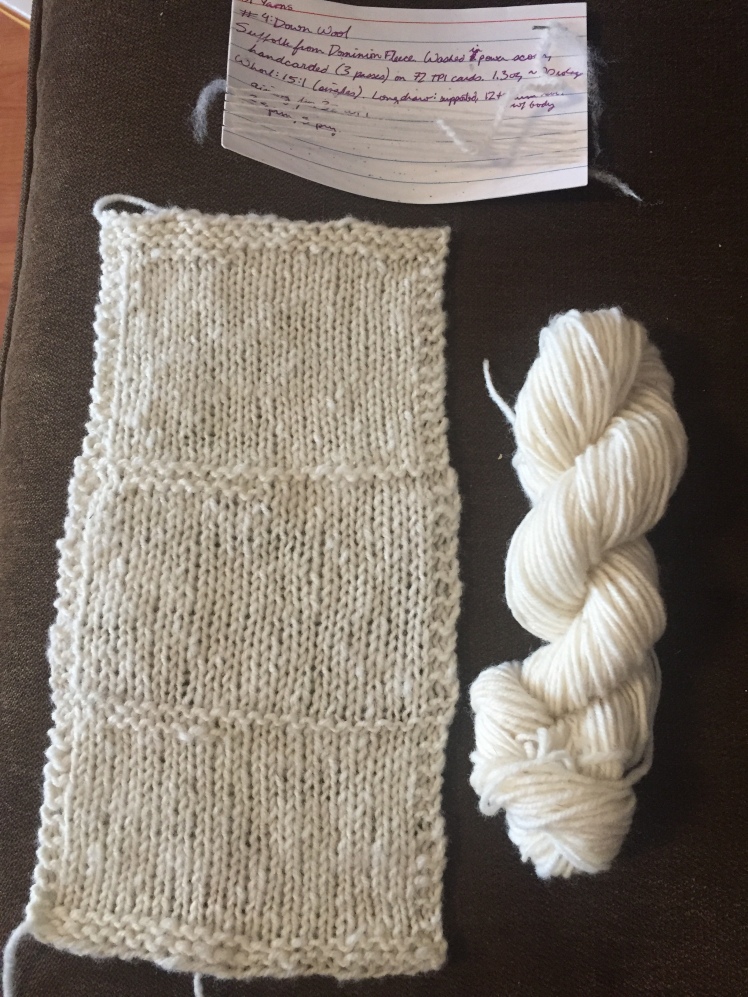 I can definitely see why Downs are a favorite of some of my spinning friends. Squooshy yarn is so pleasing. A stress ball I made myself.