Have you ever noticed that big projects tend to wrap up around the same time? In that vein, I finished a sweater last week. 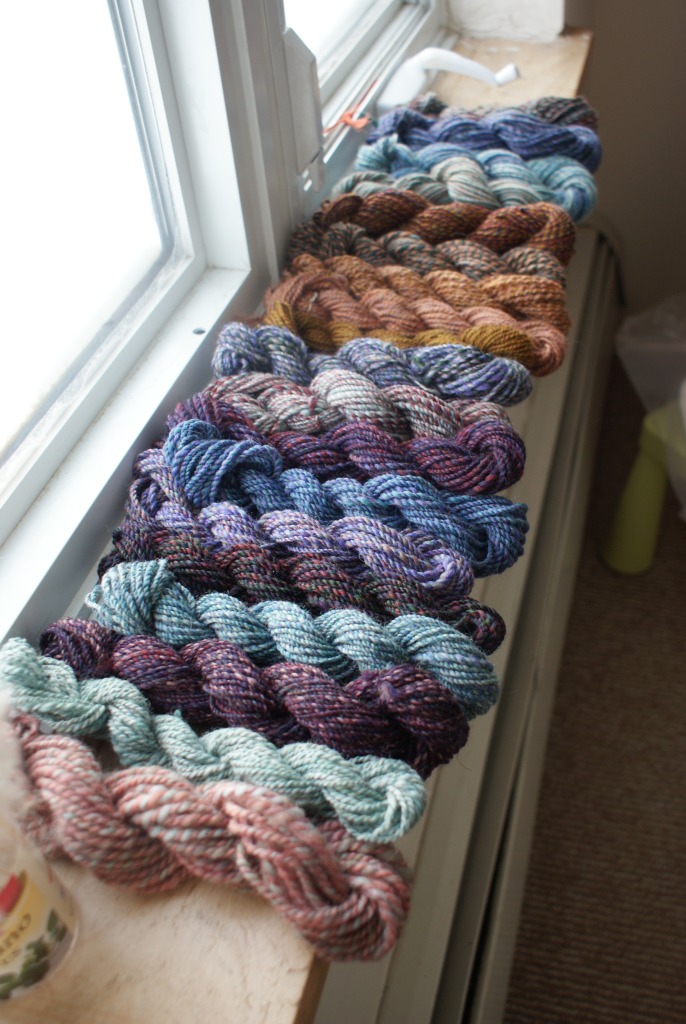 Remember the Blendlings? My blazing re-entry into the spinning world in January and February of this year? (First post here, last post here) These wee skeins mean a lot to me, hand and heart, and they deserved to be used.

This was a leisurely project. It seems odd to me now, in my present state of urgency and indecision, but this was a project where I took my time, followed my gut, and persisted until I got it right.

My basic plan was to make Elizabeth Zimmerman’s “Scandinavian Ski Sweater” from a very early issue of Wool Gatherings. I was inspired by this sample sweater from The Opinionated Knitter, a book which fills me with nostalgia for a mid-century midwest I never remotely knew:

I considered my contrast yarn very carefully. I went with Imperial Stock Ranch Columbia 2-ply, because it was one of a very few 2-ply worsted yarns I could find. It’s woolen spun, so it’s a lot lighter than the dense worsted-spun Blendlings, but in the end that meant the sweater is a lot lighter than it could have been, and it was very adaptable to the varying gauges.

I knit a swatch in which I measured each yard used in different rows of fair isle, so I could estimate the yardage of a given band of stitch patterning, and choose a Blendling with sufficient yardage. These estimates were very successful.

It traveled with me at first- even to the dentist.

I kept hearing that the best way to learn from your handspun is to use it – in my case, to knit with it. Boy was that true.

The Blendlings are all 2-ply, some kind of nondescript British wool (likely BFL), and somewhere in the remote vicinity of worsted weight, but that’s about all they have in common. Some were underspun and overplied; some looked dull but were soft and balanced; some were tightly spun and plied into a plump, colorful rope. Some were noticeably thicker than the contrast yarn; others were so thin that I had to double them. I got to see them all knit up, and how they each acted in a fair isle pattern with woolen-spun yarn.

The long and the short of it is that handspun is very forgiving. My least favorites were the ones that were so ropey that the stitches looked like jagged teeth, or so underspun and overplied that you could see a visible lean in the band of patterning (see the sage green S pattern below). But honestly, both of these came out fine in the wash. Colorwise, I learned that the yarns with the highest amount of color contrast within themselves (see the Xs below, and the flowers below that) were the most ungraceful in a fair isle pattern. But these complaints were exceptions. Overall, I was happy with how the yarns performed, independently and together.

Now, the really great thing about Elizabeth Zimmermann is that she encourages the knitter to be an independent thinker. She gently chides those who ask for very specific directions by addressing them to “mindless followers.” I was looking forward to trying one of her sweater patterns and embracing the spirit of her work by putting my own spin on it.

However, I overdid it a bit. I got so excited about being an independent, knowledgeable knitter… that after a certain point, I didn’t actually read or follow any of her directions. (So much for my caution of the early stages.)

Apparently, I know none of those things. Hold your breath, then look below at the horrible tragedy that was the initial steeking attempt.

I have steeked before, but apparently it was so long ago that I quite forgot how to do it. My crochet chains were too loose and too close together, but my really big mistake was that I picked up stitches (thinking to knit the sleeves top-down, since I’m oh-so-independent) right next to the crochet chain. That pulled the short cut floats right through the crochet chain and turned my neat cut into a gaping wound. 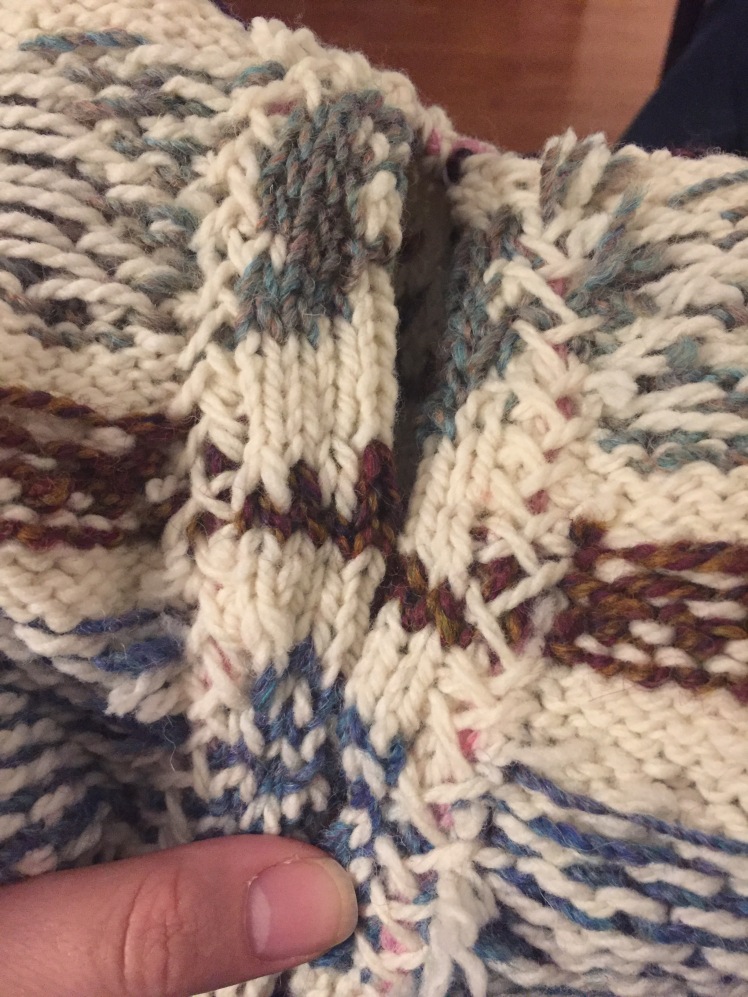 I did recover, but only after hours of delicate work that could have been avoided. EZ, it turns out, sewed down her steeks three times with a sewing machine before taking scissors to her work. Good grief.

The sleeves were… well.

I wanted to knit the sleeves top down, so I could use up the largest amounts of yarn on larger stitch patterns near the top. Fair enough. And I thought, reasonably, that I knew what a sleeve should be shaped like; I have enough sweaters and have knit (and designed!) enough of them myself. Well, first off, I did not have an accurate idea of my row gauge, so I was not decreasing fast enough. Second, I know how a sleeve is shaped on a fitted sweater… but this is a bag sweater. My mom is a bag-sweater master, so I grew up in and around the things, but it never occurred to me: I have never made a bag sweater before. In a bag sweater, the top of the sleeve has to be enormous to be comfortable.

As a result, after two weeks of careful two-at-a-time work, I had two perfectly matched sleeves which squeezed awkwardly on my upper arm, and flapped stupidly around the wrist, while bunching up from being four inches too long.

I took my medicine. I ripped one out entirely (except for the cuff, which I had forcibly decreased down to the correct size), and followed directions this time, knitting from the bottom up. Increasing every four rows still sounded drastic, but I complied, and barely came up to the correct number of stitches at the top! What do I know, indeed. 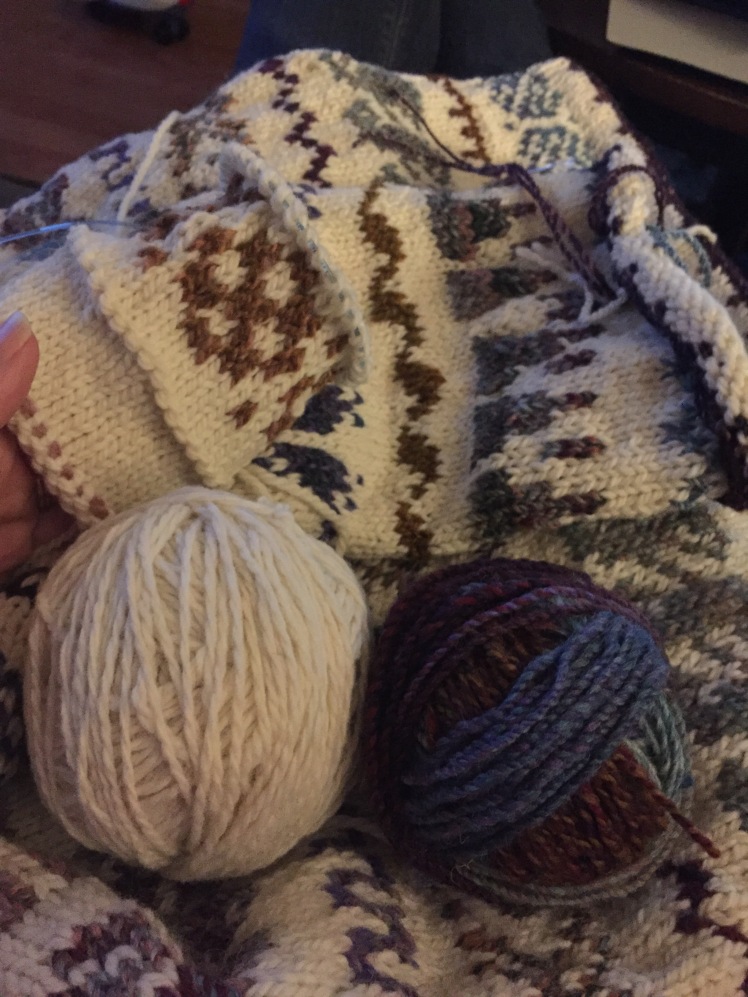 It went very quickly, though. It turns out knitting one sleeve goes much faster than knitting two. I left the other sleeve intact while I was knitting the first over again, and used it as a pattern. It helped a great deal that I had already made my decisions about what patterns and colors to use, and so wasn’t stopping every half-dozen rows to dig through my bag of Blendlings and leaf through the pattern book. 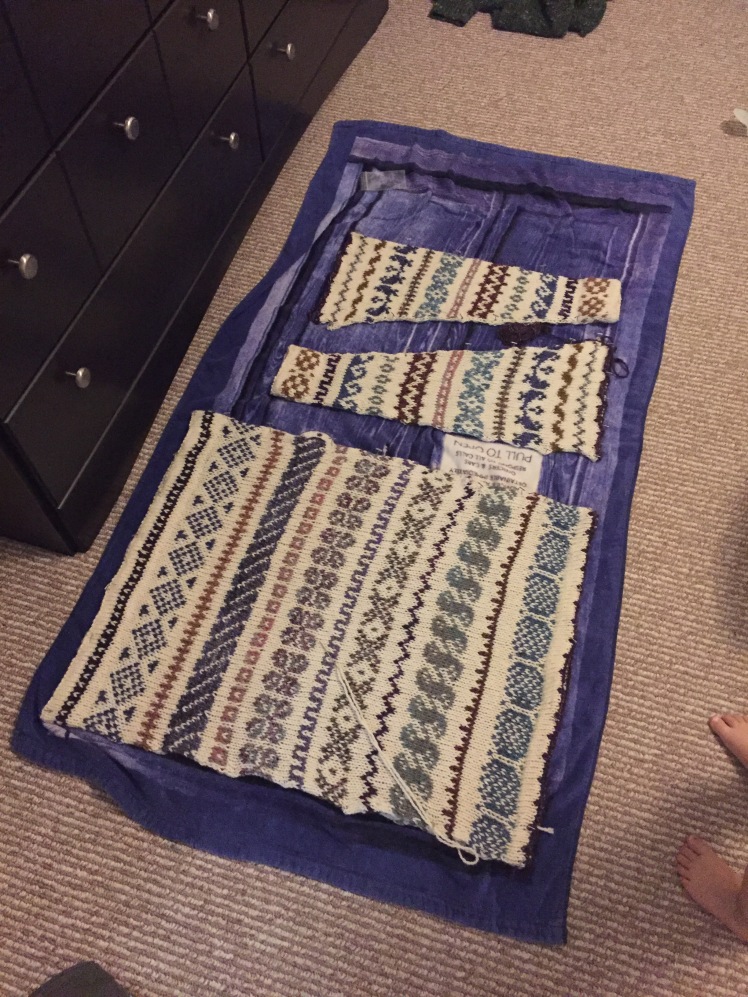 The second sleeve was re-knit in a trice. A hearty blocking evened everything out, though it took a full four days to dry through all those layers. I had to deepen the steeks for the wider sleeves, but a couple evenings of careful work had it all put together. 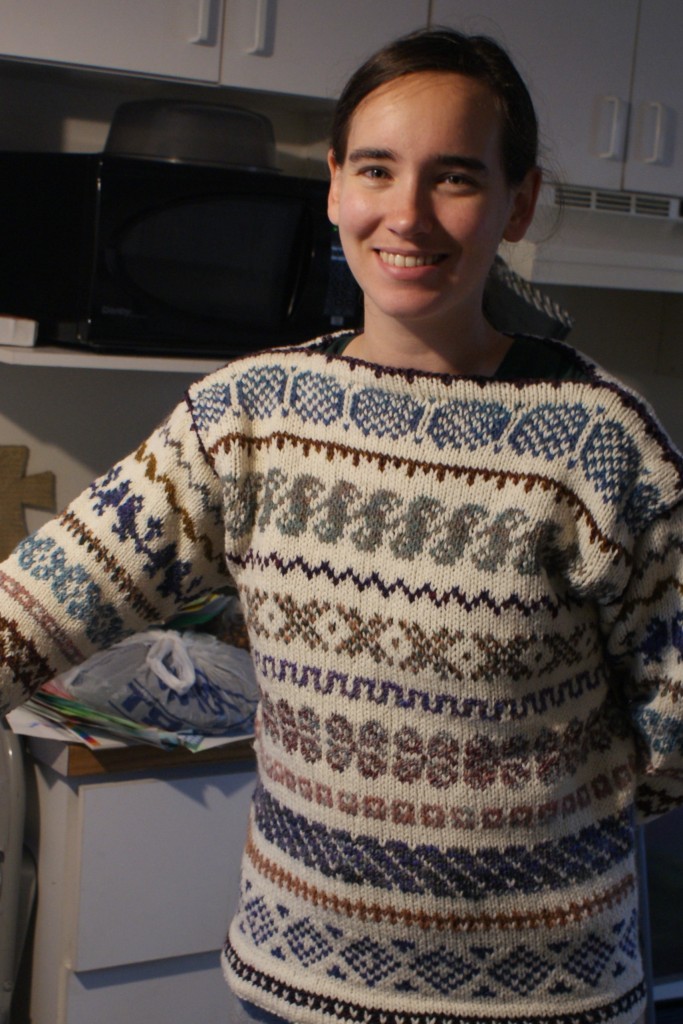 This sweater is so… wearable. I don’t wear handknit pullovers much because I get sweaty, then the thing has to be handwashed, which means it never gets worn again. But I threw this on over a long sleeved shirt on a mild arctic August day, and wore it comfortably all day. There isn’t a gram of acrylic in this thing, and with all that woolen yarn mixed in, it’s so light.

About the hem collar – I didn’t follow those directions either, and made the hem all the way around the top, rather than just around the collar (which is what EZ actually describes). As a result I have a much thicker area at the shoulders where the doubled portions were sewn together. It creates a very shoulderpad-like effect. But I think I can live with it, as a reminder to pay at least some attention next time. 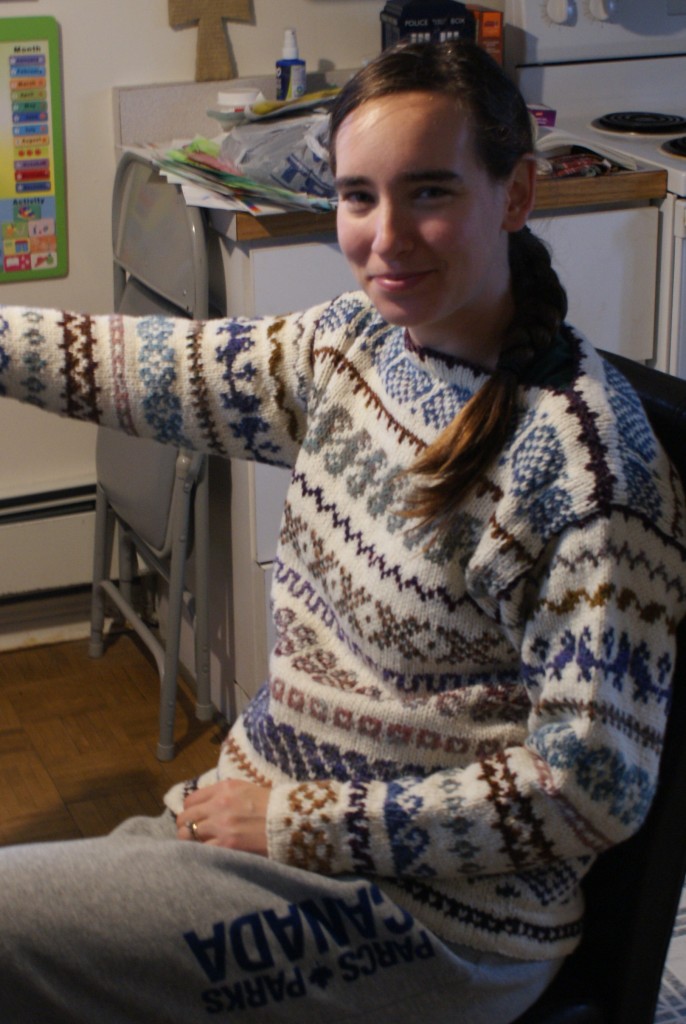 I love it. Both because it works, and because it is doubly made of learning experiences. I hope I wear it to bits.

4 thoughts on “Made of Blendlings and Learnings”