I got these little pretties at the Yarn Party thing at Savage Mill, Maryland, back in… what was that… 2014? Which makes this possibly the youngest stash I own. 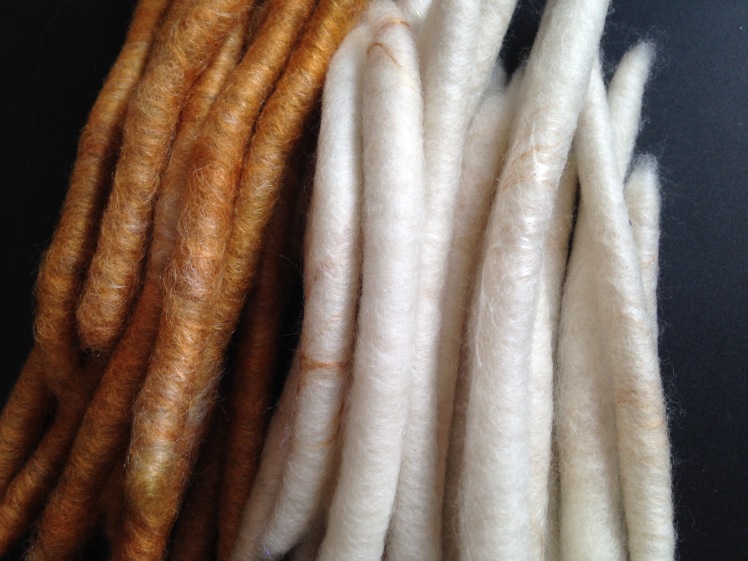 After yesterday’s post, some of you on Facebook were wondering, what on earth is a puni! Basically it’s a little sushi roll of river, generally a very fine fiber, carded on fine handcards, then rolled up tightly around something like a pencil or knitting needle. Traditionally this was used for cotton, but it is also a fancy way to prepare luxury fibers for a small amount of fancy spinning. Gourmet Stash, from whom I bought these punis, has this handy page of explanation, but if you’re not a spinner that might be a bit much. Its easier to watch than read, and this short video shows a cotton puni being made. (Though I don’t think Gourmet Stash compacts her punis post rolling that way; I don’t know. )

Back at the Yarn Party, I bought a mystery package of punis from GS. The idea is, since you’re buying blind, you can save a few buckzoids and have a nice surprise. This last week I’ve needed something short to tide me over while I waited for my handcards to arrrive in the mail, so I pulled out these pretties and started pulling them apart. 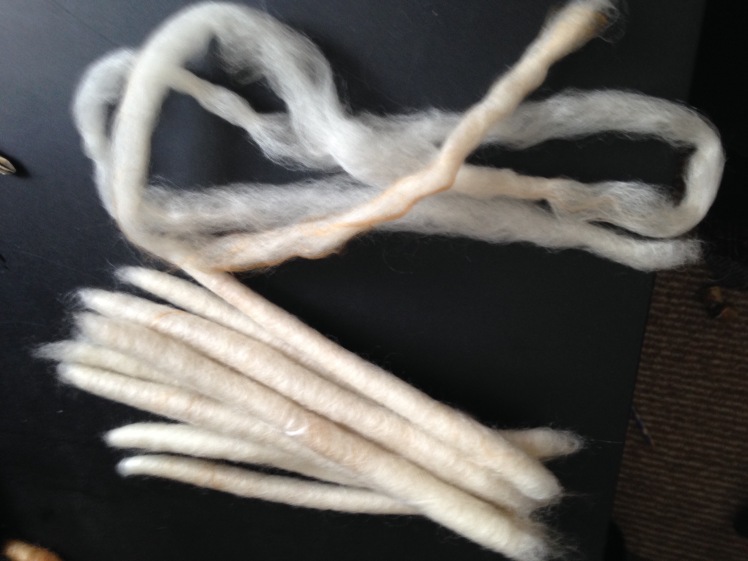 Above you can see an attenuated puni next to intact punis, for length comparison. They just sort of explode into puffy loveliness when you stretch them out, though there were some points where the fibers knotted into a tiny chokehold. I blame that on my stash habits; they were perfectly packaged in tissue paper and plastic, but compacting is a little inevitable over that length of time.

I wound them into little nests the size of a Kinder Egg and started spinning. Short forward draw, 1″ draft, 15:1 ratio. (How happy I am that my fastest ratio works now! Turns out all it took was a better drive band. Hemp twine rather than dishcloth cotton. Sheesh.) 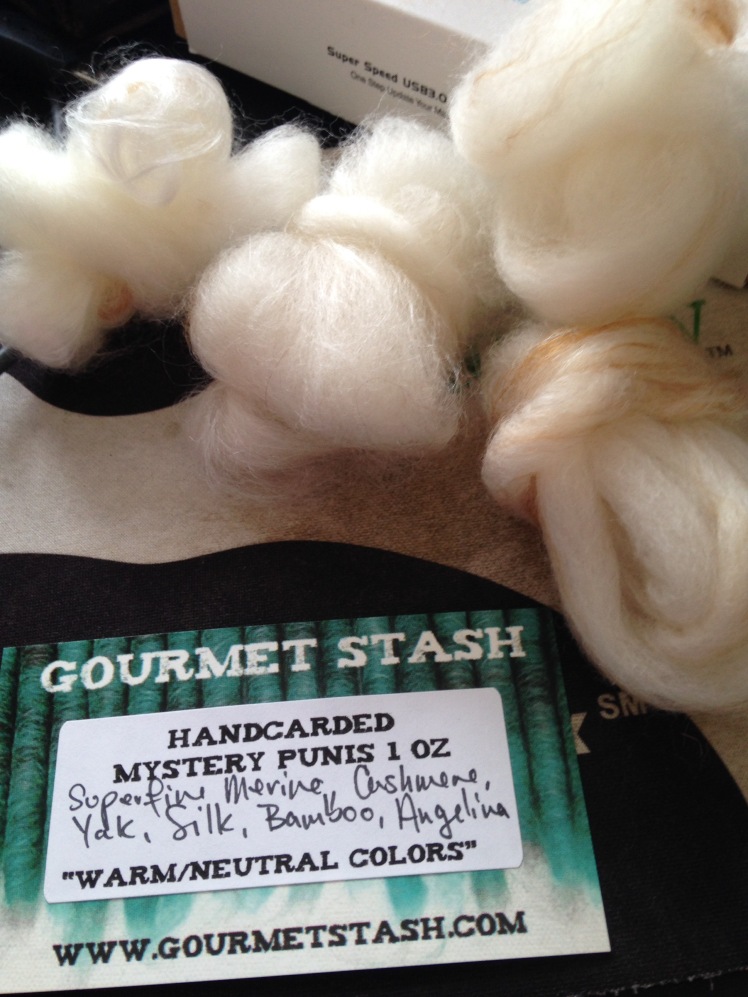 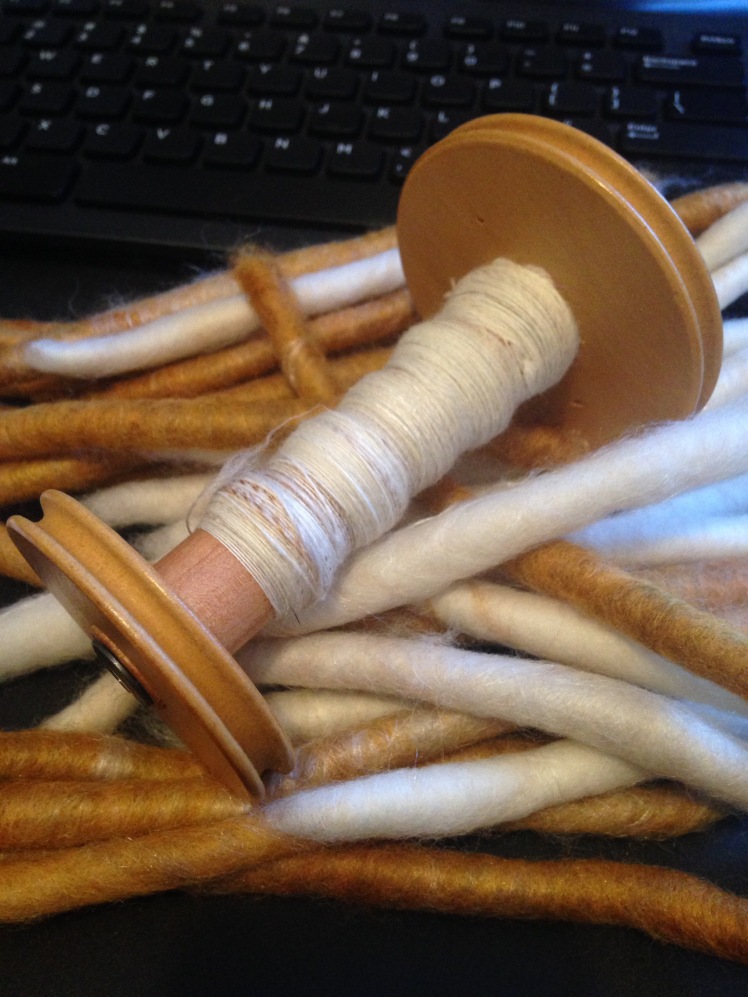 With such a small amount (just over 1 oz total) sampling seemed a little silly. But I had 17 caramel punis and 22 white ones, so I did the five extra whites first to make sure I knew what I was doing.

Oh, what a delight! I spun thin and tight, knowing the superfine merino was probably the dominant fiber and could take the twist.

I watched this nifty video on chain plying for a refresher, though next time I definitely will let those singles rest because they were a handful. 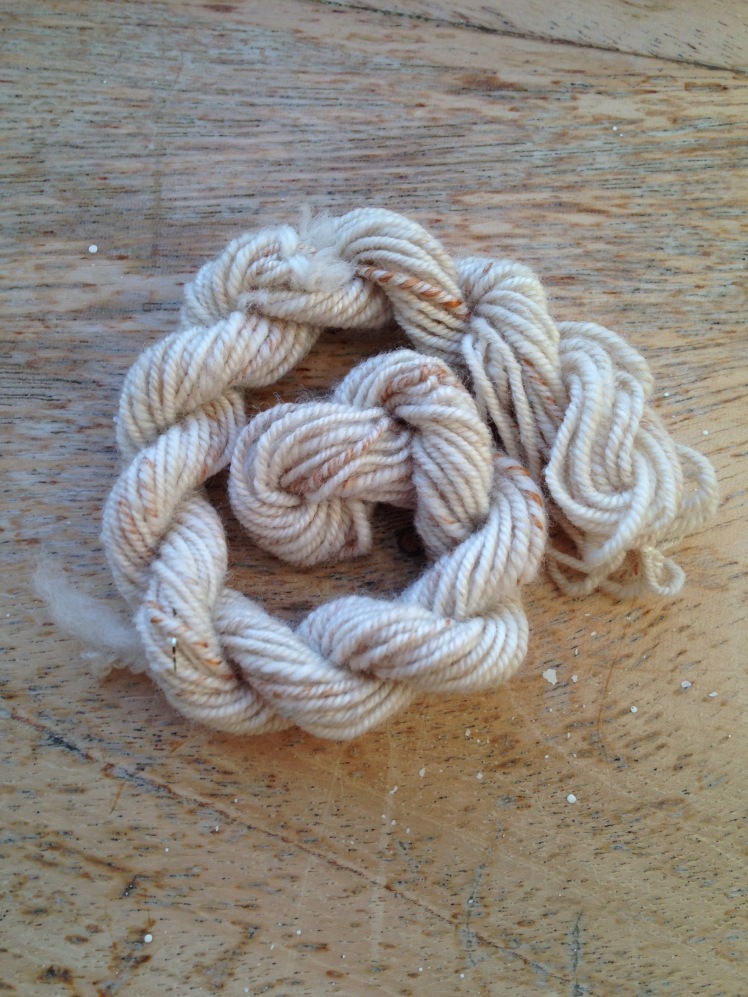 A 3 ply might seem an odd choice for such a small quantity of super soft yarn. Shouldn’t I 2 ply it and make something lacy with a good shake more yardage? That would be the expected thing, yes. By I’ve had an idea for these fuzzies ever since I bought them in 201?, and 3 ply roundness and durability is called for. My idea is only confirmed by our family’s recent obsession with My Neighbor Totoro. I’ll leave you to puzzle out what that means.