My next experiment from Deb Menz’s suggestions in color study exercises (Color in Spinning, pp. 48-50), was mixing value. Basically, I wanted to take one hue, and mix it slowly from dark to light, to see what happened.

I mixed three colors for my sample: light teal, dark teal, and blue, mixing from light to dark. This time the gradation shows up very clearly on the bobbin.

Remember my nice little speech yesterday about how I was going to take my gradient experiment and spin the ends together, which would pretty much ruin the gradient effect, but make it more usable with the other blendlings in a bigger project? When I was planning this one, I thought about that, said NAH and split all the strips in half. The above is half the fiber, spun from light to dark; the rest would be spun dark to light, then plied from a center pull ball, which would pretty much match things up.

So as not to repeat the mix-up of the previous blendling, I took my separated nests and wrapped them into one mega-nest in the right order!

You can see the gradient mirror in the center-pull ball: light to dark then back to light. 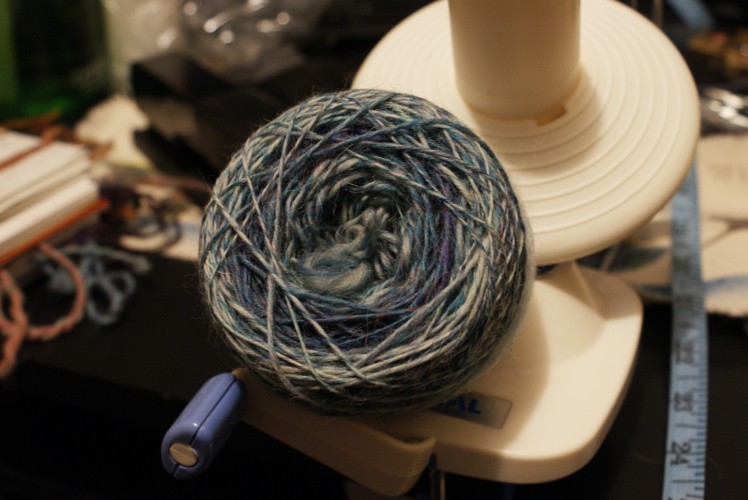 With the matching colors together, the gradient effect is intensified.

I have to admit, when I took this off the niddy noddy, I was really disappointed, because it had gone so thin. I had tried to spin the same way as the previous skein – semi-woollen and fast and fun as possible – but it was late at night, and I hadn’t been attending to my work as much as I would have in a different state of mind. There’s an important lesson in this: if you want to be consistent in a project, don’t spin when really tired!

That, plus the intense gradient effect, means I probably won’t be able to use this with the others. At least there’s a good bit of it, enough to all by itself become a hat for one of the kids!