I confess that I was a teensy bit angsty about turning thirty. Jared and I both turned thirty in April: me on the sixth, him on the twenty-third (yes, such a cradle-robber, me.) Now that I’ve been thirty for a month, I’m pretty much over it.

Here’s my favorite thing about turning thirty: I’m really, really not a kid anymore. There are still a ton of adults who think of me as being “really young,” and hey, fair enough. I’ve got lots of life experience ahead of me, and I’m happy about that. But I don’t have to prove anymore that I’m an adult. Being “in my twenties,” I still felt like I had to apologize a bit for being precocious. Turning thirty, somehow having those big round numbers to my name, I feel like I can give myself permission to fill my own boots. Here I am. Adulting. Not, like, doing it well, but who even cares? I’m thirty, that’s good enough!

I had a few moments, in March, of wondering if I’d really accomplished anything in the first three decades of my life. Now, I can hardly remember where that thought even came from. I mean, Jesus started his ministry when he was thirty. We moved up here at twenty-nine. Really, we’re overachievers.

These are the best times of our life, right now. They’re flipping hard work. They could undo us. These years will change us. They will break us down and turn us inside out. But they will be amazing. We’re still beginning, but we’re beginning real life. We’re not rich or famous; we don’t have laurels to rest on. But we’re living. No more preparing. This is the real deal.

I really believe that, but I have to remind myself of that fairly often. I’ve thought for most of my life that I would end up as some sort of missionary, and do super-cool things for Jesus. But when you have a family, even if you live in some awesome unusual place and God uses you to do good work – you still spend a large part of your life doing dishes, cooking dinner, wiping butts, and wondering what you’re supposed to be doing with the fifteen minutes you have before you should really go to bed. That’s still true if you don’t have a family, except hopefully not the wiping butts part. Somehow they failed to bring this up at all those cool youth conferences with talks by visiting missionaries, but I probably wouldn’t have absorbed that reality if they had.

To be perfectly honest, even writing this post is an exercise in positive self-talk. At this moment, I’m fighting exhaustion because the baby’s been keeping me up half the night for a week, the kitchen table is surrounded by sticky clumps of oatmeal from yesterday’s breakfast, there are two days’ worth of dishes piled up, I don’t know what’s for dinner, let alone when I’m going to start the laundry, i’ve knit all of two rows in the last three days, and I have to strategically plan the rest of my week so that at some point I have a two-hour slot during which I have enough emotional energy to write a sermon. It’s so, so easy to get overwhelmed. I get tired. I spend a fair share of time feeling disappointed, or anxious, or unsure of whether I’ve done the right thing, or whether I’ve done enough. And I am looking forward to our vacation in June rather more than I wish to admit.

But then I remind myself. “You’re living the dream.”

The truth is, I’m incredibly blessed at this point in my life. In the current world economy, to be doing what I love, and actually employed doing what I love, at age thirty, is nigh unto miraculous. To be able to share a position with my husband, so we can both keep a good work-life balance and share our calling, is a fairly unique challenge, but also completely amazing. To have two precious daughters that we get to shepherd into maturity, is definitive. I get to study Inuktitut, make friends in two different cultures, be there for them as a pastor, and speak God’s word into their lives. When I take time to stop and reflect, I have a so much to be thankful for. This season is a continual exercise in thankfulness for what does go right, letting go what doesn’t, and bringing it all to God, to wrestle through it and find rest.

[Edited to add: In that vein, I should add that I’ve taken a lot of time to work on Inuktitut this week, I got an extra evening to play board games with my spouse, and I haven’t had to cook since this time last week. So let’s be fair.]

Wow, that got really sentimental. I’m a little too tired to tell if it’s trite, but it goes with the unwritten subtitle of this post: “good enough.” Speaking of which, Let’s talk about Jared’s sweater, shall we?

For Jared’s thirtieth birthday, I wanted to celebrate thirty ways: so for fifteen days, every day he got a gift and a special food. I confess to missing a couple days in the food department, and not all the gifts were from me, but we had a lot of fun. There was lasagna, grasshopper pie, angel food cake, walking taco, a few batches of sweet rolls, and schwarma. Jared got a couple of big gifts, like a snow knife from me (he has to learn to build illus so we can go camping next April, obvi), and several little gifts from Naomi, like a novelty candy where you dip pink plunger-shaped lollipops into a pink toilet full of pink sugar dust (I’d love to have been at the sales meeting when that idea was invented). In the midst of this, in the third-to-last day in April, I was able to give Jared his completed blue sweater. 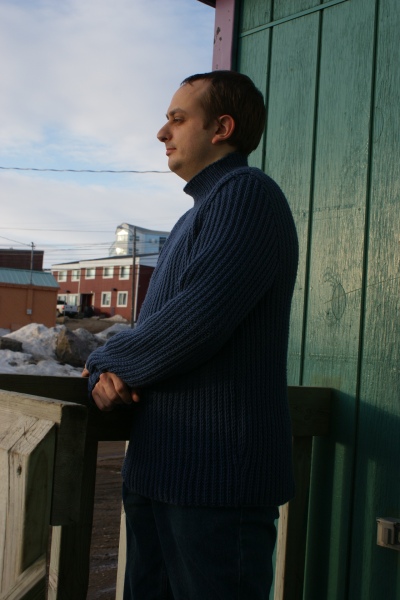 Yeah, he bought the yarn. Yeah, he knew I was making it. Yeah, knitting it for him was kinda also his Christmas present. But dudes and dudettes, this sweater was a lot of knitting.

I worked hard to make this sweater just right, adjusting the pattern to make it more fitted, swatching carefully to find a fabric he’d like, and experienced miraculous provision when it became clear I was going to run out of yarn. But experience does not prevent mistakes, and apparently, I am always ready to demonstrate that fact.

I did not wash my swatches. 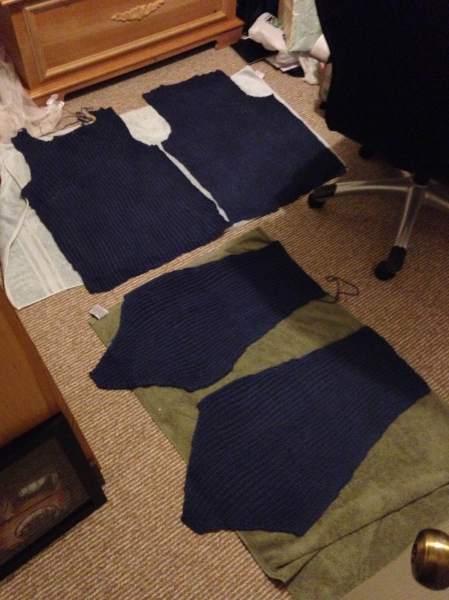 When I bound off the last piece, having re-knit the second sleeve cap because I knit most of the thing accidentally thinking the wrong side was the right side (I still think the bumpier side of half-fisherman’s rib looks more interesting), I dutifully washed the pieces, soaking them as is my wont. But when I went to lay them out to dry, they seemed… large. And kinda floppy. I did not stretch them, rather gently massaging them in to get them to dry as small as possible, but it was clear, the damage was done. This sweater had grown. All my work to change a pattern for a big floppy relaxed sweater into a fitted, professional-looking sweater was for naught. This is a big, relaxed, casual sweater. 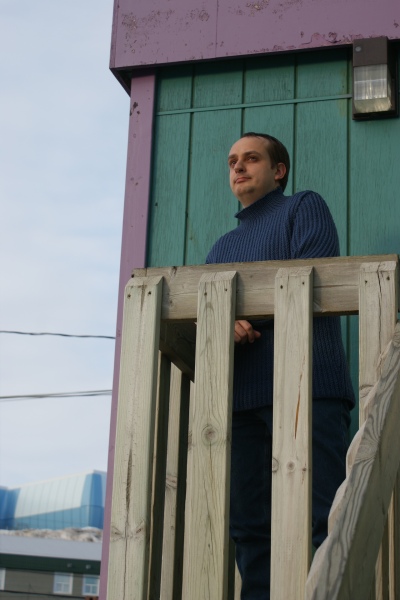 Then again, think about what would have happened if I hadn’t adjusted it to be smaller and more fitted. The thing would have been a circus tent.

Yep. Being thirty is going to be about being grace-filled. Which really just means rolling with the punches, and being thankful, because Jesus.

Today, I’m grateful for my thirty-year-old husband, who looks great in blue, no matter the silhouette. I’m so happy to be spending the best years of our lives together.