I should now officially be down to one project. But I’m not.

Many months ago – I think I first blogged about it last September – I decided to get my WIP problem under control. Seriously under control: I wanted to get down to having only one project on the needles.

My reasons for doing this were many, and I wasn’t sure if I was being ridiculous or perfectionistic in my aims. But now, at the end of April, with a second baby snoozing on my chest, I understand. My life is freaking crazy right now, and is going to stay crazy for the next several months. Knitting is one tiny area of my life in which I have the fantasy of order and control.

When knitting made up most of the physically demanding part of my life – in other words, I knit a lot, and my only other major job was graduate school, which allows for a lot of knitting – I could have five or six projects on the go and it still felt manageable. Even when I had just one kid to deal with, I had a surprising amount of down time.

But now? My hands are full. In a delightful way, with no regrets, but very very full. Not just with two kids, but with more cooking, more demanding housework, and other major changes that loom in the near future. Knitting still occupies an important place in my self-care. But to feel like self-care, it has to be rather simple. One project at a time gives me the hope of finishing something in a reasonable span of time, and with the demands on my life, it shouldn’t be too awful complicated. And back in the fall, I had too many projects. And too many big, hard projects. It was starting to feel like work.

To get down to one project, back in the fall I laid myself a progressive scheme. I was still allowed to cast on new projects, but I could only cast on one for every two projects I finished. I cheated more than once – sets of things counted as one project, commissions didn’t really count, and I lumped into one the massive slew of projects I just call “Christmas,” but I made progress.

When I cast off the fourth Blue-footed Booby slipper, my goal was complete. I only had one other project on the go at that point, and that one would be it. Monogamous knitting!

Only one problem. Said project is the Evenstar shawl, and all I have left is the enormous beaded border. 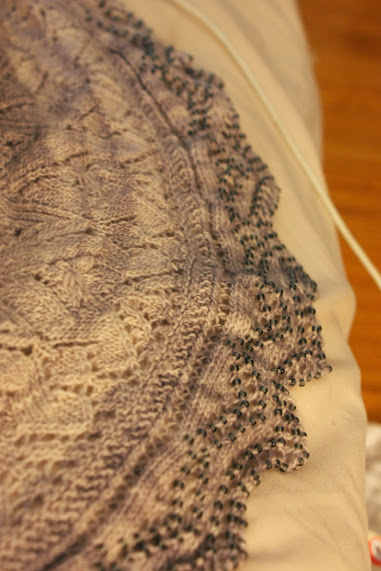 Maybe this goes without saying, but beading is really, really, really fussy. It requires my full attention, and there’s really no stopping in the middle of a row. The rows are really short, but still, they take a good five minutes, and that’s an issue for me right now. I have to be able to drop something at any moment because the baby is crying, or the toddler needs her bum wiped. I can’t really work on Evenstar while either of them is awake without genuinely neglecting them.

Add to that, the project is not really portable, or quickly stopped and started. There’s not just knitting to pull out of the bag, but beads to set up, and put away. One doesn’t really want to leave a strand of 11/0 beads out in this house. Beading in the car is a recipe for trouble, and will make even my iron stomach queasy. And the yarn itself is a singles yarn, already at risk for being worn too much just by the handling of knitting with it. I don’t want to wear it out further by taking it in and out of its bag three times for every repeat – when I work on it, I want to be able to put a good hour into it.

All that to say, this is really the wrong project for my life right now.

I have managed to pick at Evenstar during the last few weeks. There have been a few naptimes when I didn’t feel the need to nap myself, and didn’t have anything else pressing to do, and I managed to do a border repeat while watching TV. I’m too tired in the evenings. Still, I am only up to 13 repeats of the border pattern, out of 54. That’s progress, but not even double what I had before M was born. 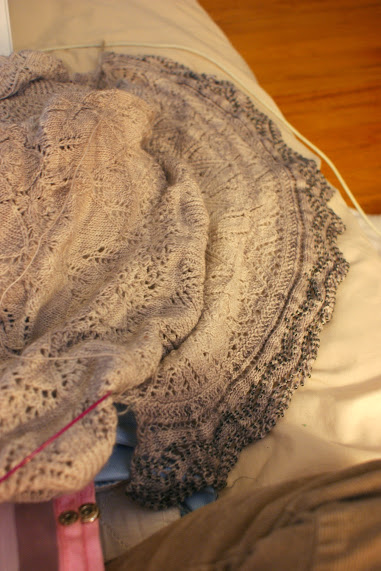 After the slippers were done, I struggled with this for a few days. I really do want to finish Evenstar. I don’t want my “Monogamy Project” to fizzle out at “one project left, and also Evenstar.” Also, I do want to knit the other beautiful patterns in the Lord of the Rings series! Is there some way I could do it? Commit to knitting on only Evenstar until it’s done?

Then I realized that such a commitment would mean that there would be times – many many times – when I could theoretically knit something, but because I was only knitting Evenstar, I could not knit. Suddenly my resolve became remarkably soluble. 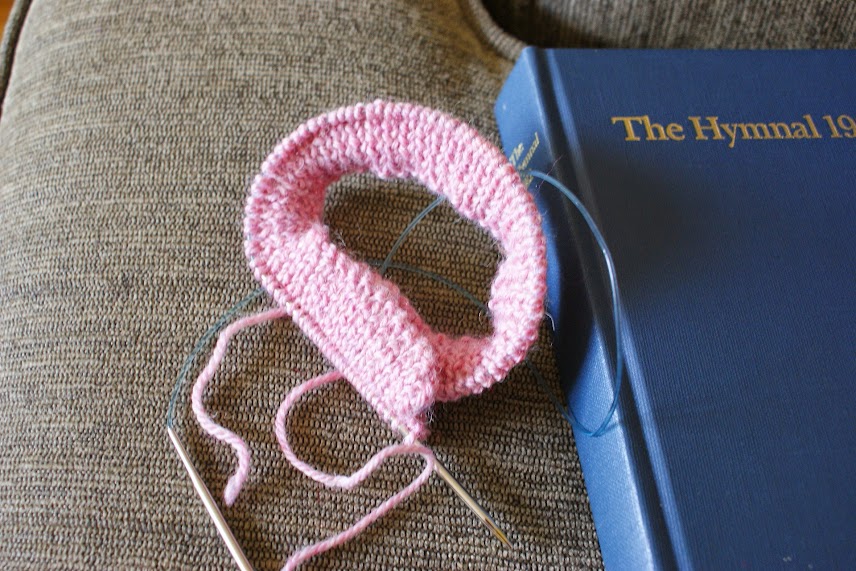 The pink sheep sweater is begun.

I’m still aiming to do one border repeat on Evenstar per day, though realistically, this might add up to three or four a week. But knitting only Evenstar would get rather close to not knitting much at all.

And that, my friends, would be a dangerous situation for everybody.

One thought on “Dalliance”