I do love to knit. But, as it turns out, even when I don’t have much time for knitting myself, there are fringe benefits to just being a knitter. (No pun intended, though I do like a good fringe.) One of them is, other knitters and craft-artists are more likely to give you handmade stuff – especially when you produce a tiny human to dress in their stitching. 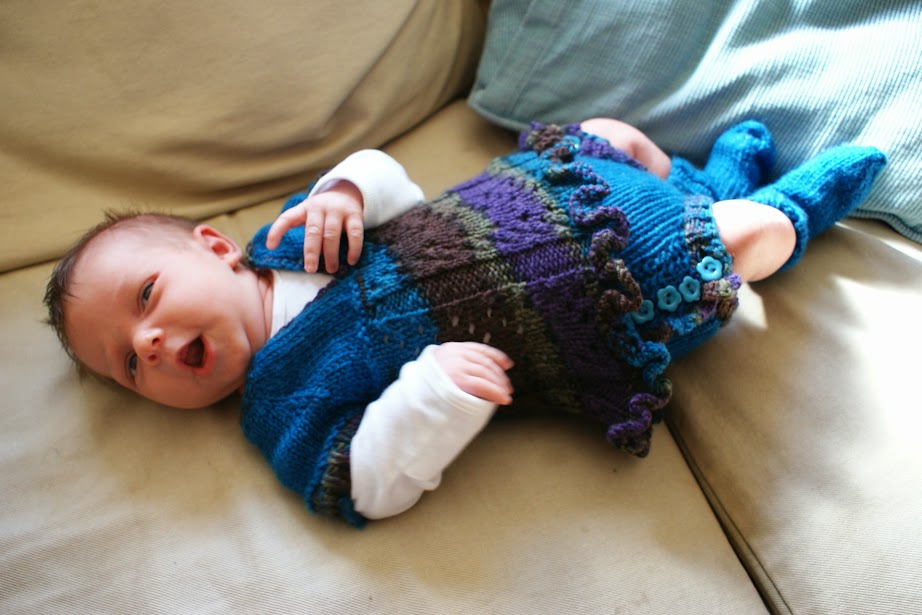 3 weeks old, in an amazing outfit knit by friend Tammy. Not pictured are a matching hat and bolero, which I couldn’t quite wrangle for this picture.

Sometimes this stretches beyond the immediate gift. I’m dressing M in beautiful handknits made just for her, but also in items made for her sister,  of course. 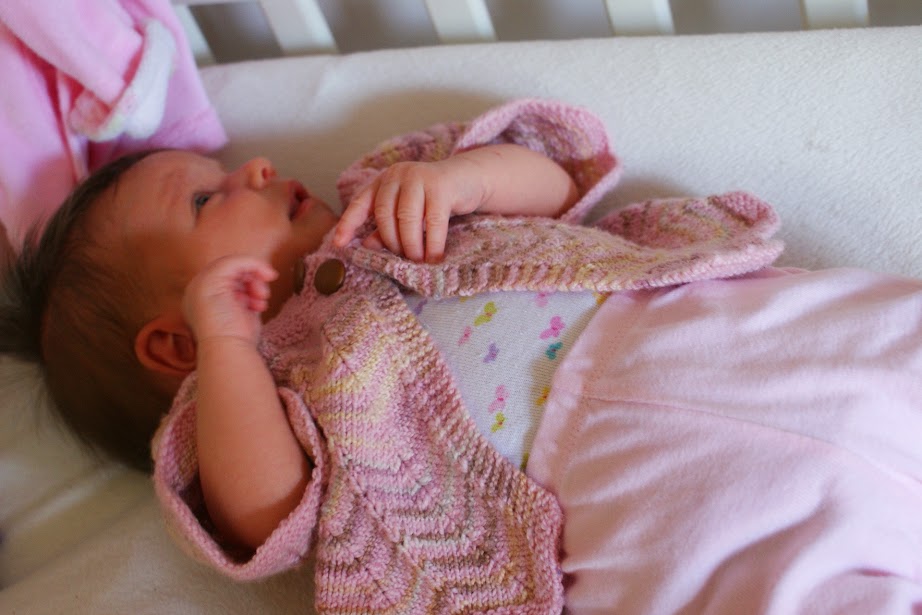 And a very practical pale pink jacket by Joanna. 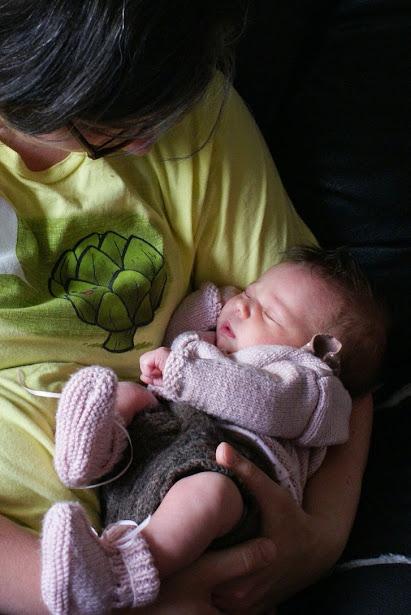 Space and time and words fail me to show you the socks that covered her long toes, the hats that kept out the last of early spring’s chill, or the blankets she rests on while her sister plays nearby. And that’s just the tiny stuff, a whole other box awaits her first fall and winter.

But some of these passed-down pieces of cuteness have traveled much farther in time, made long in the past for a baby who is now a grown-up. 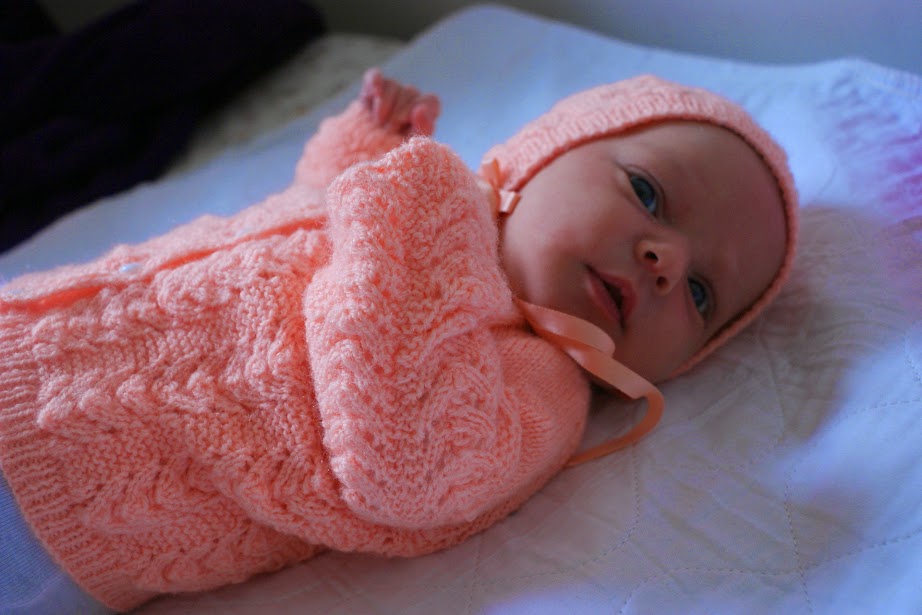 1.5 weeks: In a peachy outfit knit by great-aunt Anne for aunt Carina.

Knitting is love, as knitters know. When I was showered with knitted outfits for N, I received them as such. But it’s wild to think that, when those outfits were being knit, the knitters were also stitching love for a child not even suspected yet. For a generation not even imagined.

Even more so when the knitter in question has since passed on. Here is M in the company of her uncle Justin. We didn’t know it when I took this picture, but Justin was the original recipient of the little blue outfit M is wearing, knit by Justin and Jared’s grandmother, who died when they were very little boys. 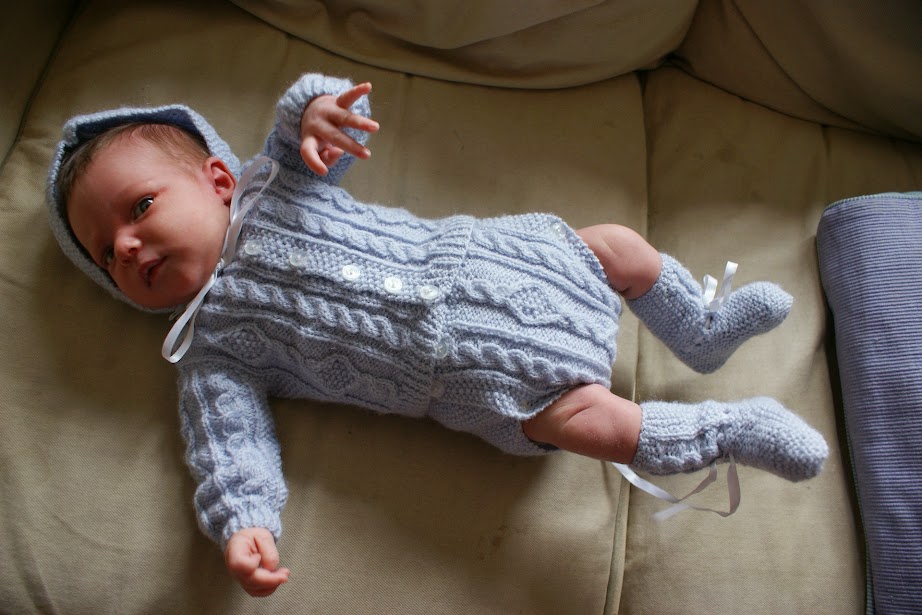 And here, at 2.5 weeks, she is wearing a little crocheted outfit by her great-great-great-aunt Mena, who meant a lot to Jared. 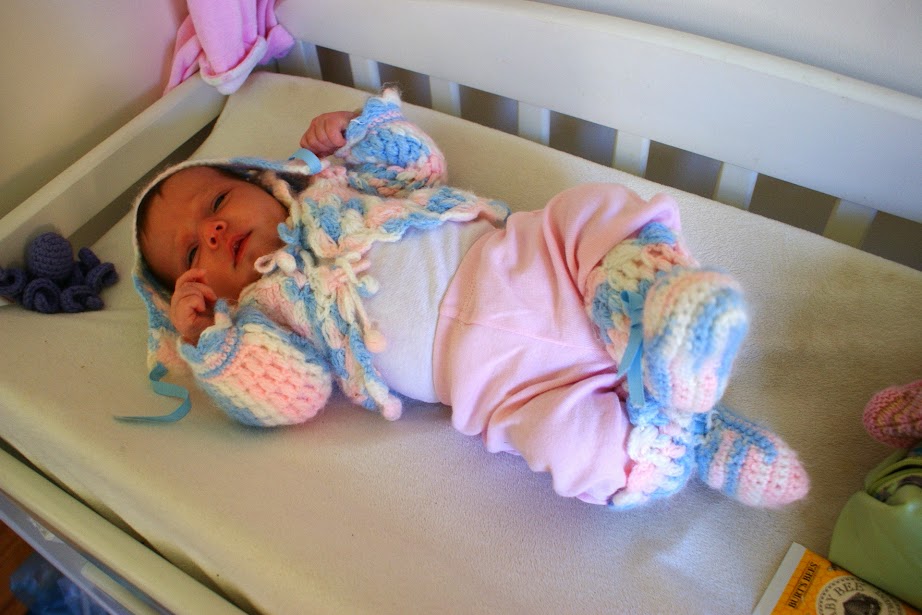 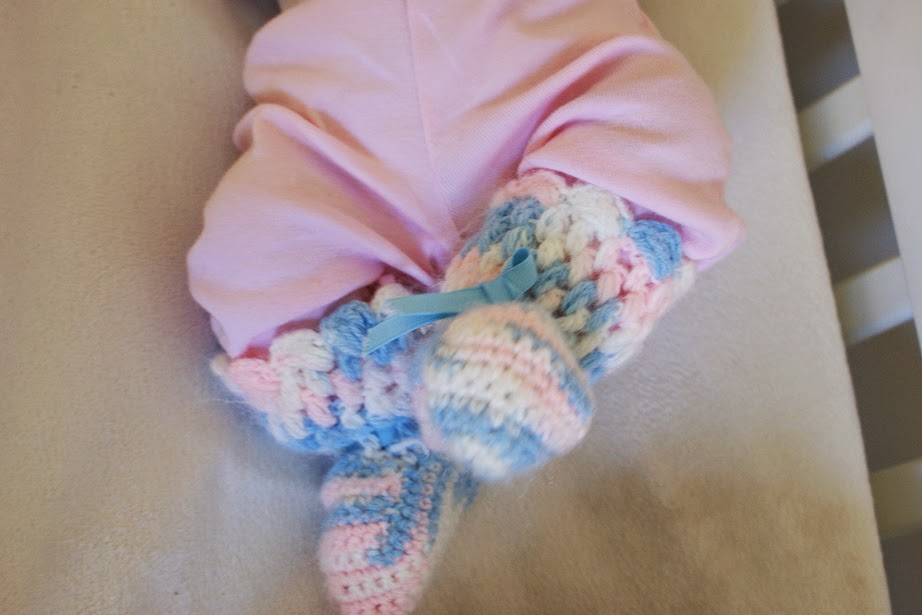 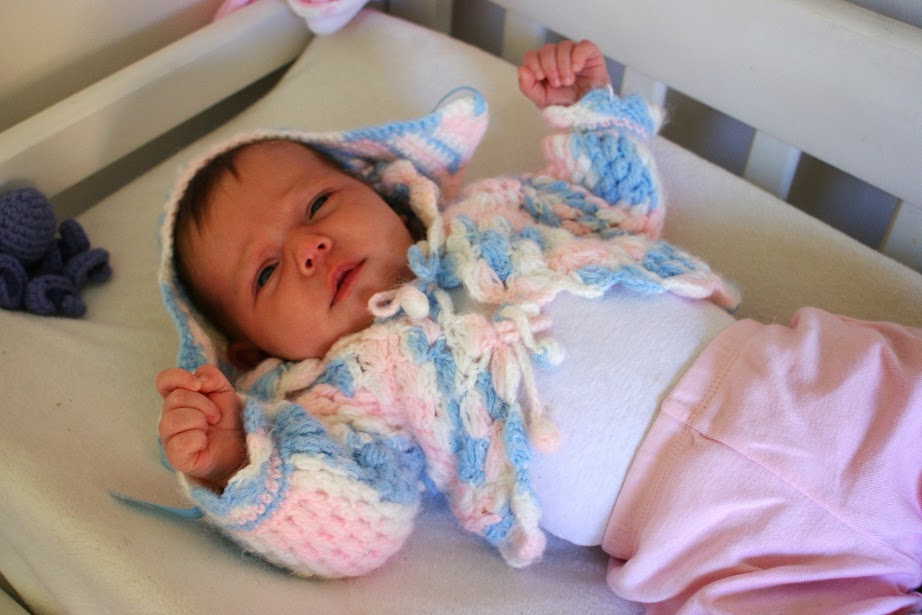 It’s poignant to me to think of these two women, whom I never got to meet, but who were matriarchs in the family I’ve joined, sitting in their living rooms, stitching away. They weren’t thinking of my daughter as they worked, but somehow it counts as if they were. That love is still good, because this is still their family, and M is the tiny one now.

And that, I suppose, is what makes an heirloom. Not a difficult, frilly, obtuse, old-fashioned pattern (what the term often is taken to mean when applied to a knitting pattern). But an artifact of love that has the power to create belonging.

You do belong, new little M. You belong to God first, but He’s given you to belong to us. Happy one-month birthday.