I have set myself the goal of getting down to one project. One knitting project. True monogamy of the two needles.

I don’t really remember why I’ve set myself this goal… maybe just to see if I can do it, without deciding I despise knitting so much that I set my whole stash on fire? No, I think there was a good reason. I think it had something to do with simplifying and focus.

Oh, and being overwhelmed by too many projects. The trouble is, the closer I get to the goal, the more that feeling wears off.

But I want to try it. I seriously want to see if I can do it. And I just want to know what it’s like, you know? To go to knit and really only have one option. To finish something in the time it takes to knit it, rather than everything taking forever because my knitting time is shared between three or five or ten things. I haven’t been in such a state since 2004. And who knows, I might enjoy it!

To reach this morally exalted state, I have given myself a piecemeal approach: I’m allowed to start one new project for every two completed. I think this might increase my odds of success, even though it means one step back for every two steps forward. I just started a new thing, which means before I can fulfill that startitis itch again, I have to finish two things on the go. Who are our contestants at this point?

My last step back was casting on the next pair of self-imposed socks, “Canal du Medi.” I’m enjoying them well enough, and socks don’t take that long to knit. So these are looking pretty good. 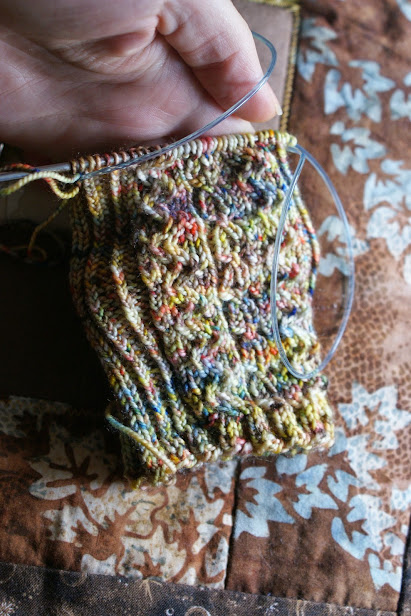 I won’t even bother showing you the reward sweater, since it looks exactly the same as the last three times I took a picture of it. I think it’ll be more encouraging to show you this picture of the yarn I have left for the sweater. This is a reminder that I am much farther along on this sweater than it feels like when I work on it, because the sleeves are done. Done! A major effort could push this out fast.

Of course, the real reason I haven’t worked on this is that we haven’t listened to “A Prairie Home Companion” in a while. I’ve actually had the thought, “We should listen to Prairie Home Companion tonight so I can work on my sweater! I miss that sweater.” I should do something about that. Like, get the podcast. 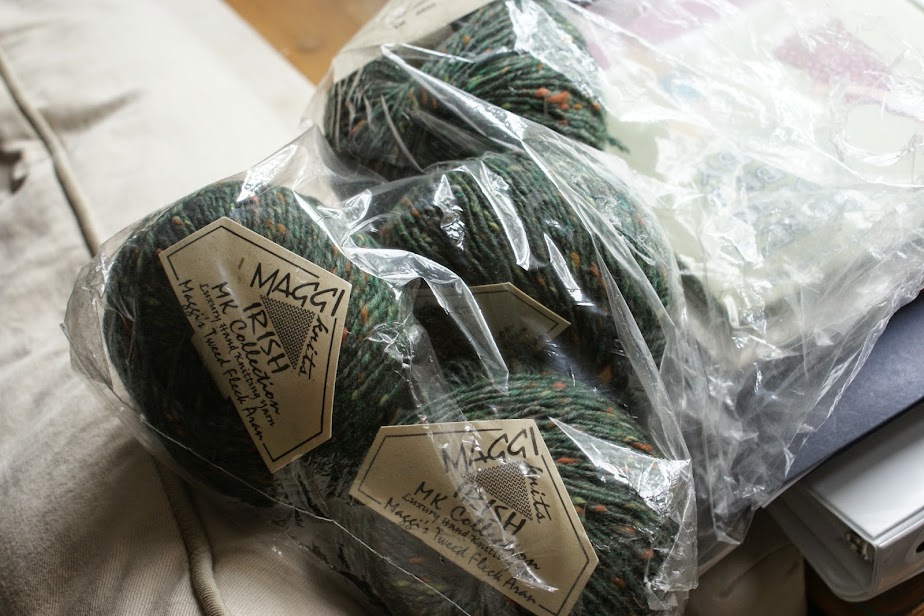 The last week has been spent zipping through strips on the colorwork blanket. This is strip #7, out of 10. This seems impossibly far off from the finish line, but it really isn’t. I’m obligated to at least start the last strip by our last class, in mid-November, and we’re having a finishing party before Christmas. This thing might get done before other things in this post, at that rate. (Besides, this mosaic stitch is entertaining the heck out of me.) 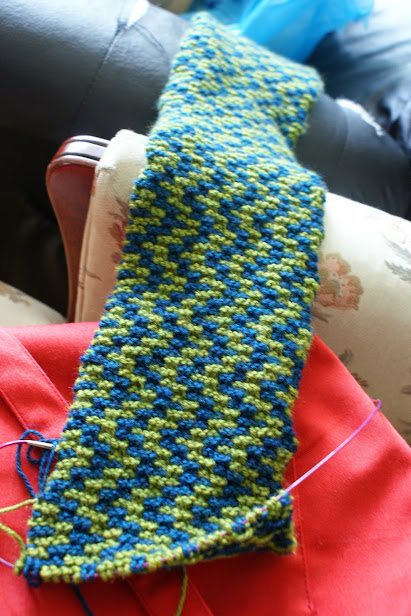 I know I said I put this one to bed, but it’s my last good reading knitting, so I pulled out the endless weaver’s wool shawl made with an insane Unique Sheep shawl set that Jonica gave me. I got all excited when I attached this new ball of yarn, thinking it was the last one! But then I found the actual last one, the most purple-ish, bopping around the bottom of the project basket yesterday. That means there’s a whole pair-of-socks worth of knitting left in this shawl. Oh well. It’s still my only real reading knitting, and I’m trying to make myself read some real books sometimes (you know, to keep my brain going), so this has the hope of a prayer. 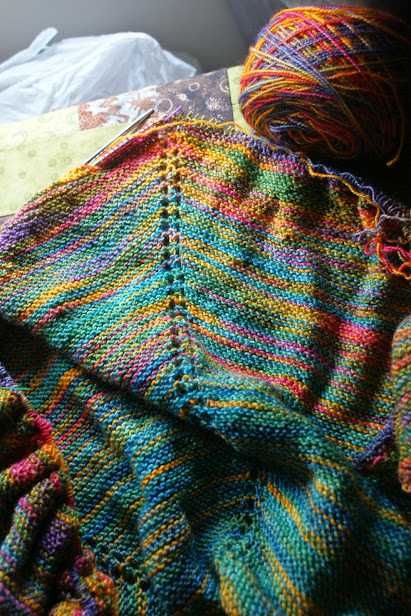 Our next contestant is the Evenstar shawl. I love working on this, and it’s been my special treat to let myself work on it on Sundays. I’m through more than half of the next chart. But I confess, I’m sort of saving this one. Some romantic part of me wants this to be the last one left, the first project I cast off with nothing left on the needles. My first monogamous bind-off in ten years.

But then I remember the beaded border that took me seventy-two hours last time I knit it. That might be a recipe for disaster. 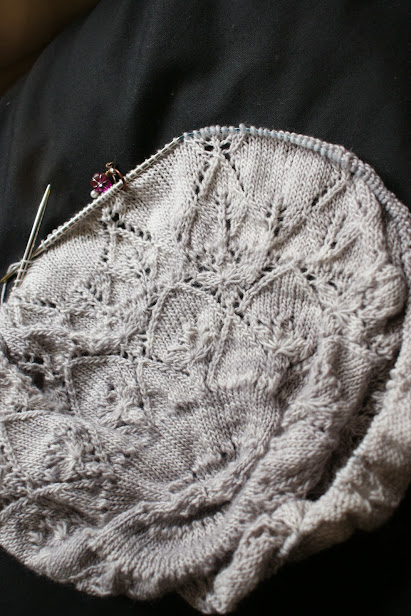 Just to throw myself a bone, I’ll include this bit of spindle spinning that I don’t think I’ve even shown you. I bought these gorgeous punis as a treat while at an indie yarn and fiber fest in Maryland this spring, and I started spinning almost immediately. I have no plans in particular, just a nice fine two-ply out of this luxurious stuff. Spindle spinning is a little hard on my back and shoulders right now, so I haven’t worked on it often. (Also implied in my quest for knitting monogamy is an equal state of spinning monogamy, so if I finish this, the Interminable Gradient Project will have no competition for my fidelity.) The other advantage is, despite appearances, this is like 3/4 finished. Two long movies and I’ll be ready to ply. Bummer that I never watch movies these days. 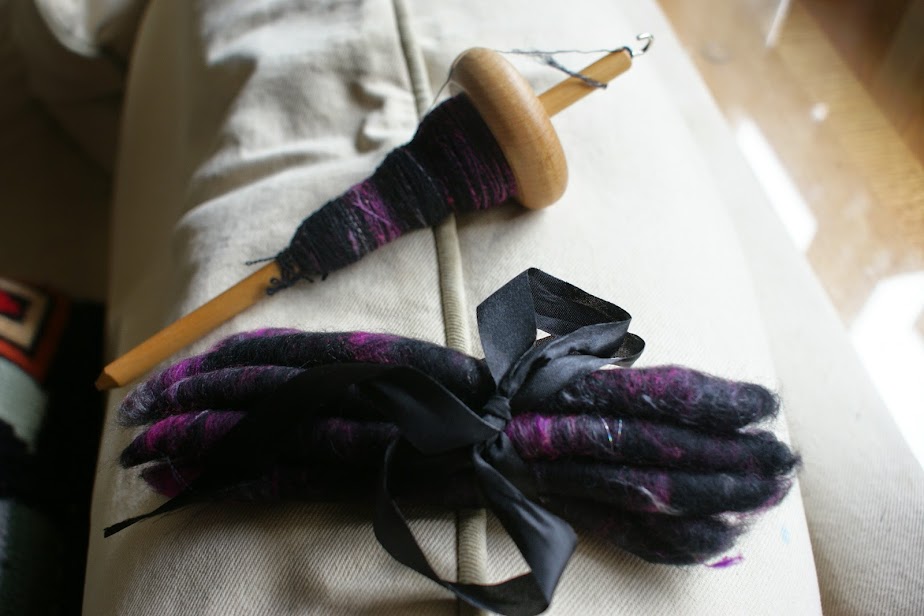 So there you have it: six projects in the line up, and two of them have to make it to the finish. Where would you put your money? If it were you knitting instead of me, what would you finish first? Or would you say the whole plan is stupid and go cast on something new? (On second that, if that’s what you’d do, maybe don’t tell me.)

4 thoughts on “The Competitors”