It all started with Bird Bingo. 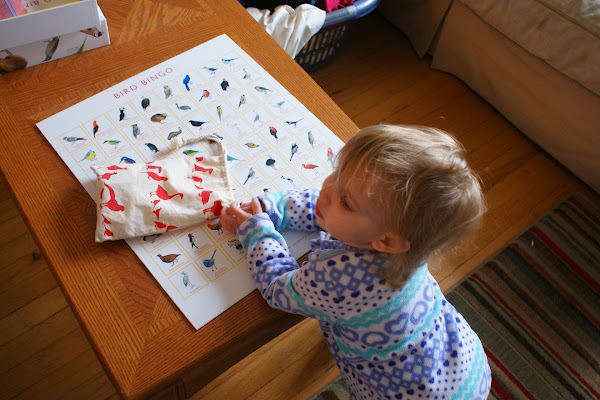 Literal Bird Bingo. Jared’s dad had gotten this game for N’s birthday – she had a thing for a random animal matching game at Mimi and Granddad’s house, and this was a close replacement – and sure enough, N loves it. We don’t actually play bingo, of course; we dump out the bag of bird cards and match pictures.

After a couple months of this, N knows each of the 64 species of birds by name, and many random facts about them. She knows the Blue Coua is from Madagascar. She knows the Shoebill is related to the Pelican. She knows the difference between a Herring Gull and the Wandering Albatross, which look awful similar to me. She struggles with Ls and Rs to say Lilac Breasted Roller (which, when she says it, sounds like “yi-yak byested woi-yo.” 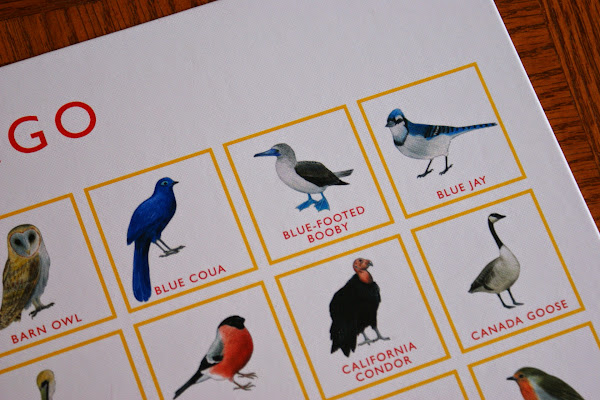 The Blue-footed Booby. (It’s a British game, we think.)

Somewhere along my internet browsings, I ran across this pattern for baby duck slippers. It includes instructions to make a larger and varied pattern for a toddler, and suggests making them in blue, calling them, indeed, Blue-footed Booby slippers. I was charmed years ago when I saw this, and the idea lodged in my memory, though like most baby/children’s patterns I see and like, I had little hope that I would have time to make them.

But then I made the mistake of mentioning to N that I could make Blue-footed Booby slippers for her and Baby Sister. In the weeks that followed, I was asked many times, in N’s special syntax for inquiring about location, “Booby slippers is?”

So when M was six days old, and I’d been cleared by the finishing of the Dalarna socks to cast on something new, I reached not for the coveted sheep sweaters, but for a skein of blue KPM that I’d purchased at the same time. 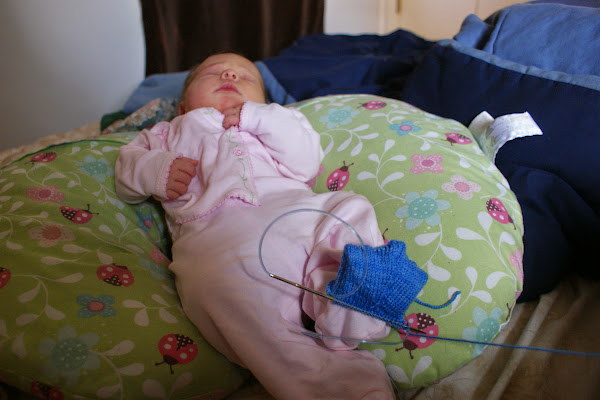 And tiny Booby Slippers were begun. M’s were knit exactly to the pattern’s original specifications, the 6-9 month size being just right for my newborn’s inexplicably long feet. They were fun! They were novel in construction! I even sort of enjoyed all the applied I-cord!

Now, I am utterly enchanted by the idea of knitting matching things for my children. It is one of my many contradictions that, while I want my girls to be strong and powerful and eschew bright pink, I have no qualms about putting them in ruffles and going “squee!” at their cuteness. The idea of two little girls, of varying size, in coordinating cute things, increases the squee factor exponentially.

So I really enjoyed that first slipper. Then I realized I had to make three more, and almost despaired. 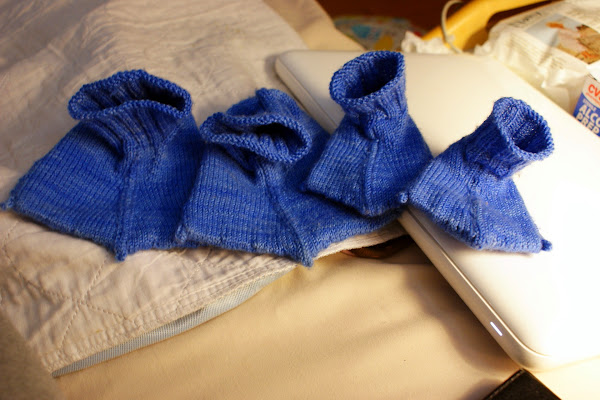 But I got into it. I gave myself relief by knitting a big one second and fourth, and working out the changes for the larger version kept me entertained.

The toddler instructions rather depend on you using different yarn of a larger gauge, which obviously was not going to happen here. So I had to re-jigger the pattern considerably, adding another set of magic-cast-on stitches at the beginning, working out when to start the gusset decreases, incorporating that with a very different sized foot hole. Somehow I managed to get measurements off my two-year-old perpetual motion machine. And mercifully, even though I’m not sleeping for more than two hours at a go, the departure of pregnancy hormones has re-enabled me to do basic math. 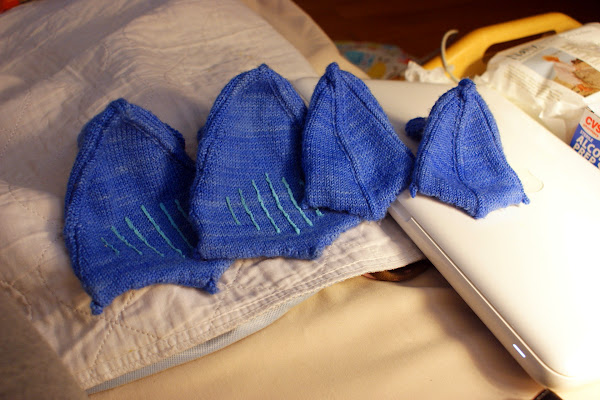 The vastly different bottoms are according to the directions. The anatomically correct foot-bottoms of the tiny size are highly diverting, but who wants to walk on I-cord? On the bigger slippers, I kept the decreases on the outside of the foot, as per the sample, picture rather than the directions, because I thought a line of decreases in the foot’s middle might still be uncomfortable to walk on. The soles are puffy-painted as suggested. 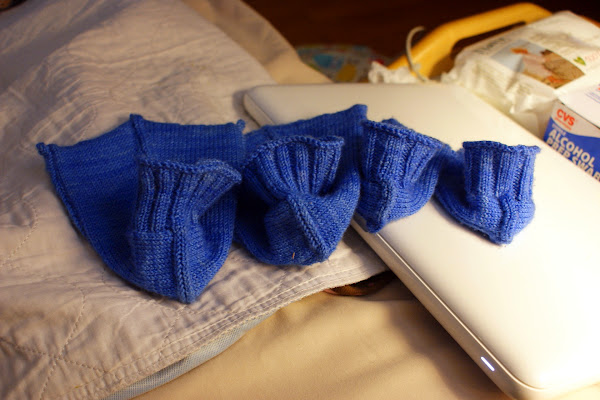 The only other subtle change I made was to the backs; I decreased two stitches for every row of I-cord on the larger slippers, so the I-cord wouldn’t be so dense and bunched up. And of course the cuffs are a bit longer.

I highly recommend the pattern. It took two skeins of KPM to finish both pairs, in the end, though I think I have enough left of the second skein to make another small pair. 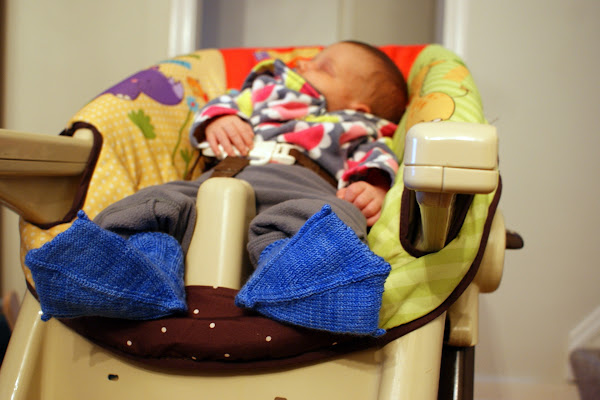 Right now they are the only pair of hand knit bootees or socks that actually stay on my newborn, who was born with feet too long for newborn socks. And as for N? 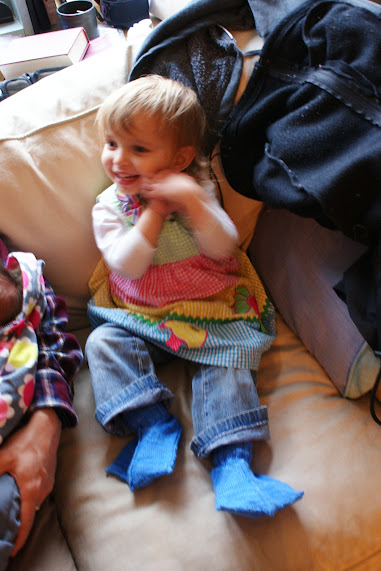 She loves them. We can hardly get them off her long enough to give her a bath. When she had to wait for the puffy paint to dry, it was like I had cancelled Christmas. And when M loses one (i.e. every time I change her diaper), N makes sure she puts it back on as soon as possible. 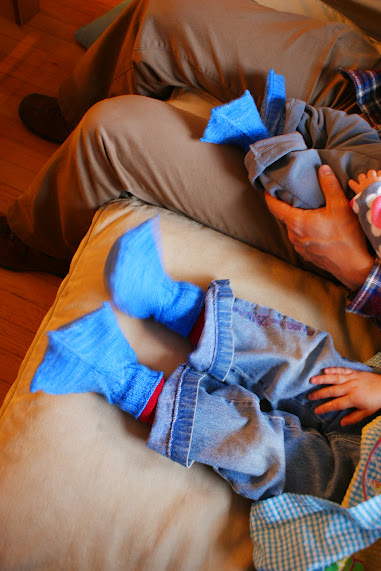 I am very satisfied with this endeavor. And every time I see N flopping around the house with her Booby-feet, it makes me smile. 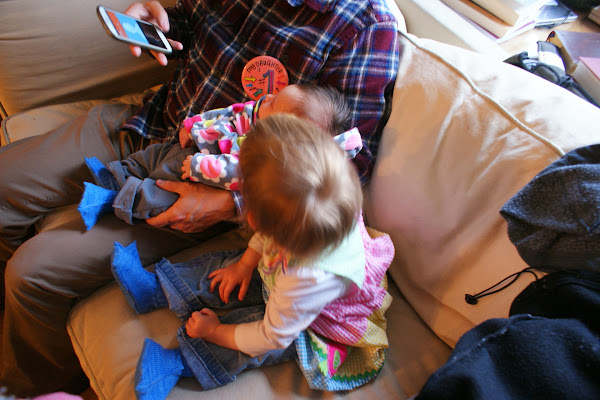 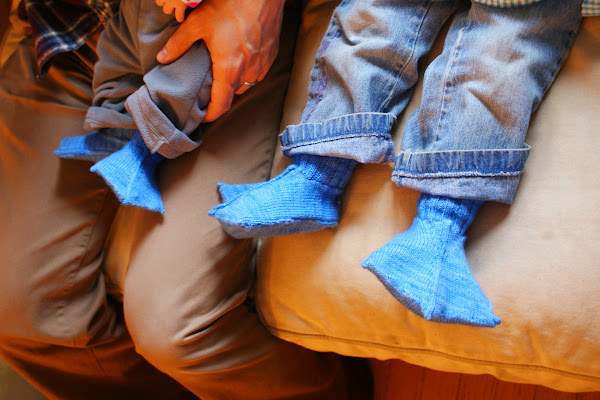 Blue-footed Booby slippers. Because life should be at least a little bit ridiculous.

One thought on “The Booby Slippers”