While my mother was in the process of launching Colorstorms as a new business, and I wanted to keep designing for her lovely yarns as I could, we agreed on a design assignment for me. We decided on a small project – one skein each of two colors of Woolpaca solids – a shawlette, something quick and fun. She brought up several skeins of her solids, I picked Magentastic and Groovy Green, and I started ruminating on design ideas.

That was over nine months ago.

Distractions came up – CPE and babies and all that. (If you’re new here, hi! I had baby #2 three weeks ago. Go easy on me.) But, for all that time, the yarn sat out in the studio for inspiration, and ideas kept marinating in my head.

By the time we left on our trip to Iqaluit in late January, I had a silhouette and a general design mapped out, but could not at all decide on a stitch pattern to take up the anchoring center of the shawl.

Then, while we were in Iqaluit, on our tour of the Nunavut general assembly building, inspiration hit all at once. This beautiful building was full of artwork symbolic of the region and its wildlife and culture. That was when I learned about the saxifrage: a little star-shaped flower that is the official flower of Nunavut.

Since we were there in the depths of winter, we didn’t see the flower in the wild. But in the assembly building, there is this sculpture that captures nature in metal and precious and semi-precious stones. 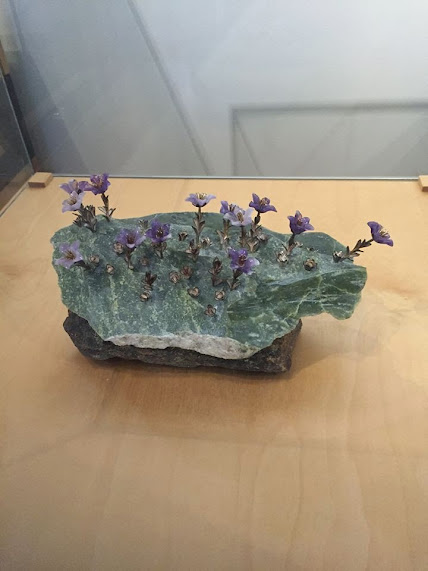 That was it. I knew instantly. I still wasn’t sure how I would do it, but the shawl would belong to the saxifrage flower.

As soon as I got home, the real work began. I started swatching, with varying degrees of success. 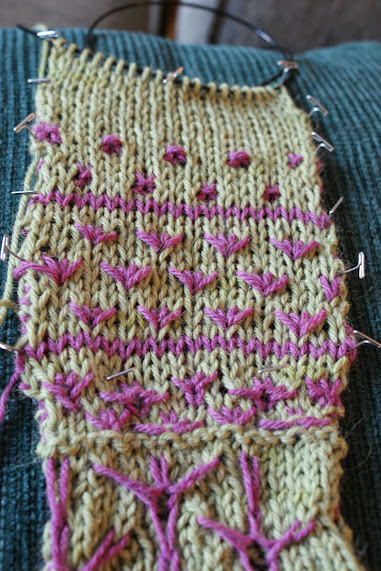 Experimentation was the order of the day in figuring out the rest of the design, too. I’ve knit my share of crescent-shaped shawls, and I knew some of the options for carrying them off, but the design in my head made certain demands that no one technique I knew of would allow. I also knew that I have a perennial tendency to make things too complicated. Keep It Simple, Stupid, I kept reminding myself.

I ended up with a combination of decreases at the edges, integrated decreases, and short rows. But it’s simpler than it sounds, both in execution and in look. Written directions turned out to be the easiest way to explain everything, though I included charts for the most incurable chart-lovers. Even though I had to knit most of it at least twice, thanks to my trial-and-error method of getting the geometry, it was off the needles in just over a week. And I rather love it.

My idea was to get the feeling of looking over a field of flowers, with the effect of perspective making them closer together as you look into the distance. I haven’t seen such a field of saxifrage myself, but I saw such pictures in coffee table books and posters, which made me wish to behold them with my own eyes.

I love the springy contrast of colors. I love the way the slip stitching comes together so easily, and the little bit of double-ended knitting makes me feel clever. And I still love the yarn – on big needles, the alpaca/wool blend feels soft and airy.

It’s a fast knit, and a small shawlette, with a wingspan of about four feet after a firm blocking. It’s perfect to keep the shoulders warm, or keep around the neck with a pin. (I apologize for not getting any action shots; our lives were just too complicated to orchestrate that at the time, and now the sample is with my mom.)

Saxifrage has been test knit twice. A big thank you to Stacie C. and Kathy H. for their skilled work.

Or, the pattern will make its print debut at Maryland Sheep & Wool 2015, which is next weekend. Go visit Colorstorms Yarn at the Cloverhill Yarn Shop booth, and buy lots of yarn!

One thought on “Saxifrage”