Lent should really be a time for moral inventory, for an “examination of conscience,” as has ever and anon been called in spiritual circles. I have had ample prompting to so examine myself, not because I have been incredibly diligent with my Lenten disciplines (I haven’t), but because God is letting life do that for me. Waiting for a baby to turn up is more of an Advent-associated activity, but this time it is most definitely Lenten. (Baby could even technically wait to show up until Easter, but please baby girl, don’t do that.)

Everything is going really well, don’t get me wrong. I have a lot to be thankful for, and we feel very prepared, as far as one can be. But the work of raising a toddler during the nasty dregs of winter while enormously pregnant is just… Lenten.

But this is a knitting blog. So instead of actually examining my conscience before you, I’m going to do an inventory of my not-exactly-moral goal to get down to working on just One Project. True knitting monogamy.

I’ve taken the slow approach, knowing how awkward this is for me, who rarely has fewer than five things on the needles. For the past eight months or so, I am allowed to cast on two new projects for every one I cast off. There have been some cheats, like tiny emergency accessories squeaked in, and like calling all eleven holiday projects one big project called “Christmas.” And I picked up a very big finishing commission in there, which I allowed to slip in as projects whose completion would count, without their being started counting against me.

But since the last check-in on this attempt, I’ve come pretty far. 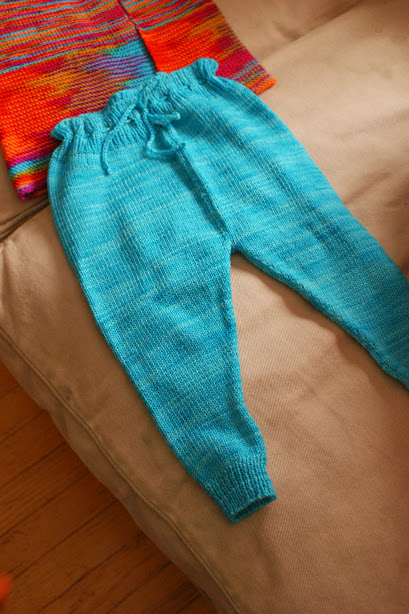 A little review for you: These pants were very soothing to knit, somehow. The combination of (sadly discontinued) Shibui Sock with bamboo US 3s was smooth and relaxing to my grumpy, tense wrists. The pattern was a little odd, though. I should have done something about the short rows on the bum, which were poorly written (I think) and left unsightly little holes. It was a commission, though, and already halfway past that point when I picked it up, so I didn’t mess with it.

All that’s missing from this zany little outfit is a ribbon closure for the top, which I’m hoping the customer can take care of on her own. 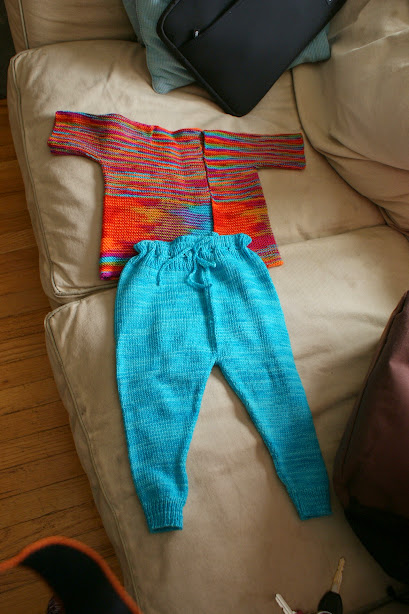 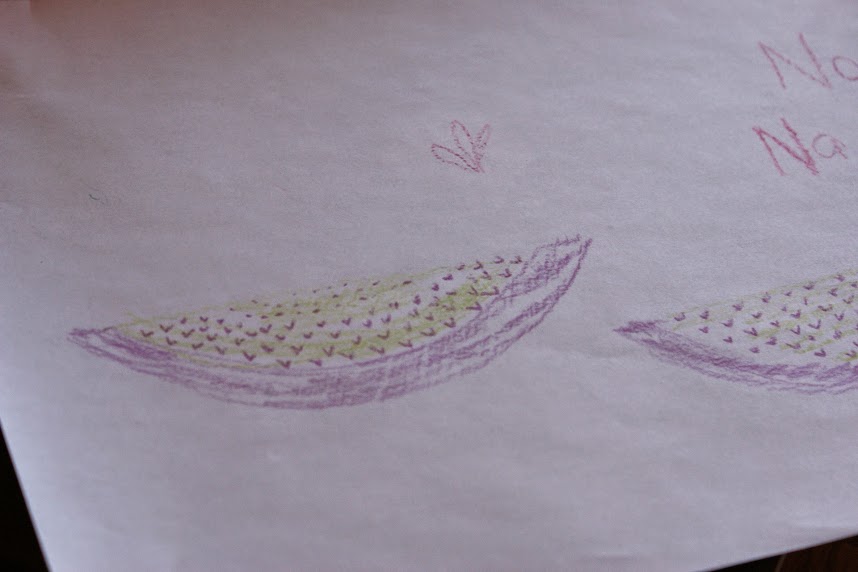 I’m still not really comfortable showing you more than this, because I’m paranoid about giving away too much information before there’s a pattern published with my name on it. [Still looking for test knitters with some free time in April.] But I am trucking through it. I’ve had to rip out every stitch at least once, because I am combining concepts in a silhouette already unfamiliar to me. But it’s a fun and fast enough knit that this hasn’t bothered me at all, which bodes well. I intend for this to be off the needles first of these three, at this rate hopefully before baby turns up. 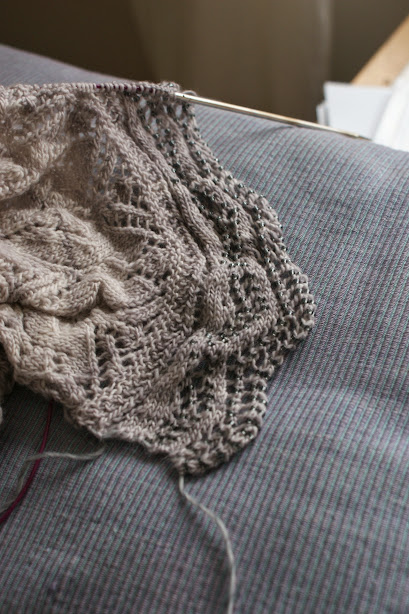 Considering where I was on this a couple months ago, I’ve made amazing progress. (Thank you, Iqaluit blizzards.) I am on the border. Which sounds impressive. Until I tell you that these four repeats of beaded border represent about six hours of work. And I have fifty repeats left to go. I know that if I stick with it, I’ll get faster, but it’s hard not to react with despair to that kind of time-suck. 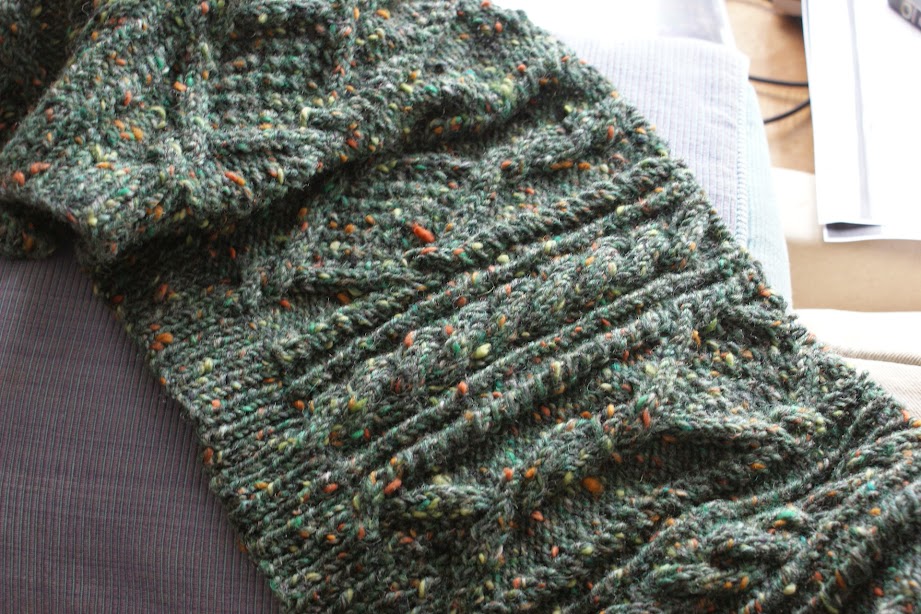 I have officially pulled this out to take pictures of it more times than I have pulled it out to knit on it. But that’s just because, while I have consigned it to the back burner, I am determined that it is not hibernating. I really want this sweater, even if at this point it’s not going to be until the coming fall.

So. Three projects left. After I finish the design shawl, I’m allowed to cast on one more, so it’ll be three again. It should be something simple, like the easier pair of the two pairs of socks still left in my knit-through of Nancy Bush’s second book.

This means a greater test of my fortitude is next, because in order to cast on the next thing after that… either the reward sweater or Evenstar will have to be finished.

I really want this, guys. I don’t even know why anymore. But project: Knitting Monogamy is still on.