A blessed Ash Wednesday to you.* And apparently, this is my 800th post on this blog. Two events which are both more interesting and important than what this post is actually going to be about!

*(I always have to stop myself saying “happy Ash Wednesday!” because that seems unholy somehow. Though I suppose from a eudaimonistic standpoint it’s probably correct enough.)

This is all the knitting that came with me to Canada. 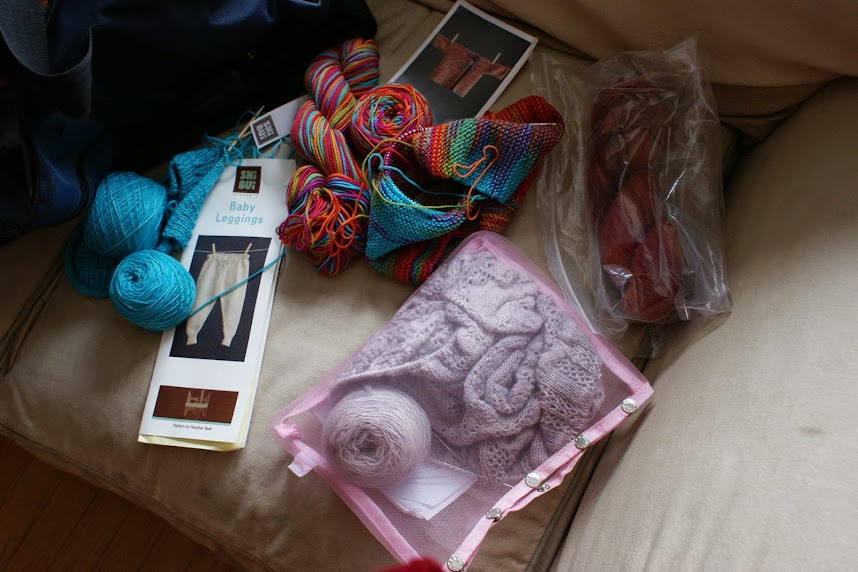 Mostly, it’s the Evenstar shawl, and a whole bunch of plain knitting. And I didn’t get as far on the plain knitting as I thought I would.

The blue project on the left, which I finally got started on the other day, and showed you yesterday, is a pair of baby pants set to go with this little baby jacket. I’m finishing both of them for a knitting student who was having some trouble with them, and wants them to be done for her next grandbaby’s arrival. Being pretty straightforward to knit, I thought I could crank them out quickly. But knitting time is at an all-time low around here, even reading-knitting time, so it took me until the trip to even start them. 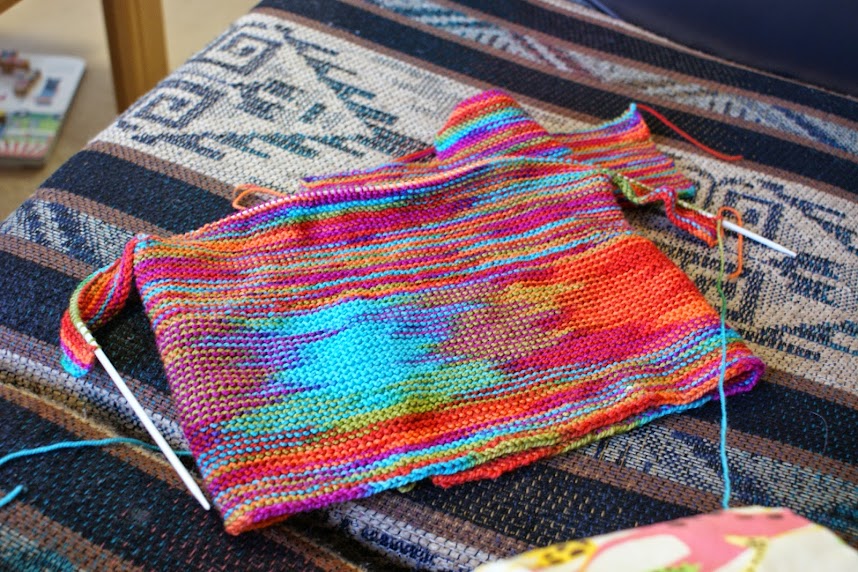 My hand in this project this project, a simple sweater out of Shibui Sock, began right at the point where you see all that pooling stop. It didn’t stop because I did anything clever; my tension is just a bit tighter than that of the person who knit the first bit. More tension = less yarn used per row = change in alignment of color repeats between rows = disruption of pooling. So it goes.

This pleasant little run of garter stitch went all over Iqaluit with me. It came to the women’s Bible study, to people’s houses where we were visiting; indeed, its little project bag doubled as my purse whenever I was traveling without the diaper bag. But at most of these places it just sat on the table/floor, untouch. I am finding that the more I learn to be truly attentive to people, the less I am able to knit in conversation with them.(Unless, of course, said person is also knitting.) Either my attention span is waning, or my ability to be attentive to people is increasing. As the mother of soon-to-be-two kids, I’m going to be kind to myself and say both. 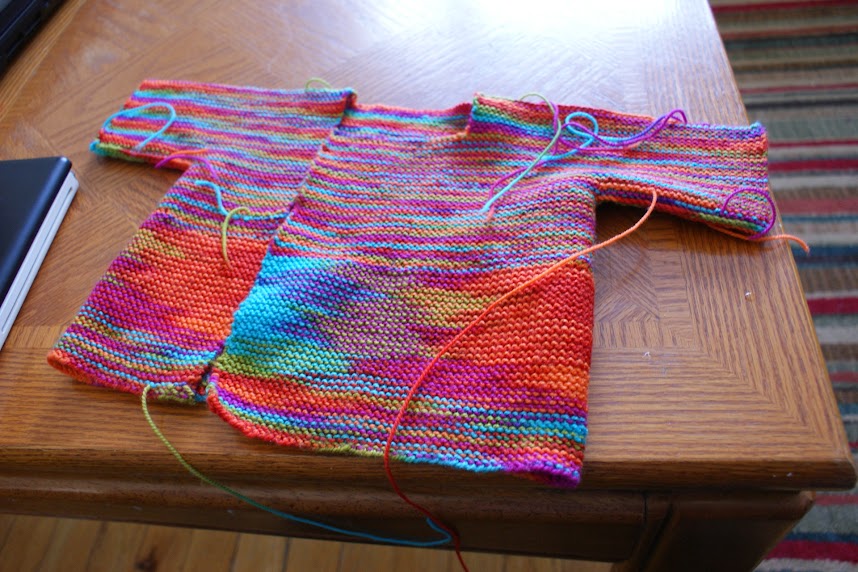 Still, I managed to finish it right after we got back. All sewn up and ends woven in, just not snipped – no scissors in reach when I was done. Also needs a ribbon consultation from the commissioner. And a blocking, of course, which it’ll get together with the pants when they’re done.

Evenstar sufficed for the sum total of pay-attention knitting while we were gone. I devoted myself to finishing that long section of four rounds, 560 stitches each, repeated six times, which forms the bulk of the window section. It creates an amazing effect, vividly reminiscent of the design of Rivendell in the movie, but that part of it is quite tedious to execute. 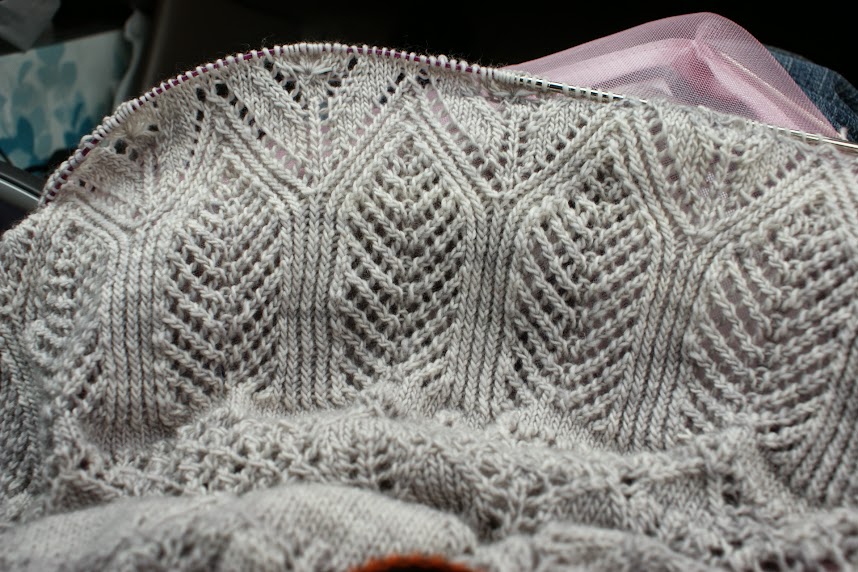 Once that was through, though, I tried pointedly to enjoy the closing of the arches, rather than rushing through it. It’s soft and pleasant yarn, the patterning is interesting, and I brought it along for something different, right? So every time I found myself getting bored or frustrated, I put it down and did something else. Probably just a little garter stitch. But that was enough. 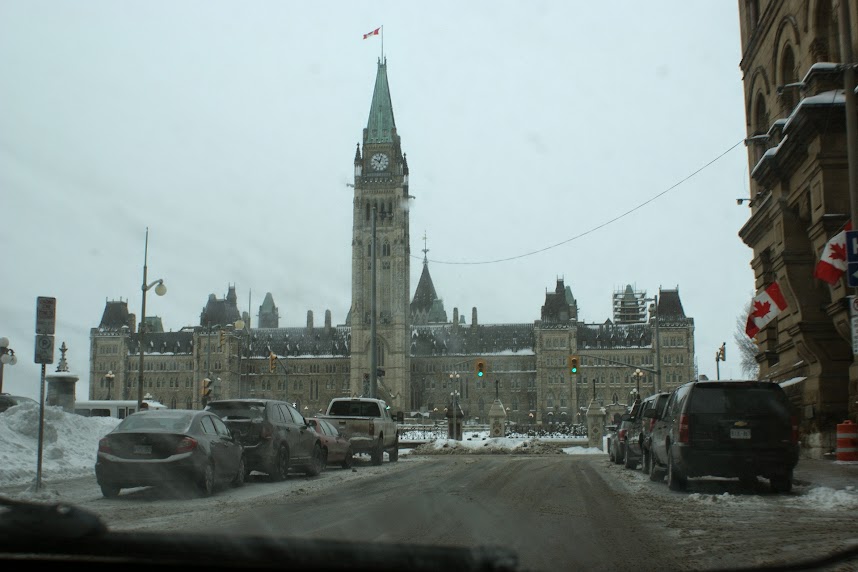 The arches were completed around the time that we got a bit stuck in Ottawa, driving in circles looking for a Telus store. This building looks important? Parliament-ish? Someone Canadian, please shame me into some real knowledge. Regardless, the pointy arches will now also remind me of this edifice.

The final portion of the body portion of the shawl reiterates the Evenstar motif itself, a clever bit of stitchery that matches the jewel created for the movies. I love the imagery, and even more love that Ms. Pandorf figured out how I could recreate it in knit stitches. But I don’t seem to remember any actual jewel being in the books? I’ll have to research that. 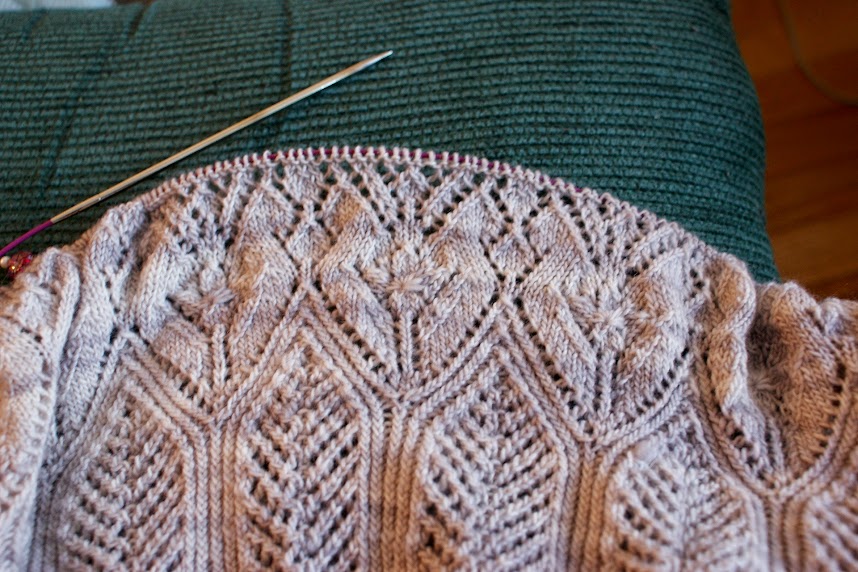 And just like that, the bulk of the shawl is done. Don’t think this means I’m finished, though. The beaded border may break my spirit yet. 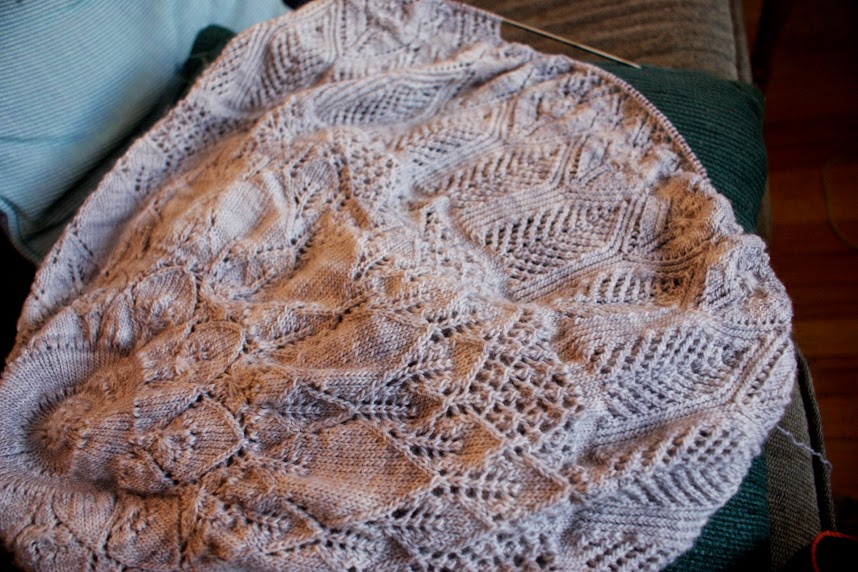 Those two projects, folks, were plenty to get me through two and a half quiet weeks in the far north. I didn’t even get close to breaking out the skein of sock yarn. But that was just insurance. When it comes to one’s knitting, one always errs on the side of overpacking.

2 thoughts on “What I Knit When I Was Out”