The season of Epiphany is here! It is more comforting than ever, as we fend off the single digits during this Pittsburgh cold snap, to sing songs about stars and glory and light. And finally, I found occasion to cook the fresh ham. 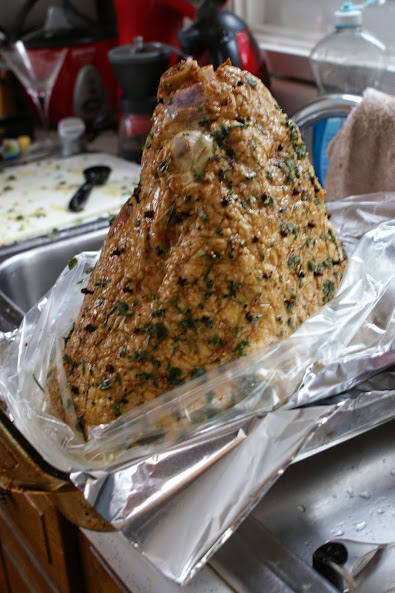 Though I have to say, seeing it all scored and rubbed and cloved, I wonder if I’m following less the star of Jesus and more an alien vision of Devil’s Tower. (I used this recipe, oven bag version.)

But I’m not here to talk about meat, or to make dated sci-fi references. I’m here to talk about the last official bit of Christmas knitting. It’s recipient was my dear nearly-two daughter. In my heartless calculations, I figured she was the least likely to care if her Big Gift from her mother was late. 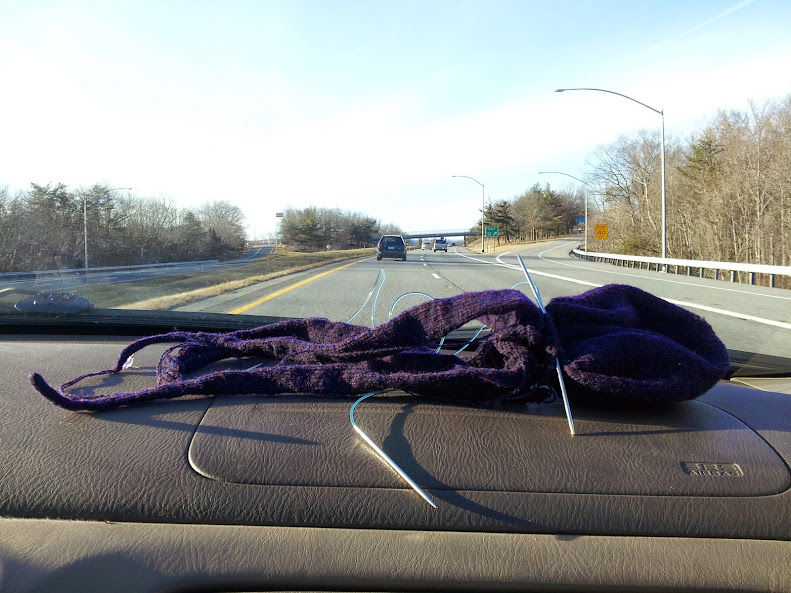 Despite this knowledge of N’s obliviousness to dates, and to pretty much anything I find interesting, I still tried nominally to hide her Christmas-present-in-progress from her. I snuck in a massive number of stitches during naptime, while on-and-off playing Secret of Monkey Island (TM); I worked on it after she was asleep at night, whenever there wasn’t a more pressing deadline. Quite a juggling act, that. Still, by New Years’ Day, when we were driving home from our Christmas visit to Maryland, N’s octopus looked like little more than a dehydrated squid. 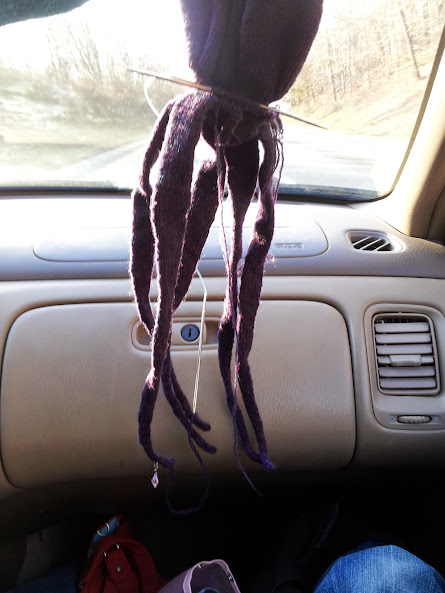 Which, of course, wasn’t far from the truth. It was to be an octopus. And, after staying up ’till 11 on the night of January 5th, stuffing the last interminable leg, it was. 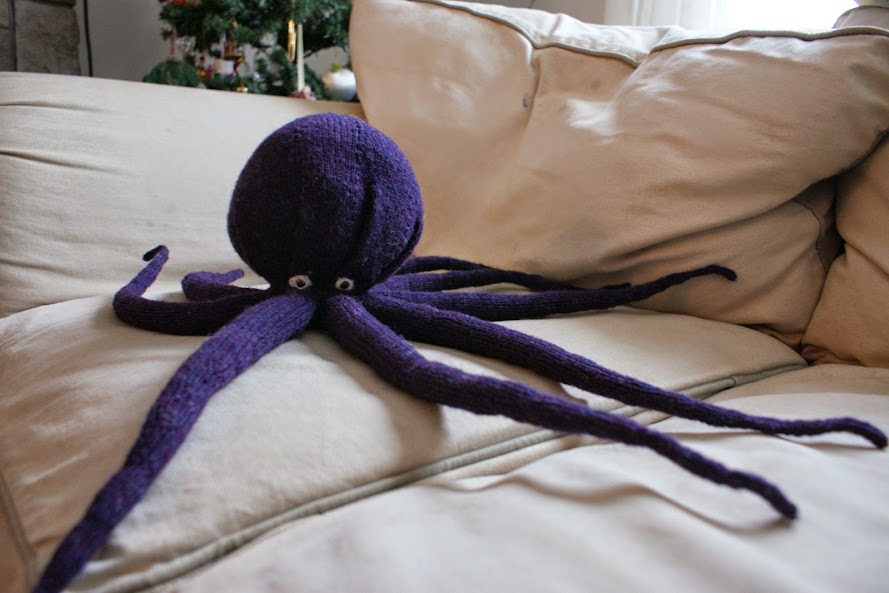 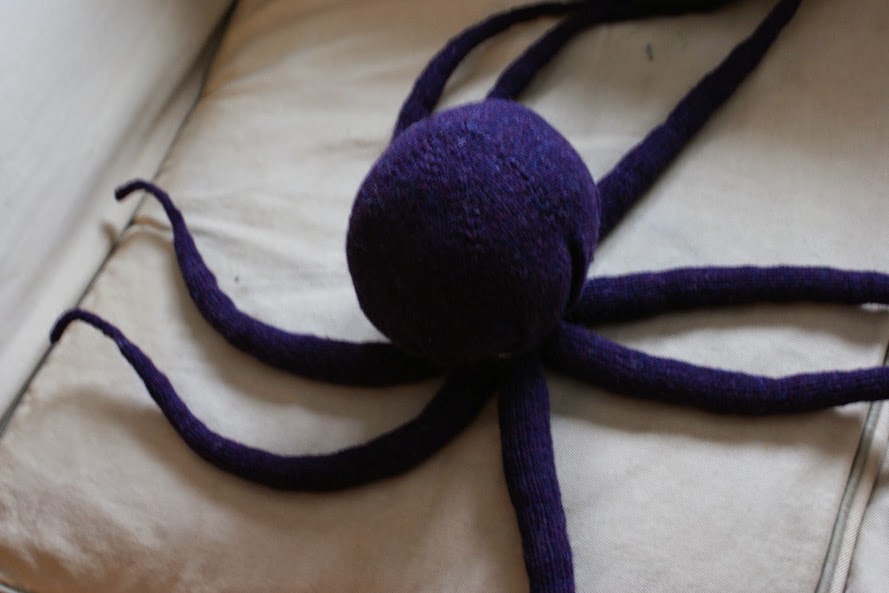 N is a big fan of the eight-legged set. She knows all her books that have octopi in them, from the evil garbage-dumping octopus trounced by Dora, to the sparkly octopus hiding from the baby looking for the beach ball. She already has a tiny crochet stuffed octopus, which we bought for her over a year ago; sometimes it sits with her while she reads.

But this, as she said immediately on opening her gift on Epiphany morning, is a “Big Ah-pus!” 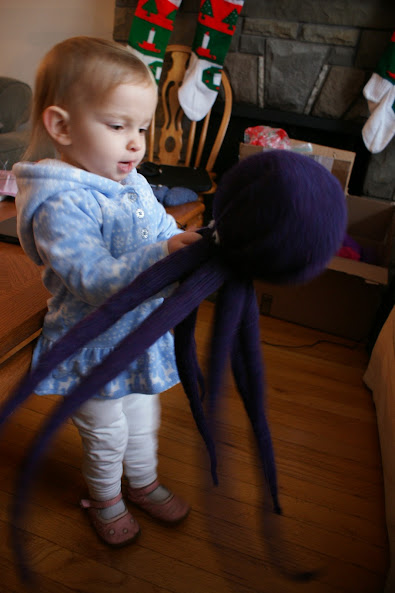 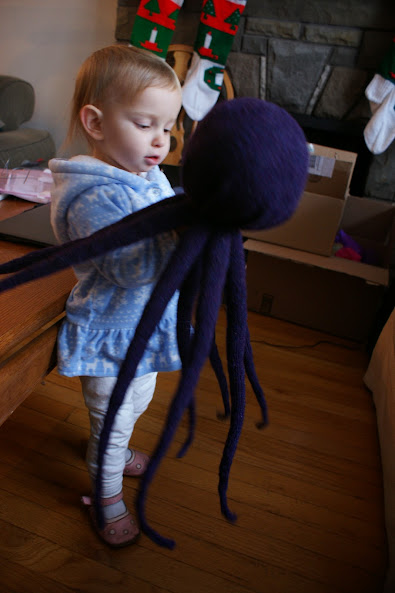 Seriously, its head is as big as hers, and the legs go down to her knees. And that’s the smallest version available in the pattern, called “Pulpo the Octopus,” from Knitting from the Center Out.

The pattern was clever; I find the engineering of stuffed animals to be strange magic beyond my reckoning, so I just obey. Except that I have super-short row-gauge, so I increased every third row on the head rather than every other. This might have rendered the head a little bigger, but it’s still very ball-shaped, so I’m not sure.

My only real complaint is that the legs took for. ever. The first one took me six hours. By the last one, I hat gotten down to three or four. Still, that’s like… 30 hours of my life on fussy little octopus legs. It’s a really good thing she loves it. 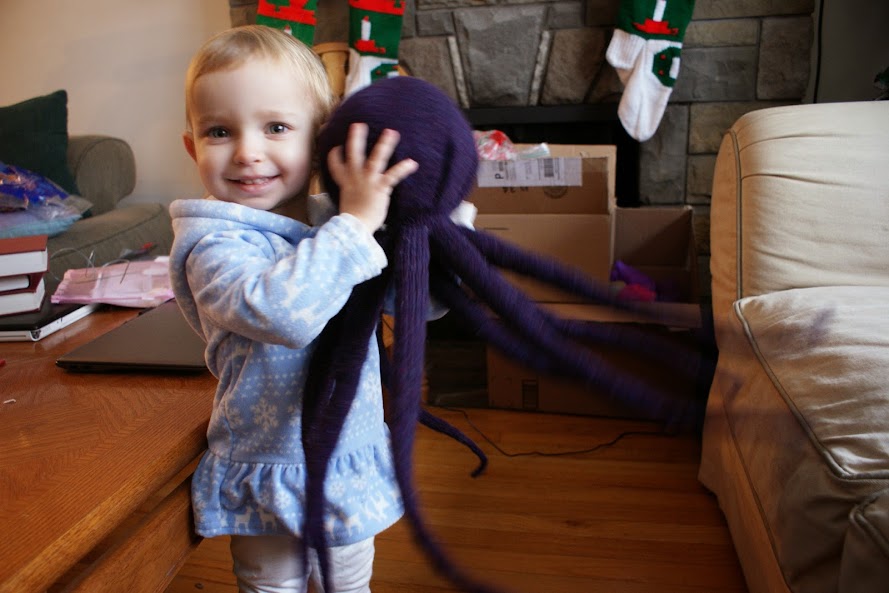 The yarn was one of the senior members of the stash, having been purchased during our yarn crawl in London in June of 2009. I got it at I Knit London, the yarn store that has a bar in the back. (Winning.) This was back before my yarn crawl purchases made any sense. I just bought three balls of this fingering-weight jamieson-and-smith-like fingering-weight tweed. For the simple reason that I liked the purple. The octopus used exactly two balls, with two strands held together.

It’s a bit scratchy, even for me, which was a tactical error considering this is mean to be snuggled with. Not that it stops N from giving the thing hugs. All the same, I should wash it with some conditioner or something. 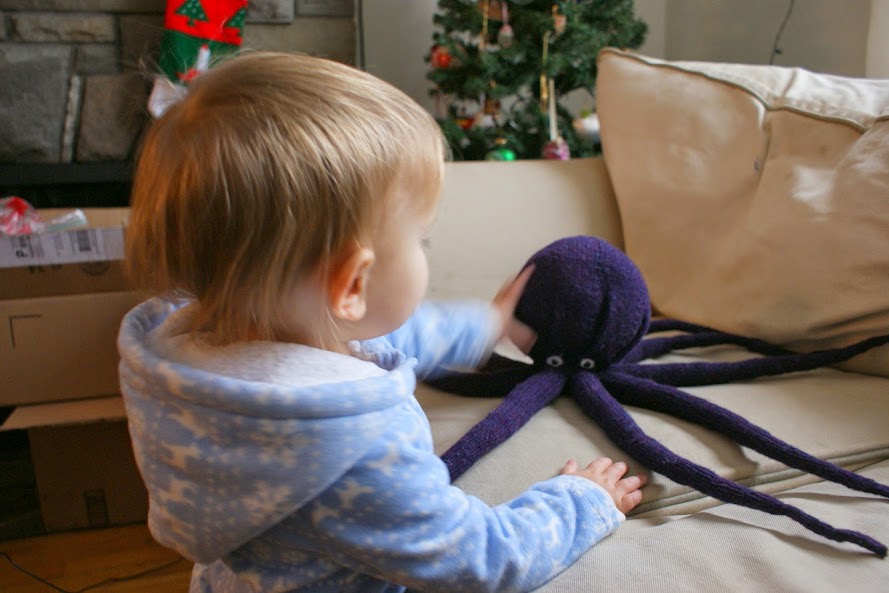 There’s a new octopus in town. And he/she needs a name. Suggestions?